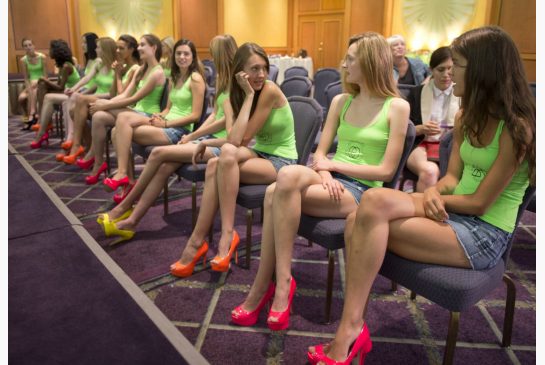 Despite the glamour inherent in the fashion world, those of us who work in its trenches are aware of the arena’s gritty underbelly: It’s a tough-as-nails business that sees countless beautiful young people clamour to climb on board its beastly bandwagon, hoping for a quick ride to fame and fortune. Most don’t get very far. But every once in a while, an exquisite creature, with a certain “je ne sais quoi”, captures the imagination of a photographer, editor or designer. And before you know it, a bonafide star is born. Toronto’s Elmer Olsen, a one-time model scout who runs one of the country’s most successful agencies, has an eagle’s eye for star potential, and has been instrumental in discovering some strong talents, and nurturing their careers. He hand picks girls—and boys—from across the country, and for the past six years, has put them through a two-day boot-camp where they get a crash course on the ins and outs of modeling, learning about everything from how to strut down a catwalk to how to eat nutritiously.

The most exciting aspect of Elmer Olsen’s “Boot Camp to Big Time” events as he’s dubbed them, is that they’re also attended by a host of seasoned scouts representing top agencies from around the world, all looking to sign novice models that have what it takes to rock the international runways. In the boot camp’s first year, Toronto’s Tara Gill got signed to a New York agency, and went on to walk in Jean Paul Gaultier’s show. The 5’11” Tara has since become one of this country’s most in-demand runway exports.

Elmer’s latest boot camp was held recently in the basement of the Metropolitan Hotel. I was floored to see this crop of 21 young lovelies, decked out in identical lime green tank tops, faded denim micro mini skirts, and neon patent stilettos, take to the catwalk with astounding finesse. There were 11 gorgeous guys on hand as well, but it was the girls who really impressed me with their seemingly unflappable confidence, ultra long legs, and utterly charming demeanours.

“That’s what it really takes these days—personality!” explained Olsen, just after hosting a Q+A session in which he brought some of his seasoned models on stage to field questions from the novices about the whys and wherefores of the business. “Editors, photographers, and designers all want to work with girls who are interesting, who have something to say. It’s not just about physical beauty anymore,” he stressed. “Girls today have to be well rounded.” Olsen does warn that there are certain physical necessities, like being between 5’9” and 5’11”. “And they have to have a certain frame, and a kind of unique look—but not too strange looking,” he notes. “If they don’t have what it takes physically, they should consider pursuing another type of career in the fashion business,” he advised. “Physicality is important for sure, but personal charisma really does count for a lot too,” said Olsen.

I was charmed to find myself surrounded by these young hopefuls, just before they strutted the catwalk for the 27 discerning scouts and agents who scrutinized them from their seats. The girls were eager to chat, and many had a lot to say about their passions for wanting to pursue a modeling career. Most concurred that it was the creativity of the job that turned them on, and they craved the opportunity to explore the world and meet new people. They’d been made aware of the perils of the business, and were happy to have learned that eating healthy foods, and eating regularly, was the way to have a sound body and mind. One especially stunning 16- year-old, Hayley McKee, from Ancaster, Ontario, who’d been “discovered” while walking down Queen St., had also already learned a little about making compromises. “They’ve changed my name to ‘Dauphine’”, she shared, proud of the exotic new moniker. Another 16-year-old, Cassidy Sadler, told me she’d been discovered in her high school play. “I’d like to work as a model, but really, I’m a writer,” she confided. “I thought the two things would complement each other,” she mused. I urged her to write a journal about her boot camp experience, and she promised she would. A sensational looking 5-foot, 10-and-a-half inch tall Somalian girl named Sadia was creating quite a stir among the agencies. “A few will be vying for her,” Olsen speculated. “She’s got a great look.” Olsen said it’s the cross-cultural mix of people that we have here in Canada that makes for such beautiful looking girls.

I hate biting the hand that feeds me, but as a parent, I’d be reluctant to encourage my kid to model. After all, there’s so much rejection that goes on in the business, I‘m not sure I’d want to see my daughter subjected to that. So I was surprised to learn that one adorable 20-year-old blonde, Vita Mikolajczak, a third year advertising student at Humber, had actually been prompted to try modeling by her parents, who hail from Vancouver. Vita’s mother, Barbara, sees the opportunity as a great experience, albeit an inevitably short-lived one. “Vita’s mature enough to know what she’s getting into,” explained Barbara. But what about all the rejection her daughter might have to deal with? “That kind of thing happens in the work force all the time. It’s something they have to face in life anyway. And besides, if it doesn’t work out, she can always just stick to local modeling here in Toronto, and keep on going to school.” In the meantime, Vita was making it her business to master those patent neon stilettos, and strutting the runway like she owned it.