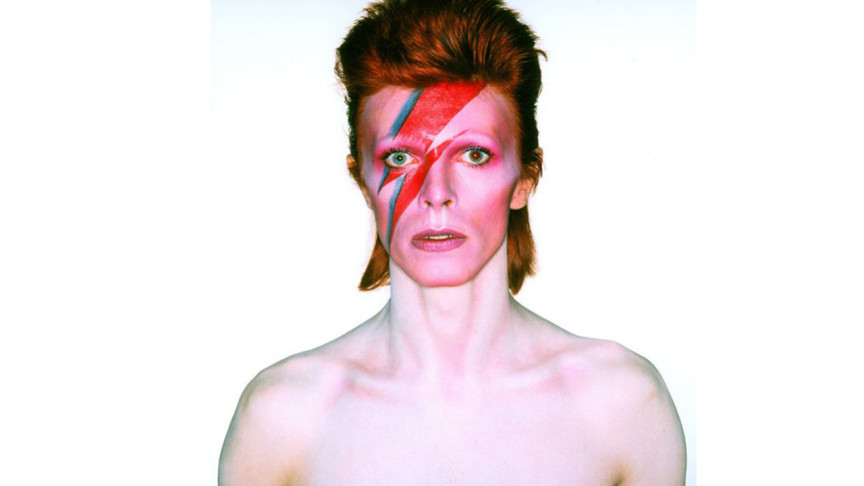 Style synthesizer, image innovator, re-invention master extraordinaire—David Bowie understood from early on that in fashion, the only constant is change. And while he mused in his 1971 hit “Ch-Ch-Changes” that “Time may change me, but I can’t trace time…”, London’s V&A museum has done a spectacular job tracing his multi-faceted 50-year career. The exhilarating exhibit, which opened last year, broke all attendance records at the venerable museum and next week, through ‘til the end of November, the Art Gallery of Ontario will play host to this remarkable retrospective. With over 300 objects, including 50 stage costumes, the presentation is a brilliant study of the style evolution of one of pop culture’s most important and innovative performance artists.

As an aspiring superstar in the early ‘60s, intent on transcending suburbia, Bowie began to cultivate his own brand of cool chic as he experimented with disparate musical approaches. By 16, the young jazz singer/saxophonist “Davie Jones” was already poised to make sharp sartorial statements with his band, The Kon-rads, elegant in a dark tailored suit, snappy striped tie and quiff ‘do playing into the mod zeitgeist. There was no question he knew how to work the camera.

With the new “Bowie” moniker, which he adopted in ’65, he set out to make it as a multi-faceted performer, even going so far as to do a commercial for ice cream. But more noble artistry and headier ideals got the better of him by the late ‘60s, when he met Lindsay Kemp, the British choreographer and mime artist, who became his lover and turned him on the power of corporal expression. Bowie also met America model Angela Barnett around the same time, who he married. And so the cross-gender sexual play began, at a time when social mores were morphing, romance was turning to decadence, feminism was on the rise, and out-of-the-box attitudes were gaining wider acceptance.

It was Kemp who introduced Bowie to Kabuki and the tradition of “onnagata” –male actors playing female roles. He began to see life as theatre of gender, and honed his skills as a dramatic poseur. It was during this time that Bowie developed a penchant for exotic costumes, and quickly learned of their transformational powers. The early ‘70s was a time for pushing boundaries, and Bowie’s dandyism and fantastic cross-dressing upped the androgyny ante, casting him in an appealing new light. In 1971, Bowie made the trek to Andy Warhol’s New York studio in shoulder-length blonde hair, floppy hat, and Mary Jane shoes. Bowie’s alien image soon began growing to freakish yet alluring new heights. When he appeared on BBC One’s ’Top of the Pops’ in 1972 with orangey red mullet-styled hair, painstaking make-up, red patent boots, and a quilted two-piece jumpsuit created by Freddie Burretti—inspired by the ‘droogs’ street gang in Stanley Kubrick’s A Clockwork Orange”—David Bowie’s new sexually ambiguous “Ziggy Stardust” persona had arrived. That otherworldly look and memorable performance changed the face of pop culture forever.

But it was Kensai Yamamoto, the first Japanese designer to show in London, who would help Bowie push his personal style envelope even further. Bowie first discovered Yamamoto in ’71, but was unable to afford his wares, so he simply had some of his concepts replicated. But after the incredible success of Ziggy Stardust, Bowie was able to commission Yamamoto to design some wildly flamboyant costumes for the impending 1973 Aladdin Sane tour. The outrageous results, inspired by Kabuki actors and Samurai warriors, were both sculptural and breathtaking, providing a new esthetic unfamiliar in the west. Coupled with Pierre Laroche’s striking ‘lightning bolt’ make-up design, yet another new Bowie persona was born.

The 1974 Diamond Dogs album heralded a shift in style for Bowie, and the end of the glam rock era. Elegant, dapper, and profoundly sensual in a Spanish cordoba hat, high-waisted gaucho pants and platform boots, Bowie was abandoning bizarre glitz in an effort to combat the mindless disco noise of the times. Yet the resulting tour for the Diamond Dogs album was one of the lavish rock extravaganzas ever staged, evoking a dystopian urban underworld where, once again, theatrics reigned supreme. The razor sharp tailoring of the suits Bowie wore continues to inspire myriad designers from Hedi Slimane and Jean Paul Gaultier, to Gucci creative director Frida Giannini.

With the release of the 1976 album Station to Station, notions of 1920s Berlin surfaced, as Bowie re-invented himself yet again as the Thin White Duke. His enthusiasm for fame was waning, and the white shirt, black trousers and vest, and slicked back hair spoke of a new style simplicity for the superstar, preparing him for his subsequent move to Berlin, where he lived in relative obscurity for several years.

But not one to abandon showy costume for long, Bowie resurfaced in 1980 as the naive and romantic clown Pierrot, a melancholy figure from the17th century commedia dell’arte, for the monumental “Ashes to Ashes” video, reminding us again to take music lightly, no matter how serious its message. As for fashion, Bowie always maintained that he wasn’t really interested in it: He merely wanted his music “to look how it sounds”. And so he artfully used clothing and costume over the past five decades to trumpet attitudes, emotions and energies. His contemporary piece de resistance is the magnificent Union Jack coat which he co-designed with the late, great Alexander McQueen for the 1997 Earthling tour. It projects the best in classic British tailoring with an irreverent punk attitude, and makes as chic and powerful a statement as any piece Bowie ever strutted.

David Bowie’s style legacy is profound: He shook us out of the complacency of the ‘70s, and made made it fun to dress up at a time when grunge threatened to rob us of elegance. He helped bring glamour back into vogue, reminded us of fashion’s ability to instruct and transform, and taught us that fearlessness in sartorial expression is imperative when it comes to keeping up with life’s constant changes.

So grateful to be able to share my thoughts about my current cancer journey in ⁦@HelloCanada⁩ ❤️🙏🏻 hellomagazine.com/ce…

Adore Kate Moss for SO many reasons: In a recent ⁦@BBC⁩ interview, she revealed in unflinching detail how she fled… twitter.com/i/web/st…

A joy being on @zoomerradio to discuss my cancer journey thus far… Thanks to @samhinthecityand @JaneBrownNews for t… twitter.com/i/web/st…

I’ll be on @zoomerradio at approx 8:50 am EST with @samhinthecity and @JaneBrownNews to talk about my cancer journe… twitter.com/i/web/st…

Great pleasure telling the story of @DrBenBarry Dean of Fashion @parsonsdesign who happily spends his down time in… twitter.com/i/web/st…