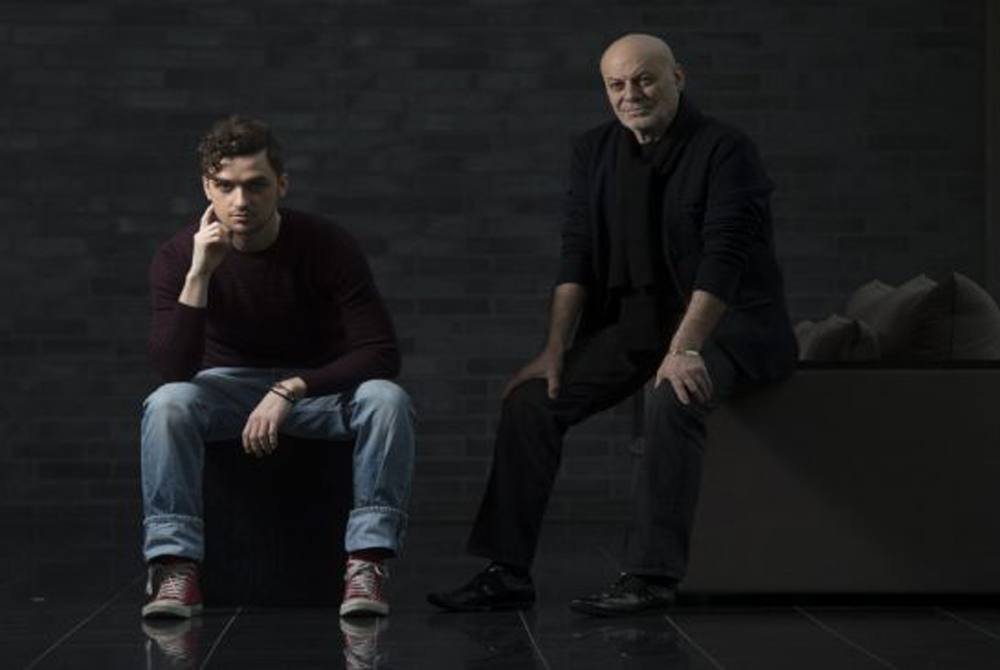 With eclecticism the operative word in fashion today, Toronto’s World Master Card Fashion Week promises to be right on trend. Some 27 disparate labels will be vying for the attention of media and buyers, each designer eager to make an indelible mark on the burgeoning Canadian fashion landscape. And while some of this country’s brightest fashion lights may not be participating in the action down at David Pecault Square, organizers IMG are determined to present a colourful week, inviting and helping diverse talents who might not normally show, to toss their hats into the ring and strut their stuff. I recently met up with Stephan Caras, one of our country’s most seasoned designers, and 26 yr. old Matthew Gallagher, one of its newest, to discuss what it takes to make a mark. While Matthew just moved back to Toronto from Milan, where he’d been studying fashion and interning at a fashion house, the Greek-born, Australian-educated Caras has been designing his own label in Toronto for decades, and selling out of an exquisitely renovated shop on Queen St. East, in his converted 1905 bank building. This week will mark Caras’s first full-scale Toronto runway show in many, many years. For Gallagher, it’s his catwalk debut.

JB: What was it that made you decide that you’d finally show at this formal Fashion Week in the first place?

SC: Well, when I came here from Europe, decades ago, I was president of a group of designers called Toronto Designers Association, and I tried to create a kind of fashion week. In those days, the designers would just get together in hotel rooms with an outfit each, and show to the press that way. They thought I was crazy at the time, talking about runways… I got very involved, but I felt that Canada wasn’t really the place to be doing big, serious, fashion business. The market wasn’t big enough.

JB: Yet you still decided to stay in Canada and make a go of it.

SC: Well I love Canada. It felt like that was my destiny. And I realized my business could be international. I didn’t have to be confined. So that’s how I started to work and show my collections in the US. And today, eighty percent of my business is in the US…

JB: But why did you decide that now was a good time—the right time—to get back on a Toronto runway?

SC: I want to be part of the Canadian fashion scene. But the waters haven’t been right until now. The fact that IMG is taking control of it makes sense. It’s a serious event now, and I believe since IMG is involved, it will become a little more international than it has been.

JB: And for you Matthew, why did you think it was the right time for you—just out of the gate—to actually have a show?

MG: I’ve always wanted to have my own thing. I did internships in Milan, but you spend so many hours working for someone else’s dream. Now, after having been in Europe, I finally felt prepared. So when these people said they’d help me and be a great support system, I thought it’s really the best option. Plus I’m from Canada so I thought where better to do your very first thing and start there? If I have the support of other Canadian people, then who knows where it can go?

JB: Are you nervous about it?

JB: And what about you Stephan? Are you nervous at this stage in the game?

SC: Nervous in a way. I get nervous with every collection. But I design to express myself and express women’s sensuality. And I’m not nervous once I achieve something that looks like it expresses the way I feel. Then I’m happy to show it.

JB: The business has changed so dramatically. Retail has changed, women have changed, the way what we want something, and how quickly we want it, all that’s changed. But what would you say is the biggest change you’ve seen in fashion these past few decades, Stephan?

SC: The Internet. Today it connects the world. I found that out as soon as I started to show outside Canada, where people pay attention to fashion. It gets online and people reach out to you. I was astonished. I started receiving calls from Argentina, Sweden, Germany, Australia, the Far East, Philippines, Japan, because I did a show somewhere and it traveled. And people start asking where they could buy our clothes. We have a great following because of the Internet.

JB: And for you Matthew, Have you spent a lot of time thinking about how the Internet may dictate some of the things you’ll do?

MG: I first want to get the ground laid before I start thinking about all that. But even in Milan, when I was doing small collections—five or six looks, just in my bedroom—I would post them online and I tried to do a lot of social media because that’s the only way I had to get my stuff out there. Then I’d get people contacting me from other countries, asking where they could buy my things, asking for a catalogue. And it’s like, “Well I work from my bedroom. I don’t have any of that stuff!”

SC: We’re preparing a site right now, and we’re going to be selling online. That is where the future is. We cannot be Dior or Gucci because of the financial backing that kind of business requires. So if we can’t open up stores in every country, the Internet can do that for you. I mean twenty years ago, to get this exposure I would need hundreds of thousands of dollars to advertise, which I couldn’t afford to do. But this happens for free today. People can know you all over the place.

JB: And how does all this affect your business, Matthew?

MG: Because the Internet shows exposes your work to everyone, all over the world, I’ll have to move a lot faster and be prepared if a retailer wants something. I’m making and paying for everything on my own now. Other than fashion week, I don’t have any support system behind me, except my parents of course. So it’s a challenge for me, because I have to find fabrics that are luxurious, but can I get a good deal? Things like that.

JB: You’re actually sitting there sewing some of the stuff by yourself?

MG: Everything! I’ve had friends help me with hems, and zippers, because I didn’t have the time, but yeah….I’m pretty much doing everything on my own.

SC: Yeah, I remember those days too!

SC: But I love what I do. I still work twelve, fourteen hours a day, seven days a week. I just cannot get away. It’s like a passion that I cannot pull away from.

JB: So what would you tell Matthew about what to expect from this beast we call fashion?

SC: Unless you have a passion and are prepared to dedicate your life to this, get out of it. Young kids have the wrong impression of this industry. They think fashion design is glamorous. And when they get into it, they realize it’s impossible to go through it. If it wasn’t for my passion, my technical knowledge in construction, production and everything else I control, I would not have survived. Just putting in time is not enough. If you don’t know what you’re doing, it doesn’t matter how much time you’re putting in. That’s what I advise my own son, what I’d advise Matthew, and anybody else. Times have changed. These kids may not be as prepared as we were to dedicate our life to the business

JB: What do you say Matthew?

MG: I like every aspect of the business. I want to put everything I have into it. I want to dedicate my life to my brand. I know a lot of people in my class that didn’t really have the drive that it took. They liked the idea of success, but it has to come down to the blood, sweat, and tears…

JB: What do you think makes a great fashion show ultimately?

MG: I think if people can get the mood and get the message that you want them to get, then you’ve been successful because you can really do a lot with music and with lighting. The whole mood in general has to fit, and people have to leave there feeling like they got it.

JB: And for you Stephan? What would you say makes a great show?

SC: I’m all about chemistry—the right mix of design, models, environment, and the people. You can have the best clothes on the runway, but if you don’t have the right models who exude what you want to say, you won’t send out the right message. If the chemistry’s there, I know it’s going to be fantastic. It’s just a perfect balance. I don’t know… Sometimes I’m a dreamer.

JB: I think you have to be a dreamer to be in this business.

JB: Well, good luck to both you. It’s going to be a great ride!

(Matthew Gallagher presents at WMC Fashion Week Thursday the 21st at 4pm, and Stephan Caras shows on Friday the 22nd at 7pm)