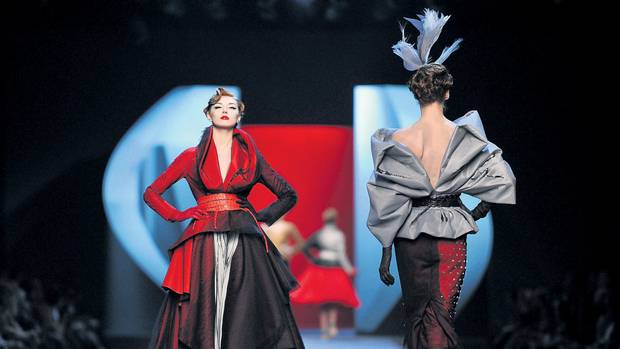 Inside a courtyard off Place Vendome, fashion fans have gathered, compact cameras and cell phones in hand, poised to capture every last bit of the inevitable glamour. Giorgio Armani’s guests have started to arrive for the red carpet master’s spring couture offering, and there’s bound to be at least a couple of major celebrities on his list. The fans aren’t disappointed. Academy Award winning Jodie Foster, slated to preside over the French Cesar Awards, France’s version of the Oscars, on Feb. 25th, creates a stir: This is her first fashion show, and she’s made it Armani for good reason. “ For him, it’s always about the woman he’s dressing, not just putting her in an outfit. He’ll never make you feel like a clown,” she tells me. Next up is Olivia Wilde, who stars in “Tron: Legacy”, and who made a splash at the recent Golden Globes in a sparkling copper Marchesa number. “It has to be about making a statement!” she states with conviction. Suddenly, a frenzy of flashes announces the arrival of forever radiant and voluptuous Sofia Loren, a long-time Armani fan, who later tells me that the glamour on the red carpet has never changed over the years. “It’s always about dreaming,” says Loren. “And nothing makes us dream more than couture.”

But even the most costly glittering gowns run the risk of looking redundant in an arena where everyone vies for standout originality. Maybe that’s why Armani went out a futuristic limb this time, concocting a bold “Prive” collection based on space-age glam, complete with sleek Philip Treacy hats reminiscent of minimalist flying saucers. In what appeared to be an ode to early Cardin, or perhaps Lady Gaga, (whom the designer is dressing for her upcoming North American Monster Ball tour, which kicks off next week), Armani sent out a stream of gleaming ensembles, many in rich jewel tones of emerald, sapphire, and ruby. “Those shiny materials looked like plastic to me,” shared Foster. “But I couldn’t believe it when I felt them backstage… They were all soft and silky.” The sleek silhouettes came down the runway in the form of sexy, streamlined gowns—always flattering lines for the TV cameras—and modern, two-piece outfits featuring skinny pants and tunics.

Over on Rue Cambon, easy, modern dressing was also the name of the game at Chanel, where Karl Lagerfeld mixed unexpected pieces in fresh new ways. There was some interesting layering going on, with sparkling, roomy tops teamed with delicate chiffon skirts, sometimes worn over glittering leggings. In a bid for younger, more spirited client-base, which Chanel has been building quite well, sexy, sequined leggings and skinny faded denim jeans made a strong showing. The jeans were especially charming, with rows of crystal buttons running up the ankles and shins. And the flat black patent mules, secured to the foot with transparent bands, spoke of a relaxed ease. But the most striking aspect of this collection was the workmanship of the ateliers, and the spectacular iridescent beading that Lagerfeld’s muse and creative collaborator Amanda Harlech described as “an embroidery of light”. Many of the dresses and tops also had short little sleeves, a kind consideration to some of the older gals who swear by the label.

But Karl’s adoration for stylish women at every age came through in other ways: He opened the show with 40-year-old aristocratic model Stella Tennant, and closed it with the 46-year-old quirky favourite Kristen McMenamy as the bride. “I almost cried coming out in the wedding dress,” Kristen confided. “Do you know that Karl actually gave me away at my own wedding in London 12 years ago?” But it’s more than sentimentalism that’s driving Lagerfeld this spring. “The new Chanel campaign stars three different generations of models,” Lagerfeld boasted. “Freja (Beha Erichson, the 23-year-old Danish model), Stella and Ines (de la Fressange). That’s reality.” “We’re all aging,” noted the 53-year-old Ines. “We just have to look at ourselves in the mirror and love and accept who we are.“

Women of all ages also strutted it for Jean Paul Gaultier, who embraced both punk and the can-can in one of the most entertaining presentations of the week. “Just because it’s something like punk and can-can doesn’t mean it can’t be chic and elegant,” the designer told me backstage. Despite the wild Mohawk hairdos, and a generous helping of sass and sensuality, thanks to fringes, transparent mesh, and plenty of ruffles, Gaultier’s show smacked of the haute sophistication that couture is famous for. In an approach reminiscent of the early days of fashion, there was little music in the show. Instead, Gaultier’s models—which ran the gamut from his first muse, Farida Khelfa, sensational at 48, to Toronto-born Kate Somers, to Czech supermodel Karolina Kurkova, to Australian drag queen Andrej Pejic, cast as Gaultier’s bride—all cruised down the catwalk to crisp, descriptive commentary, masterfully voiced by long-time Gaultier supporter Catherine Deneuve, who looked on from her front row seat. The eclectic collection, which included small lace bomber jackets, ruffled gowns, a fancy, black taffeta trench worn over layers of tulle, a colourful brocade “smoking” jacket and pants, and a crystal-studded sheer jumpsuit with a mini cape, was Gaultier at his best: imaginative, playful, and timeless. And despite some of the theatrics, including an actual can-can dancer kicking up her mega skirt all down the runway, the broad range of clothes was mostly wearable and practical. “And look at this crazy hair,” Gaultier excitedly pointed out backstage, showing off the campy broom-like Mohawk. “If you’re tall enough, it will clean your ceilings!” he laughed, all in the name of functionality.

Meanwhile, the two designers at Valentino had another kind of practicality in mind when they created their vision for spring. Maria Grazia Chiuri and Pier Paolo Piccioli were determined to give their increasingly young clientele a hearty dose of sensuality, while at the same time delivering timeless dresses that were easy to wear. Silhouettes were diverse, but most had a relaxed feel. And in an obvious attempt to appeal to the red carpet crowd, the duo concentrated on flutter and flow, dishing up some of the prettiest concoctions of the week, in delicate powder shades of blush and beige. A soft green-feathered coat provided some delicate punch, while signature Valentino red cropped up twice, in both long and short form dresses. “We especially wanted to highlight the workmanship of our own Italian ateliers,” said Chiuri. Intricate embroideries and appliquéd organza flowers added a sweet and feminine touch to the collection, and underscored the message that Valentino’s legacy is being well-respected by his successors.

Historical reverence is also high on John Galliano’s agenda, as he continues to pay homage to Christian Dior by referencing everything from his master’s revolutionary silhouettes to Dior’s own muses and inspirations. This time, under the big top on the grounds of the Musee Rodin, it was legendary Dior illustrator Rene Gruau who Galliano celebrated in a grand and romantic collection that smacked of ‘50s sensuality. It was all about graceful lines, and plays on light and shadow as Galliano attempted to capture the spirit of the artist’s strokes and evoke feelings of haute poetic elegance. Stephen Jones’ headpieces elevated some outfits to even greater heights, replicating Gruau’s simple, bold brush strokes that resembled wafts of smoke. Ostrich feathers and iridescent embroideries added to the fantasy, as Galliano luxuriated in a rainbow palette of ruby red, emerald green, raspberry, soft blue, and pink. And beige never looked so beautiful. The effect of degrade tulle, used in just about every look, played with the light and made each garment come alive. But it was the opulent grand ball gowns that truly stole the show. Judging from Galliano’s backstage comments about his personal relationship with Natalie Portman—a new face for the house—it’s a pretty safe bet that the Oscar-nominated actress will be strutting Dior on the red carpet on February 27th. And while the cinched waists will not be appropriate at this stage in her pregnancy, Ms. Portman would undoubtedly look smashing in one of these artful custom creations. There was one architectural, pale gray strapless gown that practically had her name on it. Stay tuned.

But as grand a spectacle as Dior’s show was, and as much as the dwindling number of couture houses are determined to keep things big and splashy in the name of “image”, there’s a new wave of thinking creeping into the moneyed couture culture: Some younger couturiers feel smaller and more intimate is the way to go. Givenchy’s Riccardo Tisci chose to present a mere 10 Japanese-inspired dresses to his clientele in the privacy of a small salon. Cameras weren’t welcome. And Giambattista Valli, who closed couture week with a swish cocktail party at his stellar new shop near the Madeleine, chose not to stage a presentation at all. Rather, he’ll entertain his couture clients in the intimacy of his atelier, located atop the 1,500 square foot ready-to-wear boutique. (According to reports, Reese Witherspoon recently paid a visit there, on the hunt for a wedding gown.) And as the throngs of international fashion cognoscenti sipped Perrier Jouet out of crystal goblets in his rose-filled garden courtyard, Valli gave us all something to think about, smugly proclaiming, “Privacy is the new luxury.”