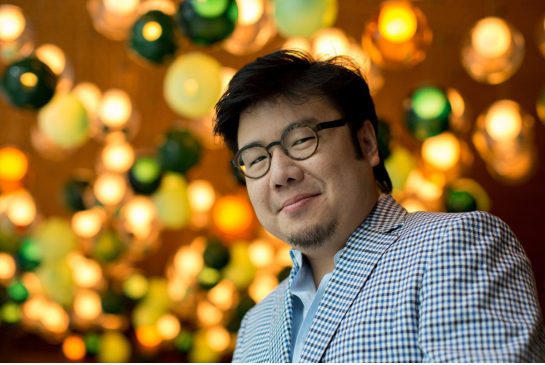 Plunging headlong into summer usually demands some juicy reading material. If you’re the sort who loves being swept away by jet set stories of the fabulous life, complete with larger-than-life characters, fantastic fashion and plenty of inter-generational strife, Kevin Kwan’s satirical “Crazy Rich Asians” might deliver for you. It’s packed with the kind of outrageous, over-the-top imagery and that’s bound to keep you on the edge of your beach blanket. Even the mighty Vogue magazine has deemed the debut novel “the summer’s splashiest read”. Set in Singapore, the so-called “Switzerland of Asia”, with numerous jaunts to exotic locations like Hong Kong and Paris, the Dynasty-style saga focuses on three different Asian families and the mad swirl surrounding one of the most lavish weddings imaginable. Kwan, who was born and raised in Singapore, but moved to New York to study photography and design, delights in poking fun at uber-rich Asian society in this labour of love project, which he says has been percolating for the past 20 years. Kwan paid a visit to Toronto this week, and I caught up with him to chat about the book that has fashionistas buzzing.

Jeanne: Reading your book, I just kept thinking that this guy really gets what this scene is all about, and must have seen it from the inside out. Describe your life growing up.

K: It was a combination of being very normal and idyllic but also strangely fantastical at the same time. That’s what I tried to capture in the book. I grew up at a time in Singapore—the ‘70s and ‘80s—where it was still possible to go riding around the island barefoot. And I was one of these kids that was just climbing trees and running around the neighbourhood. But then there would be these other moments where I’d be taken to these amazing parties and these fabulous houses and even then I had a strange consciousness that this was not normal. It’s not normal to go into a house and see a pond in the middle of the living room full of baby sharks. It’s not normal to go to someone’s garage and see a private plane. So the synapses were firing a little bit. But it wasn’t really until I moved to America that I was able to understand that what I had as my childhood was not normal.

J: It’s hard to tell how much you’re exploring that world out of love, or how much you’re really thumbing your nose at it. All this talk of designer labels, and the insane amounts that people are willing to spend for just the right dress! What was all that like for you, as a kid?

K: My mother likes to say that I was conceived to shop—not just born to shop. My whole life as a child was following her and her sister and friends around on her shopping trips. I’ve probably spent more time in jewelry stores around the world than you can possibly imagine.

J: Did you ever go to couture fittings at ateliers?

J: I could tell by the way you were writing about it.

K: I’d be falling asleep sometimes, because when you’re a kid, only so much interests you. I liked the candy they gave me and the soft drinks I got to drink when I was at those places. But other than that, I wasn’t really that interested. But when I got older I went to design school and really developed an appreciation for design. I think it’s pretty evident in my book when I describe the houses and even the food is high design. But of course we’re poking fun at people who love to name-drop a mile a minute and people who like to dress head-to-toe in Louis Vuitton or Chanel. It’s kind of ridiculous.

J: What is it saying about our society at this particular point in time, that we are so fashion-obsessed and we have become such materialistic creatures?

K: I’m not a sociologist, so I can’t tell you what the deeper implications are. But there are different types of Asians. There are old money Asians that would never be caught dead with a Chanel handbag or sporting anything that has a label it. But for a lot of Mainland Chinese, who have suffered so much over the past fifty, sixty years and been under this repressive government, there’s a new freedom to spend, and there’s new fortune. I mean you can’t really blame them for wanting to enjoy their money a little bit, and if you’re happy wearing what you’re wearing, more power to you.

J: That is quite amazing to think what’s happened in China. Ten years ago there wasn’t even a single billionaire!

K: And now there are a hundred and twenty-two! And fast taking over the US in terms of number of millionaire and billionaire households. So the money being made in Asia now is kind of phenomenal.

J: And then you think of how European and American design houses are scrambling to please that particular market…. I remember about five years ago, being backstage at a Dior show to interview Galliano. I was always one of, if not the first to get a TV interview with him after his show. But that year, all of a sudden, it was: “Hold on a minute! We’ve got three Chinese crews first that we have to deal with.” And I went, “Chinese crews?! What do you mean? We’ve been here for like twenty-five years!” So, yes, that change has been really interesting to see. There’s also a lot of pain in the book, in terms of these kids wanting to somehow please their parents. But there’s just no way at all that they’re going to be able to.

K: They’re caught between cultures and generations. You’re going to see that more and more especially as Asia westernizes. The expectations are changing especially with wealthy families who mainly do send their children abroad to Australia or Canada or the UK for studies. When they come back, they are still expecting these very traditional Chinese children. But they’re not getting that.

J: The book is so visual, and you can see so much in your mind’s eye. Did you foresee a TV series down the road? Is that what you were writing it for?

K: Something like Downton Abbey would be a dream, to have a really nice, well- produced mini-series. I think you need that to really get into the lives of all the characters.   I’d love to make that happen.

J: Any offers yet?

K: My lips are sealed (laughs)