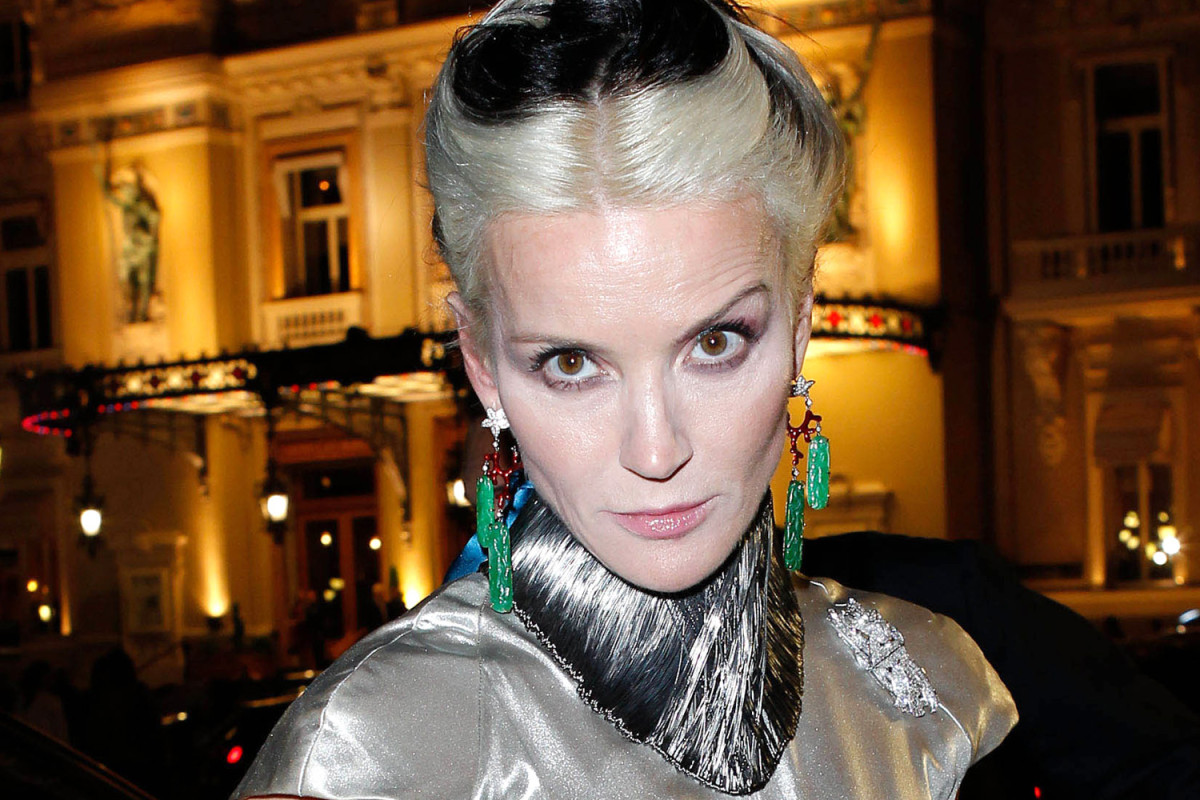 “She didn’t design any of these clothes, dear. She just wears them.” I had to chuckle when I overheard that succinct explanation coming from a woman who was taking her husband through the treasure trove of sartorial artifacts on display at The Museum at FIT in New York. The gentleman, clearly bedazzled by the range of spectacular outfits, was immediately intrigued to find out more about the exuberant fashionista behind the sensational style choices. With museum exhibits having become fashion’s hottest tickets, (the MET’s recent Alexander McQueen exhibition drew record-breaking crowds), it’s fitting that the personal style of one of, if not the most inspiring and unique fashion icons in the world today is being celebrated. Britain’s 43 year-old Daphne Guinness—Iris brewery heiress, avid couture collector and true aficionado of haute mode—is in a league of her own when it comes to supporting the visionary, often avant garde work of designers, and her sublime sense of aesthetics, coupled with her brave choices, have made her one of the greatest influencers in modern fashion today. A fascinating exhibition of approximately 100 pieces from Guinness’s personal wardrobe recently opened, and for fashion enthusiasts who appreciate fearlessness, unconventionality, and eye-popping craftsmanship, it’s a must-see.

The collection of ensembles, which represents some of the world’s most brilliant couturiers, including Karl Lagerfeld, Valentino, Christian Lacroix, Azzedine Alaia, Rick Owens and Gareth Pugh, was culled from Guinness’s wardrobe of over 2,500 pieces. (She boasts 450 pairs of shoes, 70 hats, and 200 handbags.) Also featured in the show are more than two dozen McQueen garments that have never been displayed before, and numerous outrageous accessories, such as jewelry by Shaun Leane, towering shoes by Christian Louboutin and Noritaka Tatehana and hats by Philip Treacy, some of which Guinness collaborated on. But as courageous and outlandish as many of Guinness’s fashion picks may be, the lady herself is rather shy and gentle. When she walked into the FIT exhibition on the recent opening night, accompanied by Oscar de la Renta, and wearing a glittering and edgy pewter ensemble by 22-yr old Hogan McLaughlin, a designer she met on Twitter, she admitted she was nervous about the show. “Do you like it?” she asked me, with some trepidation. “You know, it’s very strange to see bits of yourself on display.” Guinness worked with FIT’s Dr. Valerie Steele to curate the exhibit. It was a daunting task that took nearly two years, though Steele says Guinness is very well organized. “I had the great pleasure of going through Daphne’s closets, both in New York and London,” explained Steele. “But she has many things photographed, so the first thing I did was go through her computer database of her fashions.”

I asked Guinness if she ever fantasized about becoming a style icon when she was a little girl. “No,” she replied adamantly. “Absolutely not. No, that was the last thing on my mind. Actually, I was always trying to hide, so having this exhibit is probably the worst thing I could possibly do!” she laughed. Guinness has explained in the past that for her, fashion is a kind of armour and protection. “That implies a certain kind of vulnerability,” notes Steele. “But Daphne works very much from instincts. She really doesn’t think about what she’s going to wear ‘til about five minutes before she goes out the door.” I once asked Guinness what it was that really grabbed her about a piece of clothing, that made her want to have it. “It’s like seeing a butterfly for the first time,” she reflected. “It’s just an inexplicable, magical feeling that comes over you.”

It’s been a difficult few years for Daphne Guinness. Her best friend, the eccentric British fashion editor Isabella Blow, herself a major style icon, tragically took her life in 2007. Two years later, another of Guinness’s closest friends, Alexander McQueen, whom Blow discovered, also committed suicide. Last year, Guinness bought Blow’s entire wardrobe, in an effort to keep her dear friend’s astounding collection intact, and she has future plans to put that on display as well. “Now I can get a handle on Isabella’s collection, and really show that properly. But it’s been a very difficult time for me, with the McQueen exhibition. I really get goose bumps, just thinking about all of these things that have happened in the past 4 years. It’s kind of bizarre… A lot of my crowd isn’t here anymore. I miss them so much. And one could just disappear behind all that,” she said wistfully. But instead, Guinness is adamant about sharing their legacy, and claims the whole point of her own show is to inspire fashion students. Her main message is about individuality and celebrating the human spirit. “Human beings are the only creatures that can style themselves and wear clothes. And it should never be about what’s in season, and what’s not,” says Guinness. As a testament to the power of simply going with one’s gut, she adds, “I don’t really know what’s in season. Not ever.” That’s a notion that Steele applauds when it comes to the subject of great style. “Although Daphne certainly has perfect taste,” says Steele, “she’s also somebody who’s not afraid to let that go out the window in pursuit of a fantastic fashion look.”

(The exhibition “Daphne Guinness” is on at The Museum at FIT in New York City thru ‘til January 7, 2012)

(There is also an accompanying book by Valerie Steele, published by Yale University Press..)