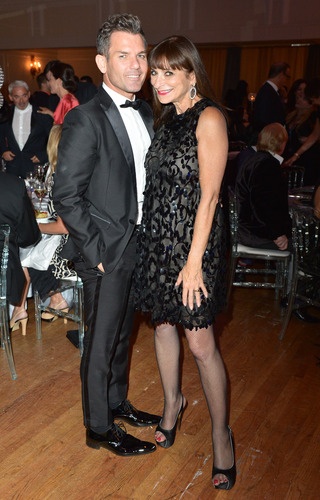 It’s long been said that what doesn’t kill you makes you stronger. Such was the case with Toronto’s fashion community in those early days of the AIDS epidemic, when friends and brothers and lovers succumbed to the dreaded disease on a horrifyingly regular basis. We looked into the frightened eyes and held the emaciated hands of so many we loved. And we knew in our gut it was up to us to slay this monster that was robbing us of our best and our brightest. So we rallied every ounce of our fighting spirit, and mustered the courage to put on our strongest fighting face. Because our arena was fashion—a world rife with glamour and illusion, where beauty knows no bounds and the right tube of lipstick and pair of stilettos have the power to lift one to untold heights—our battle cry became this annual evening of unbridled creativity and dressing up, an ode to haute fantasy dubbed “Fashion Cares”. We all poured our passion and sense of sartorial fantasies into the special night—one that over the decades would become the most anticipated of the year.

Serendipitously, around the same time that Fashion Cares was launching, our show “Fashion Television” was just hitting its stride, and I’d made my own way into the wonderful wilds of the local fashion community, managing to befriend a number of its talented members, and enthusiastically covering each and every annual evening with TV camera in tow. Before long, I had the privilege of being named honourary chair of Fashion Cares. And with the personal generosity of the late, great Frank Angelo—co-founder of MAC cosmetics—I began to produce a half-hour City TV specials on the event. My most exhilarating moments were the time spent backstage, with all those beautiful boys and girls. It was artistic mayhem, with scores of volunteer models, make-up artist, hair-stylists and designers exuberantly embracing the cause and pulling out all the creative stops. Mic in hand, I listened to their personal tales of those they’d loved and lost, the horror stories of the mini holocaust in their midst. And I instantly understood why they would never give up—could never give up—until this thing was licked.

One dear friend, a hugely talented local jewelry designer and make-up artist named Terry Wood, became my personal hero in the light of “Fashion Cares”. Terry took great delight in helping me get ready for the event in those early years, weighing in on my decisions of what to wear, making sure I had the right accessories, and doing an ultra glam job on my make-up. I remember the glorious yellow floral hair ornament he made for me the year we staged “Fashion Blooms”. When Terry developed full-blown AIDS in 1988, I watched desperately as he tried every experimental remedy suggested, and I marveled at his constant optimism and unwavering hope that the cure for this demon disease was just around the corner. He was hell bent on hanging in ‘til they found it. But a couple of years later, Terry lost his fight. When he passed on, I vowed to party harder, dance faster, and dress more beautifully at the next Fashion Cares, because I knew I’d be doing it for the two us. Sure enough, Terry’s spirit was right there with me—remains with me to this day—cheering me on, and forever lapping up every fabulous fashion moment.

Enthusiasm for Fashion Cares escalated as the years went by, and those of us who’d been with it from the beginning derived a special pleasure from seeing so many prominent corporate sponsors clamour to come on board. The stigma associated with AIDs that had put up such roadblocks at the beginning was dissipating as awareness grew, and each year, the creative team responsible for masterminding the evening, led by MAC’s talented and tireless Phillip Ing, came up with increasingly brilliant themes: “Future Perfect”, which catapulted us all into a Space Age mindset, “Salute to Suburbia” which conjured up memories of my Downsview childhood, “Arcouture”, staged at the dramatic BCE place, and “Wings of Life”, which poignantly paid homage to all our special angels, were among my favourites. Then there was the year I was surprisingly invited on stage for an impromptu serenade by the sexy Jarvis Church. This was my idea of heaven, and the powerful singer got down on his knees and wailed an exquisite love song before the roaring crowd. It was an evening where we all felt the love.

This past go ‘round, at the impressive Sony Centre, I got to re-live some of the inimitable Fashion Cares magic of that night, long ago, when Jarvis sang to me. I was sitting backstage, waiting to come out for another little intro I was slated to do, when I heard Jarvis out in the house, calling my name. Molly Johnson screamed, “Get yourself out there, girl! He’s asking for you!!!” I ran out on the stage, and started waving frantically. Jarvis turned around, saw me, jumped back on stage, and started serenading me as sweetly as he did way back when. I was blissed out. Fashion Cares had delivered yet another fantasy for me. It’s never let me down.

We’ve all changed so much this past quarter of a century. The fashion industry has changed too. Sadly, AIDs is still with us: People are living longer with HIV, but the beast has not yet been slain. And so, one more time, we dug deep into our hearts and banded together for one more communal, creative shout out—a night of memories and magic and passion and love—for what we do, for those we’ve lost, for a new generation we pray is never affected.