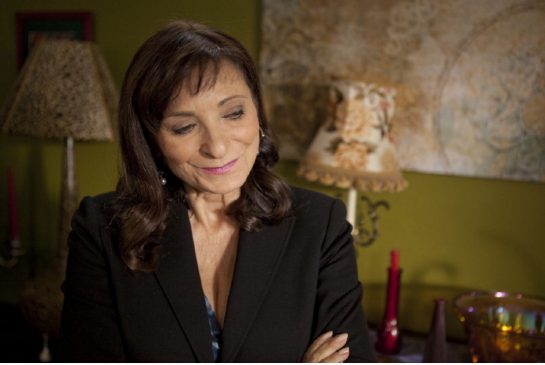 My life is filled with fantasies, and every so often I pinch myself over the sheer poetry of what comes to pass—how the universe never fails to send me what I need to get me through the night. Losing my beloved dog earlier this month had put me in an emotional place, one in which I’ve been feeling sad, vulnerable, and anxious. So how serendipitous that an acting project has come my way! While I used to act in my younger days, the most recent acting gig I had was in 2010’s “Love, Loss and What I Wore”, staged at Toronto’s Panasonic Theatre. But now I’ve been asked to star in “Two Square Feet”, a six minute, 35 mm film written and directed by Newfoundland actress/playwright/director Ruth Lawrence. So last week, I headed off to The Rock, aka my old stomping grounds of St. John’s, to morph into a new character, and see the world through a different lens. I’m playing “Pearl”, a world-weary woman who’s just run away from home. She’s sexually repressed, has no panache, and is fraught with self-doubt. (If this is type casting, I’ll kill my director!) By the end of the film, “Pearl” is transformed with the help of a charming podiatrist and a pair of fabulous sparkly shoes. The genre of this story is magical realism, so there’s imagery involved which touches on the fantastic. Throughout the film, “Pearl” is haunted by hallucinations that her feet have become monstrously large—a metaphor for what’s dragging her down, and how difficult she finds it to move through the world. A size 16 “foot double” has been cast to play my feet. As for wardrobe, it’s a low-budget production, so costumer Peggy Hogan has asked me to pull some pieces from my own personal stash.

Viewing my own clothes through the eyes of my character has been an interesting exercise: Going through my closet, it was obvious which pieces “Pearl” would never wear, which ones she’d long to wear but wouldn’t have the nerve to, and which ones she’d settle on, provided they were styled in a low-key way. So I gathered some basics, and chose accessories that I thought might give hints about who “Pearl” is and where she’s coming from. For example, my classic silver grey Hermes scarf could indicate that “Pearl” was well-heeled, and cares about the way she dresses without making any kind of edgy statement. The well-cut black blazer from my own EDIT line is a practical basic that again doesn’t make a fashion forward statement, but would indicate that, by the end of the film, my character was ready to get down to business. And the glam shoes “Pearl” wears for the final scene couldn’t be any of my killer stilettos, but rather a pretty but slightly shy pair of silver Stuart Weitzman pumps with a 3-inch heel (as opposed to the 5 inch heels I normally opt for!) that I got at Ron White’s, during a short-lived practical period in which I toyed with the idea of comfortable cocktail dressing. Great pains were also taken while choosing the reading glasses “Pearl” would wear: My modern funky frames would likely take a back seat to the cheap drugstore variety that had an air of understated accessibility to them.

The morning’s spent going over wardrobe, hair, and make-up details. After costume choices are approved, Peggy Hogan presents some of her own finds, including drab grey Joe Fresh PJ’s for my late night scenes. Then it’s time to meet with hair stylist Tim Howard-and his wife, make-up artist Nancy Day Howard. We decide my trademark bangs have to go. In terms of make-up, we’ll go for a natural, fresh dewy look. But as the story progresses, and “Pearl” gains a greater sense of self-confidence, her make up will become more luminous. The afternoon is spent rehearsing, and every beat of the action, every word in the script is thought through, questioned, and justified. I’m in awe of the attention to detail, and looking forward to our first day of shooting with excitement and trepidation. My co-star, Janet Edmonds, is a former Miss Newfoundland with big, warm personality. But she’s been a legitimate actor for the past couple of decades. I’ll have to prove myself. The pressure’s on.

The night’s spent at the Arts and Culture Centre for hit CBC series Republic of Doyle season three premiere party. I meet all kinds of wonderful people, both from my past, and some Fashion Television fans. Everybody’s surprised to hear I’m in town to shoot a film. Then again, they must have been even more amazed when Russell Crowe came through St. Johns to shoot this episode of Republic of Doyle that’s being screened!

I’ve got a 5:45 am call, it’s 25 degrees below zero with the wind chill factor, and all our scenes for this morning are outdoors. Can you spell FREEZING? I prepare to shiver as I go into hair and make-up. My bangs are swept to the side, and my hair messily done up with a hair clip. After all, “Peal” hastily left home—no time for a neat, upswept ‘do. My usual black-eyeliner is gone, and we go instead for a “no-make-up” look, with pale, natural lips and only a hint of blush. I look in the mirror and someone decidedly different than I’m used to seeing looks back at me. The transformation has begun! We opt for my classic camel Hilary Radley coat, and grey cashmere Tilo scarf, plain black trousers, and some horribly boring brown Dr. Scholl boots that Peggy has purchased. This decidedly unglamourous footwear serves as a metaphor for my character’s sexual repression and low self esteem. By the film’s end, Pearl transforms and goes out into the world in the silver heels. I choose to wear small diamond studs in my ears. Again, my usual silver hoop earrings are simply too “Jeanne” for this demure character.

Patience is key on a film set, with the “hurry up and wait” cliché being played out again and again. In between takes, I go to into a heated car to warm up, but by mid morning, my fingers and toes are first painful, then numb, despite the “Hot Shots” I’ve stuffed into my gloves and boots. I use the adverse weather conditions to help my character feel even more pained and desperate. It’s kind of working. After lunch, chilled to the bone, I do my living room scene, cozied up under a little blanket—it works for the forlorn character and maybe because I’m already a little emotionally spent, I actually well-up with tears during one of my lines. I’ve tapped into “Pearl”, and surprise myself with a performance that my director seems thrilled with.

Our satisfying day on set is capped off with an intimate dinner at Government House. Lt. Governor John Crosbie and his wife Jane have invited me, Ruth Lawrence, and her partner, writer Des Walsh, to dinner, and the splendor of the palatial surroundings, coupled with the gratifying feeling of having done an honest day’s work on an actual film set, puts me in a superb frame of mind: If anyone would have told me 36 years ago, when I first came to St. John’s as a rather starving and unknown artist, that I’d be starring in a Newfoundland movie and dining with dignitaries one day, I never would have believed it.

Disaster strikes! We find out that our husband/wife hair and makeup team won’t be coming to set today. Nancy had a bad fall, and broke her hip and is undergoing emergency surgery. The producers scramble to find fill ins. Our assistant makeup artist is promoted and we manage to find a couple of young local hairstylists willing to help out. Most of my scenes today take place in a “middle of the night” setting, so I get to spend the day wandering around the crowded little house we’re shooting in wearing my comfy, drab Joe Fresh pajama costume. With close to 30 talented people in the crew, I start to feel very friendly very quickly with everyone on set. My foot double is a strapping young man whose size 16 feet have to be pedicured like mine. We go for OPI nail polish in a soft pinky beige shade called Dulce de Leche. The special effect is hilarious, with me actually looking like I’ve grown these monstrous clodhoppers—a metaphor for what’s dragging me down. Several scenes we shoot take place in the bathroom. And it’s a tiny one at that! At one point, I’m down on my hands and knees in that loo with the honking big 35 mm movie camera, and 8 other people, including the director and continuity person, who are positioned in the bathtub. And there are bubbles floating everywhere—another of the magical effects in our story. It’s a crazy, crowded scenario. But hey, we’re making art! I can’t decide whether or not I adore or abhor this process of constant takes, and concentrated action. But one thing’s for certain: This out-of-the-box experience has taken my mind off my sadness, and myself. I can’t wait to see the results when “Two Square Feet” premieres at the St. John’s Int’l Women’s Film Festival in October. Nothing like stepping out of your own character, and throwing yourself into a challenging creative project to cure what ails you.