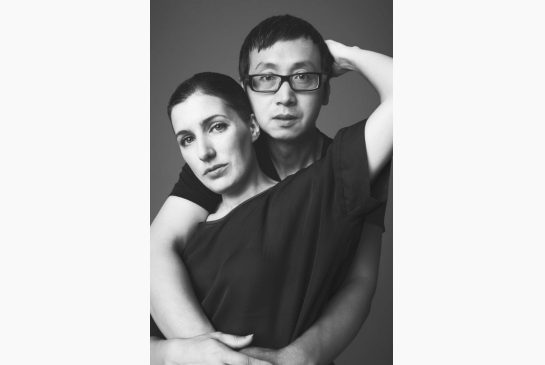 The mood was celebratory in the dressing room at Reitman’s in Montreal’s Place Ville Marie recently, as a spirited cross section of fashionable women gleefully tried on a collection of 10 terrific little dresses by hot Canadian design duo Martin Lim. There was something for everyone in the offering from Danielle Martin and Pao Lim, the husband and wife team who first got tongues wagging last year at Toronto Fashion Week, when they won the Mercedes Benz Start Up Program. Now, in this new collaboration with Reitman’s, Martin and Lim have set out to prove they have commercial appeal. The project, unquestionably a challenging one for a new label, is a bit of an acid test: With Reitman’s tending to all the manufacturing sourcing, distribution, and marketing details, Martin and Lim’s creative vision can fly. If these 10 dresses really do manage to move, the two-year-old label could be catapulted to the forefront of the Canadian design scene. Judging by the elated ladies I met in the dressing room at the launch, Martin and Lim are off to a thrilling start.

The couple met in Quebec City in 1995 and the creative sparks flew: Lim, studying phys ed. at the time, took delight in helping Martin with her fashion projects. They eventually studied design together at Ecole Superieure de Mode de Montreal. I remember meeting Martin in Hong Kong in 1999, when I was a judge at the Smirnoff International Student Design Competition. She took the to Canadian prize. A couple of years later, the pair moved to London to continue their studies at the prestigious Central St. Martin’s, and wound up working for Roland Mouret. They were tempted to stay in London—its fashion community is tight-knit and inspiring—but the cost of living was too high. “Besides, we had a child by that point,” explains Martin. “You need a support system when you’ve got kids.” By 2004, Martin and Lim returned to Montreal to pay their dues and hone their skills. Now the parents of two girls, it was another six years before they launched their own self-financed label. “You have to make concessions and compromises, for sure,” reflects Lim. But their passion saw them through. By their third season, they decided the way to go was to be bold, unique, and daring. “We realized we had to bring something different to the market,” explains Martin. “We couldn’t just play it safe. People would either love it or hate it. ” Their signature look was based on technically proficient construction, and a modern, sophisticated edginess, often accented with athletic details. Their easy-to-wear dresses became their forte’.

“We were looking for someone to follow-up last year’s successful collaboration with Marie St. Pierre,” explains Brigitte Martin, Reitman’s merchandise manager, who says she and her team first became aware of Martin Lim at Toronto Fashion Week last year. Reitman’s was instantly enamoured with the two talented designers. “But we didn’t know that they weren’t as established as we thought until it was too late! Still, we felt confident that the product was there. It was a nice twist of fate that it turned out like this.” The visual appeal of the 10 trend-driven Martin Lim dresses (6 regular sized, 2 petites, and 2 plus sized), coupled with their accessible price points

(around the $85 mark), seemed like a sure fire hit to the retailer. The designers feel the magic is in their tight edit: Each dress had to answer certain needs, from day to night. “Each dress had to stand by itself,” says Lim. “And they all had to sell!”

By the time I flew back from Montreal, I was carrying two “Martin Lim” shopping bags through security. “Hey, is that label any good?” asked a security officer, glancing at the slick bags on the security belt. “I’ve been hearing a lot about it lately,” he said. “Oh yes, it’s very good,” I told him, feeling smug that I’d just had the privilege of partying with the designers behind the label. “You’ll be hearing a lot more about them in the future,” I promised. Meanwhile, I’m looking forward to wearing my flattering Martin Lim dresses this holiday season, always heartened to see talent and tenacity rewarded. But these designers they feel like they still have miles to go. “It’s so weird, because I don’t see it as a success yet,” says Lim. “It’s more like a step-by-step progress. Something else is going to come after this.”