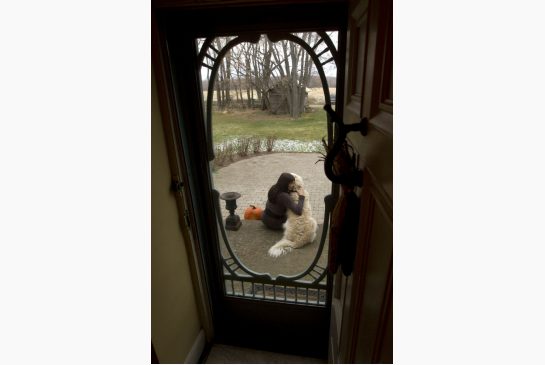 I’m not sure what I’m already missing the most. Lying in bed this morning, in the still of the early dawn, I longed for his snoring—the soft and steady, raspy rhythm of his breathing as he slept, comforting me in the quiet of my house, reminding me I wasn’t alone—would never be alone—as long as I had my Beau beside me. When I got home yesterday, there were no loud barks to greet me, no excited tail wagging or dark dreamy eyes pleading with me for treats, no deliciously musky doggie scent permeating the front hall. Last night, the kids and I cuddled under blankies in the den and watched a corny movie as we ate grilled cheese sandwiches. I so missed having Beau there, begging for a bite, wedging himself between the sofa and the coffee table, determined to get closer to us, reminding us how much we all belonged together.

I’ve done a lot in nearly six decades: waded through seas of sadness and soared through skies of joy, battled onslaughts of doubt and scaled mountains of triumph. It’s been a gut-wrenching and glorious life. But having to let my big precious boy go off to greener pastures last week was one of the most heart-shattering trials I’ve experienced. I’m trying to understand why and how this magnificent creature had the power to touch our lives in such a profound and meaningful way.

While my household is on its fifth beloved cat, Beau was my first dog ever. Besides a tank full of guppies, several mini turtles, and a caged yellow songbird that resided in our kitchen in the late ‘60s, my mother was vehemently against us having more substantial pets. “You get attached to them and then they die,” she reasoned, citing the example of the canary she owned in post-war Poland that tragically died when someone accidently left the gas stove on. “I cried for days,” she told us. The fear of loving and losing a pet was understandable for her—she’d already suffered so much loss in her life. “When you grow up and live in your own house, you can get a dog,” she promised. It was something I looked forward to. But when I finally grew up and got my own house, my husband declared he wasn’t a “dog person”, so I settled for cats instead. When I suddenly found myself a single mom, with two animal-adoring young daughters to raise, in a home that deserved renewed love and laughter, I felt a puppy might be just the thing to lift our beleaguered spirits and make our tiny team feel whole again. So on a sunny weekend afternoon, in the spring of 1999, we made our way to Kyon Kennels in Shelburne, to visit a breeder who specialized in creamy white Golden Retrievers.

From the moment we set eyes on that shy, wee polar bear of a pup, we knew he belonged in our lives. We called him Beau, and to us, he was the most beautiful little guy we’d ever seen. Though a little stubborn (Neighbours laughed when they’d see me trying to drag him down the street for a walk!) and a tad rambunctious, Beau was the sweetest dog imaginable, and the comfort and joy he brought us on every step of our new journey was one of life’s greatest blessings. As he grew, we grew. Having him there to make our home cozier and our adventures more rollicking was a total delight.

A year after we got Beau, we bought Chanteclair, our 123 acre farm in Northumberland—a piece of paradise, chosen largely with our Beau in mind. Watching him wend his way through the cornfields and tirelessly swim in the pond gave me unparalleled joy. But he was equally happy barking at the squirrels in our Rosedale backyard, chasing balls and socializing with his buddies in Craigleith Gardens, or simply licking post-dinner dishes in the dishwasher or cuddling by the fire with our dear cat Moggie. Beau made me take time to smell the roses, and I forever marveled at his boundless energy and tenacity when it came to getting his way. Because he taught me so much about unconditional love, I forgave his odour (Wet Goldens do stink!), his constant shedding (Why someone who adores wearing black would get a white dog that sheds is beyond me!), his begging at the dinner table, loud bark greetings when guests arrived, and even the fact that he once chewed up my favourite pair of mukluks. I pray he forgave me for those times I couldn’t take him for a walk, or was too rushed to rub his belly, or denied him extra treats.

While his puppy-ish behaviour never waned, Beau had slowed down a bit these past few months, and it was getting harder for him to get up. His vet concurred that old age was setting in, and rheumatism and arthritis were big factors. But with new medication, he seemed to be improving these past few weeks. We had a magical, fun-filled Christmas at the house, with Beau sneaking canapés off the coffee table, delighting in turkey scraps and getting his fare share of behind-the-ear scratching and neck rubbing from the assorted guests. Days later, I was on holiday in Spain when my daughter Bekky called with the news that she’d taken Beau to the emergency clinic because his right hind leg had given out and he couldn’t stand up. I spoke to the doctors and consented to him going through a barrage of tests. A couple of days later I was back in Toronto, only to find that the poor guy’s condition had worsened. Although he was alert and didn’t seem to be in pain, he’d become totally lame, and couldn’t walk without assistance. The concerned neurologist suspected the worst, but I took him for an MRI anyway. I had to have all the information so we could do what was best for our dear Beau.

The MRI revealed something terribly wrong with his spine. It was likely Lymphoma. Our options were explained, but none were too realistic for a 13-year-old Golden. It was obvious that the only compassionate thing to do was put Beau to sleep. And it was advised we do that right away. While the euthanasia decision was excruciating, we couldn’t prolong Beau’s suffering. We loved him too much for that. My daughter Joey and I were there, holding and stroking our sweet boy amid the flood of tears, as the doctor injected him, sending him off to the great beyond. Beau took his last breath, and I swear I felt his gorgeous soul step through a threshold of newfound peace and solace.

There’s a great big hole in my life now that begs to be filled. Maybe one day, I’ll get another dog. I can’t imagine what things would be like without one. Beau was emblematic of family and home to me. The sweet, gentle beauty he exuded is indelibly etched within us forever. He made us more loving, compassionate, courageous, and grateful. And our hearts are bigger because of him. He helped knit us more closely together, and taught us about being whole and happy. But as much as I already miss him, I do take comfort in knowing that Beau will always be there as a brilliant touchstone for remembering this most exquisite chapter in our lives.