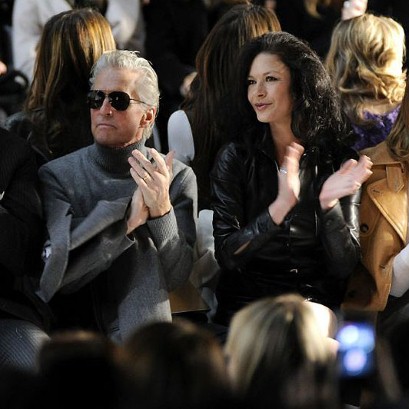 Minutes before show time at the big Lincoln Centre tent, a posse of celebrities, including Bette Midler, Anjelica Huston, Catherine Zeta Jones, Michael Douglas, and Debra Messing, emerge from Michael Kors’ backstage, and the throngs of photographers dutifully snap away. As she’s whisked to her front row seat, Midler sings her friend praises. “These aren’t just clothes that women want to wear,” she points out. “They’re clothes that women need to wear!” At a time when designers are vying for their spot at the top of the fashion heap, Kors’ label is “on fire” according to Holt Renfrew’s president Mark Derbyshire. And you only had to look at this, Kors’ 30th anniversary collection, to see why. Here was modern American luxury at its best, a greatest hits package from the past three decades, with everything from classic grey flannel suits to screen siren statements in silver fox. There were sleek maxi coats, one of the season’s big trends, cashmere knit jumpsuits, and jersey evening gowns, some studded with crystals, all draped to perfection. “His pieces are timeless,” noted Huston, clad in crimson Kors. But what is even more impressive is that this designer never fails to capture the current zeitgeist while always staying true to his signature style. Backstage, Kors talked about conjuring the decadence of the Seventies, the athleticism of the Eighties, the minimalism of the Nineties, and the exuberance of the Aughties. But these were clothes that not only reminded us of where we’ve been, but excited us about where we’re going.

There was definite nod to the past on most of the New York fall catwalks, and some were calling it a “Seventies Hangover” after spring’s zealous salute to that colourful, impassioned decade. Happily, there’s still a lot of optimism in the air, and with U.S. retail sales reaching post-recessionary highs, all-American feel-good messages ran rampant through the collections. Tommy Hilfiger’s upped his luxe ante with a sophisticated preppy Boho collection inspired by “what a ‘70s rock star’s girlfriend would wear.” Citing his own glamourous wife, Dee Ocleppo, as a muse, Tommy sent out a sensual twist on the classics, including silky herringbone prints teamed with leather and suede, pinstripe manstyle suits, a rich burgundy velvet jacket, silk print pajamas, and a navy wool “toggle” cloak.

Diane Von Furstenberg and her co-designer Yvan Mispelaere called their show “American Legends”, and paid tribute to the likes of Diana Vreeland, Millicent Rogers, and Gloria Vanderbilt by presenting a multi-faceted vision filled with bold prints, rich jewel tones, ruffles, fringes and gaucho hats. Barbara Walters was backstage, decked out in DVF blue cashmere. “But this isn’t new,” informed Walters with pride. “This is actually a few seasons old! I’m not much of a shopper,” she confided. Von Furstenberg, who told me that many of the clothes in this collection are the types of things she wore back in the day, was quick to point out that the clothes are meant to be cross generational. “We love all strong women,” she stressed, especially ones with the panache to wear pieces like the fabulous emerald green Mongolian lamb jacket.

There was more colourful Americana at Proenza Schouler. Designers Jack McCollough and Lazaro Hernandez went on a road trip to Santa Fe, and became intrigued with Navajo blankets. Riffing on the exotic imagery, they came up with their own computer prints that surfaced on everything from wrap coats to cocktail frocks. Their experimentation with fabrics—the final frontier for many designers—resulted in interesting plays with jacquard, waxed leather, leather/viscose knits, and rich panne velvet. Patent shearling coats in oxblood and mustard, and elaborate macramé skirts were outstanding. Drop-crotch pants and tall-strappy shoes made for a cool and sexy vibe. “These guys are always pushing forward,” commented front-row guest Chloe Sevigny. “I especially love the T-shirts they do,” said Liv Tyler.

Exoticism was also the operative word for Thakoon. In a gilded salon at The Plaza, the designer addressed various fashion tribes, and went to town juxtaposing sensibilities and patterns in his own inimitable way. In one of his most striking statements, Thakoon took a red-and-blue check Massai pattern, whipped it into a short puffer coat, with pannier sides, and teamed it with a long black taffeta skirt. African-inspired colourful striped wool and paisley pieces and yellow floral batik prints made for great little dresses and an all ‘round joyful mood. Add to that Thakoon’s whimsical shoes and boots, with their pointed toes and chunky heels—some sporting fantastic painted patterns—and you’ve got a new twist on spirited street-style that was nothing short of eye-popping.

Oriental intrigue was also in the air, and on some very disparate runways from Oscar de la Renta to The Blonds, who were inspired by Anna May Wong, the first Chinese American movie star. The Blonds dazzling collection oozed high glamour and gave new meaning to sparkle. But when it came to chic elegance for fall, few could hold a candle to Ralph Lauren. The 71 year-old designer made his first trip to China this past year, and plans to expand his business in that country. He was obviously wowed by what he saw. It all translated into a ‘30s Shanghai Art Deco fantasy that made for the ultimate in American haute luxury. Rich velvets, satins, and intricate beadings and embroideries made for some of the most beautiful clothes of the week with slim silhouettes, masterful tailoring, and slinky evening gowns lending an air of sublime elegance. While there was still a smattering of signature Lauren tweed, the colourful dragon embroideries on jackets and coats just about stole the show.

It was a season of high sheen for many, with Marc Jacobs leading the pack. In a hodge-podge of references to some of his best past collections, the brazen designer created a striking collection chock full of whimsy. Models sporting felt, vinyl, and pony-skin berets with chin-straps (created by milliner Stephen Jones) strutted an eclectic array of outfits with strict, long and lean silhouettes. With garments made of fabrics as disparate as lace and latex, Jacobs’ witty offering played with polka dots (an ode to his very first collection, twenty-odd years ago), knee-length pencil skirts, shiny mid-calf wedge boots, lots of lurex, both real and faux fur, fake crocodile, giant dot pailettes, and plastic cabochon studs. Forget about last season’s dreamy flow: Marc Jacobs is suddenly about severity, with a healthy helping of humour.

Artistry and romance also figure prominently in fashion’s future for fall. Narciso Rodriguez was inspired by a German artist, and a strong graphic sense permeated his collection, which featured lots of colour-blocking and was ultra sleek. There were bold graphic looks in elegant pale ice grey, and interesting fabric mixes. A pink and red paint splotch print on a black silk dress made for edgy, artful drama. And Marchesa designers Georgina Chapman and Keren Craig looked to the tragic character of Miss Havisham from Great Expectations for their wildly romantic inspiration. “I was just watching the David Lean movie one night, and that’s when it struck me,” said Chapman. The resulting gowns and dresses were heart rending in terms of their exquisite workmanship and delicate beauty. “These are dresses to be married and buried in!” quipped the singer and actress Eve. (Suzanne Rogers is bringing this Marchesa collection to Toronto in April for a gala benefit runway presentation.)

Vera Wang’s romantic collection had a definite regal air to it. She was inspired by what she described as “the effortless style of iconic American women who fascinated the English aristocracy in the ‘30s”—women like The Duchess of Windsor Wallis Simpson, Viscountess Thelma Furness, and Lady Emerald Cunard. It was all about understated luxe, with clothes running the gamut from fur-trimmed parkas and wool flannel skinny pants to pleated chiffon gowns.

But some of the most original and breath-taking clothes I witnessed at New York Fashion Week came from a brilliant but beleaguered designer who confided that he doesn’t understand fashion anymore. The accomplished Ralph Rucci, whose costly Chado label is worn by some of the world’s wealthiest and most sartorially savvy women, lamented the fact that crass commercialism was killing high style in America. And the legendary 89-year-old fashion icon Iris Apfel concurred.   “Individuality seems to be over in fashion,” she said. “Besides, it looks like all the clothes being made these days are mostly for 12 year olds!” she complained, looking rather smashing in a vintage Dior red fur coat. Whoopi Goldberg and Fran Liebowitz, also front row at Rucci’s show, agreed that fashion was becoming too homogenous. So what’s fashion’s biggest problem?   “It gets too much attention,” offered Liebowitz. “All the hype is killing it, along with the rest of the culture.” Heady food for thought, indeed. But in the meantime, most designers are mustering all their optimism for fall, digging deep into their creative wells, and trying their utmost to give us all a reason to buy those clothes we’ll not only want to wear, but feel we need to wear.

Assorted hemlines, with an emphasis on longer skirts