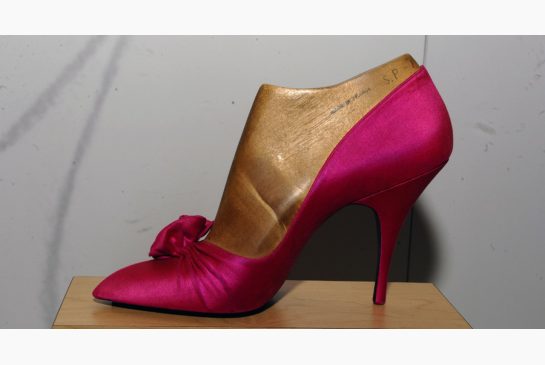 The question of form over function frequently inspires lively dialogue, especially in the shoe department, where comfort can come a distant second to creativity, and we splurge on that “to-die-for” footwear knowing full well it’ll kill our feet. But that’s fashion for you—an enigmatic world fuelled by fantasies and driven by dreams, where the pursuit of beauty keeps us on our toes, even if our journey often results in blisters. “To wear dreams on one’s feet is to begin to give a reality to one’s dreams.” That quote, by Roger Vivier, who died in 1998, and was one of the most celebrated and influential shoe designers of the past century, is posted at the entrance to the glorious Vivier exhibit, which just opened at the Bata Shoe Museum. And for anyone who adores the artistry inherent in great shoe design, the display is a treasure trove of high fashion inspiration.

The Paris-born Vivier, who studied sculpture at L’Ecole des Beaux Arts as a teenager in the early 1920’s, was introduced to shoemaking by a family friend who owned a shoe factory outside of Paris. With hemlines rising, shoes began to grab unprecedented focus, and by the ‘30s, Vivier was well on his way to mastering his newfound craft, even doing private commissions for legendary racy songstress Josephine Baker. In 1937, Vivier opened his own shop, catering to such sophisticated clientele as the Queen Consort Elizabeth Bowes-Lyon, who wore Vivier shoes to the coronation of her husband King George VI. (Vivier also designed Queen Elizabeth’s shoes for her 1953 coronation.) Inspired by a 16th century Venetian chopine, Vivier created the first modern high platform sandal, which Elsa Schiaparelli embraced and included in her 1937 spring collection. Platforms went on to become the definitive fashion shoe of the ‘40s.

During the war years, when there was a limited supply of leather for civilian shoes, and shoe rationing came into effect, Vivier, then living in New York, turned his talents to millinery for a time, learning new skills that would eventually inform his shoe designs. But a couple of years after his return to Paris in 1949, Vivier met Christian Dior, and began designing shoes especially for that design master’s revolutionary creations. The rest is high fashion history, with Vivier going on to refine the stiletto, and producing some of the world’s most breathtaking modern footwear.

“Vivier wanted to transform the foot, to make it like the most beautiful ‘end’ of you,” notes Bruno Frisoni, the Paris-based designer who began designing shoes in 1999, and now heads up design duties at the luxury house of Vivier.  Frisoni, who was in Toronto for the launch of the Bata exhibit and a trunk show at Holt Renfrew, where his current Vivier shoes and bags are sold, sees the Vivier vision as being “very couture”. “It’s like when you see a beautiful dress by Yves St. Laurent, and the draping is like liquid, even though the understructure is very strong,” he explains. “The fabric appears to be floating… It’s exactly the same feeling when you see these Vivier shoes. As structured as they are, there’s an effortless look to them.”

I had the privilege of touring the Vivier exhibit with Frisoni, as we both took it in for the very first time. The designer, who concurs that shoes can make or break an outfit, was amazed to see Vivier’s original drawings of shoe designs. “That’s very rare. And all of them are exquisite in terms of proportion and the sculptural way he considered his designs,” noted Frisoni. The Bata Shoe Museum’s Elizabeth Semmelhack, who curated the exhibit, said the idea for the show started when the museum acquired 63 original Vivier drawings. She realized that many of the drawings were of shoes that were in the archives of New York’s Metropolitan Museum. “I thought it would be great to re-unite the drawings with the shoes, especially at a time when the high heel has become so strong. “I thought, ‘Why not look back at one of the originators?’” she shared.

From the highly ornate silk evening shoes that Vivier created to match Dior’s sumptuous gowns—shoes that gave a nod to the French aristocratic age, yet remained totally modern in terms of their architecture and embellishment—to a pair of plastic python print boots made especially for legendary Vogue editor Diana Vreeland in the ‘60s, the exhibit is a celebration of attitude in footwear. The surprising thing is how ultimately contemporary these designs still look today. “Because they were so innovative,” notes Frisoni. “I mean, he’s among the shoe designers that people still look back to and reference today,” he says.

“I think that one of the things that makes Vivier’s work stand out is that he really was dedicated to a kind of balanced elegance,” says Semmelhack. “The under architecture of all his shoes—even the overly ornate ones—is so perfectly balanced, such a statement in modernity. I think that helped give his designs a kind of tension that continues to make them relevant today.” The public’s love affair with shoes is no surprise to both Frisoni and Semmelhack, who both understand footwear’s transformative powers. “They can even change our bodies,” Semmelhack says, pointing out that a beautifully crafted pair of shoes will make us stand differently. Then there’s the fact that shoes allow us to make our individual fashion statements. “They punctuate an outfit, and give us insight into who women are, or who they’re attempting to be,” says Semmelhack. In the case of those who ever wore Vivier shoes, it was certainly a showing of artistic appreciation. “That’s another reason he stood out so wonderfully,” reflects Semmelhack. “He really was an artist.”
“Roger Vivier: Process to Perfection” runs through ‘til April 7, 2013, at the Bata Shoe Museum.