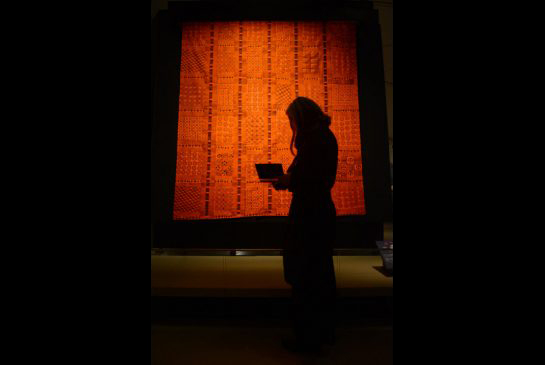 The allure of fashion exhibits has been making big news at museums around the world, so it’s no wonder that our own Royal Ontario Museum wants to get in on the action, in a big way. Last year, the ROM boldly commissioned a magnificent haute couture creation from Dior—a dramatic coat-dress from John Galliano’s final couture collection for the house, presented just weeks before the disgraced designer was fired for making anti-Semitic remarks. The historical significance of this very costly garment—which was inspired by fashion illustrator Rene Gruau’s drawings from the ‘40s and ‘50s and took over 500 hours to make—is of course huge, and the ROM’s savvy senior curator of textiles and costumes, Alexandra Palmer, knew it would make a perfect centerpiece for an exciting exhibition inspired by the notions of “big” ideas, “big” names, and “big” social and cultural significance.

Featuring 40 of the most precious and disparate pieces from the ROM’s collection of nearly 50,000 textiles and costumes, “BIG” is an eclectic and imaginative display at the fourth floor Patricia Harris Gallery aimed at enlightening and entertaining those with a penchant for fresh perspectives on sartorial splendor and a curiosity about magnificent textiles from myriad eras and cultures. “There was a frustration at having these fantastic, big pieces in our collection that the public wouldn’t normally be able to see,” explains Dr. Palmer. “Some of these pieces have never even been out before. So we started playing with the idea of BIG—both physically and conceptually,” she says. From sensational evening gowns by the likes of Alexander McQueen and Tom Ford for YSL, to a modern Indonesian bark dress, a Ghanese funerary wrapper and a centuries old Peruvian macaw feather tunic, to intricately embroidered Chinese lotus slippers and a dazzling18th century Emperor’s robe, the diverse mix of artifacts is dizzying, and the elaborate, eye-popping fabrications are especially inspiring. The Canadian quilts, Chinese rank badges, American fiberglass textile, Indian chintz, and French woodblock print wall hanging on display are also impressive. Fans of both fashion and interior décor are bound to be intrigued by this studied slice of the ROM’s extensive archives.

But beyond the captivating visuals, it’s the way the curators have chosen to tell the compelling stories behind these artifacts that’s especially charming. As well as featuring succinct descriptions, each artifact is accompanied by a series of a few respective “BIG” facts, such as a big event the item was associated with, or the big impact it may have had, or the big message that the piece imparts. It’s a simple but clever technique that relays pertinent information in a direct and playful way, punching up the importance of engaging museum visitors in a manner that has pop appeal. The only factor that’s slightly frustrating is the reality that these treasures have to be displayed in rather low light, due to their fragility, and the fact that they obviously can’t be touched. Still, the ROM’s Patricia Harris Gallery, with its high angular walls, will be an interesting place to visit over the next few months—the site of a kind of crash course in correlating ideas about textiles and fashions throughout the ages that have big global scope and even bigger artistic appeal.