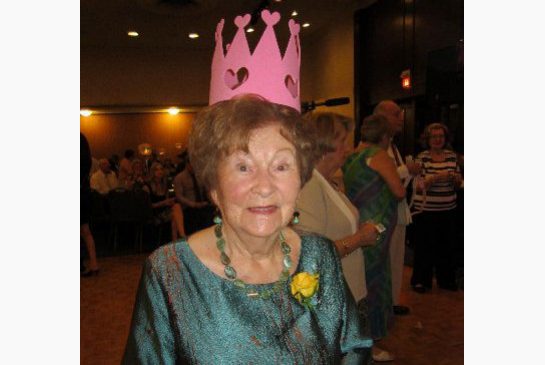 Prom season has wound down for the high school hordes, but for one local group of spirited souls who’ve been to hell and back, the party’s just gearing up. Excitement is mounting for approximately 400 of Toronto’s Holocaust survivors this week, as they plan their wardrobes and practice their dance steps for the 4th annual Senior Prom, to be held at the Sephardic Kehilla Centre, organized by The Yellow Rose Project. It’s all the brainchild of Elise Kayfetz, a passionate 28-year-old gerontologist who understands that looking forward to an event has the power to increase longevity. She also realizes that there’s a precious, dwindling community in our midst whose youth was nipped in the bud: Most survivors never had a chance to indulge in the joys of youth—the socializing, the party dressing, the music, the fun. “What I wanted to do was give them back something they never had, an experience they never even dreamed of having,” explains Kayfetz. And so, with the help of some generous sponsors, Kayfetz went about master-minding a grand soiree to put some spring back into the steps of these inspiring survivors, and allow them to indulge in the simple pleasures that regular “prom-goers” might take for granted. Attendees are treated to transportation, make-up application, a 3-course meal, live entertainment, a prom photo and even corsages. Just as a yellow Star of David was the symbol that would designate Jews during the time of the Nazi regime, yellow roses have become the prom’s symbols for celebration and new beginnings.

“It’s a great night off for these survivors,” says Kayfetz, “a night to meet old friends, and even make new ones.” Most rewarding for Kayfetz was witnessing a special, lasting friendship develop between one elderly survivor and a young adult volunteer who met at one of the proms. And while their amazing survival stories have become such an integral part of who these survivors are, this isn’t meant to be a night rife with tales of woe. Not at all. “I wanted to give them the opportunity to just dance, a night where they don’t have to get up at the podium and tell their story,” Kayfetz says. “It’s so beautiful to see them all dancing—such a serious juxtaposition. When many of these people were 16, they were in hiding, or in concentration camps. Their relatives were shot in front of them. This is a night for them to feel free, a night when hopefully, they won’t have nightmares,” she says.

87-year-old Howard Kleinberg has been a regular at the Senior Prom, and he and his wife Nancy, also a survivor, are very much looking forward to this year’s festivities. “You come to the prom, and you look at yourself and others, you reflect… You’re grateful for being alive,” says Kleinberg. “No one imagined, in our darkest moments, that not only would we live through it all, but would be invited to attend a prom. It makes you feel young, and most importantly, we can show that we’re still functioning after all those horrible years.”

Kayfetz, whose thesis focused on the impact of the Holocaust on survivors, and how to best care for them, understands the torment of the post traumatic stress disorder many still suffer from. But unlike those of us who are the actual children of survivors, and have grown up in the shadow of this horrifying historical episode, Kayfetz’s family wasn’t directly affected. “My grandparents came here before the war,” she told me. “Maybe that’s why I have more clarity to be able to do this. It feels like a moral obligation, but a joyful one. My real job is to celebrate these people. They’ve been through so much to get here, I want to do what I can to make them happy.” 24-year-old Shayla Schipper, chair of sponsorship for the prom, also appreciates the intergenerational aspect of the event, “It’s an evening in which the young volunteers can show gratitude for the strength and courage of an older generation,” she notes.

I have a personal vested interest in this cherished event: Last year, my 92-year-old mother was named Prom Queen. I was overjoyed when her dear caregiver sent me the pictures: It was a delight to see my mom looking so proud and happy, radiant in the new dress she had custom made at Freda’s, amazed that she’d received this coveted honour. My mom was 18 when the war broke out, and her entire family was decimated. But, like Howard Kleinberg, and the others attending this year’s prom, she was compelled to put one foot in front of the other, and just keep going. Then ultimately, one magical night, she found herself in the spotlight, with a big pink crown on her head! It’s all a big lesson in the resilience of the human spirit, I suppose. And though my wonderful mom is simply looking forward to a great night out, seeing old friends, Mr. Kleinburg promises he and his wife will, in his words, “not only dance, but swing!” Like my mom, and all those attending this week’s Senior Prom, Kleinberg is intent on imparting one main message: “Life is a precious commodity,” he reminds us. “You should cherish it.”