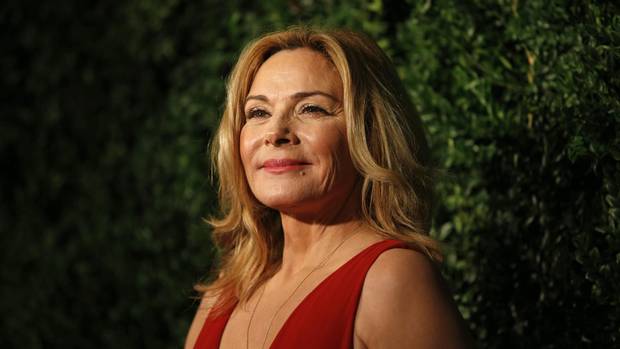 With awareness and appreciation of Canadian designers on the rise—at least here at home—the industry embraces all those who enthusiastically wave our flag on the global stage. After all, the success of our brands depends on it. That’s why British-born, BC-raised Kim Cattrall made such a good host for the recent, third annual Canadian Arts and Fashion Awards. Seen as being particularly style savvy since first capturing fashionistas’ hearts with her spirited, Golden Globe winning role as Sex in the City’s Samantha Jones, Cattrall is currently on a new mission to promote our homegrown designers. For her more recent celebrated series, Sensitive Skin, now in its second season, Cattrall regularly sports Canadian fare, determined to show off what great fashion product this country has to offer. I recently chatted with the 59-year-old producer/actress about her passion for Canadian labels, her personal style philosophy, and why she’s finally feels so incredibly comfortable in her own sensational skin.

JEANNE: It was a great show of support for our fashion industry that you hosted the recent (Canadian Arts and Fashion) CAFA Awards. Why are you so passionate about Canadian fashion?

KIM: It’s been a real education for me in the last three years, since making the first season of Sensitive Skin for HBO Canada, where I play a character who is a former model and lives in Toronto. She would shop in Toronto. And seeing that she was a model, she would be interested in design and designers, and new design and designers in Canada. For me, having been away for quite a while in New York and London and crazy all over the place, it was really an opportunity to get acquainted and educated about who the new designers were. So it became a way of finding one of the details of this character. We wanted to include as many Canadian designers as we could to make it as authentic a show as possible. So I asked our production company to bring on a Canadian stylist who knew a lot of designers. And so, Marie-Eve Tremblay came on board, and she’s in touch with all the young Montreal and Vancouver designers. So she worked with the costume designer for the show and we had a lot of fun, in the sense that no matter what the outfit was, we were going to include as many Canadian designers as possible. Then a lot of my friends in Canada and US would comment on what I was wearing. But it was astounding to me how many people outside of the fashion industry were not as aware of the amazing talent that we have in Canada. So I started to educate not just myself but other people about this great talent source that we have here.
J: Our retail landscape is undergoing such monumental changes. And basically, very few Canadian retail chains remain. We’re worried about how much support our Canadian brands are going to get, especially from the big retailers. It’s almost like you wish that we could do what the Canadian music industry did years back, when the CRTC legislated that radio stations had to play a certain amount of CanCon. It would be interesting if we could do that for fashion, so that retailers would have to carry a certain percentage of Canadian designers…..

K: Yes absolutely! And I do think that Canadians will buy Canadian products. I mean when the Prime Minister’s wife showed up at the White House, she was wearing all Canadian. Good on her! That’s fantastic. But what is the next step? How do we continue that and make these designers have our own star system? We have our own wonderfully talented designers up there, where they are accessible to Canadian buyers because we live in Toronto. Toronto’s a very metropolitan, sophisticated city, but what about people outside of Toronto? We need to get them interested and excited about what’s happening, because there’s a lot to be excited about. You know a lot of people say, ‘Gosh I didn’t know that Sensitive Skin was Canadian. I just thought it was filmed in Canada.’ And I say, ‘No this is a Canadian woman that I’m playing. It’s not an American woman. She’s a Canadian woman and this would be where she would shop.’ So I feel that it’s really time for this extra kind of awareness and encouragement from the business side and from the community side, and nationwide. It’s just really encouraging Canadians more and more to support Canadian product and artists and artistry…

J: What’s sad is that when you were working on the first season of Sensitive Skin, you were wearing Canadian designers Lida Baday and Jeremy Laing—two of the most accomplished, brightest lights on the scene. But since then, they’ve both left the business. What does that say?

K: Well, there is something much deeper going on. And there is a disconnect that we can’t afford anymore.

J: As a woman of a wonderful certain age, would you say that one gets better at style the more comfortable one becomes in their own skin?

K: I think whenever I look at someone who looks very chic, it looks effortless. It’s about not trying too hard, either with an outfit, or a hairstyle, or makeup…. I’ve been in this skin for coming up on sixty years, and I think what I like is just me, hanging out, being real, feeling relaxed, feeling that my clothes are part of what’s representing me, but they aren’t me. I look back at some photographs of when I was younger that friends show me and see some style mistakes and some victories. And I think, ‘Wow that dress is wearing me a little bit there, you know. I’m not wearing the dress.’ Now, what I wore to host the CAFA Awards was a beautiful Pink Tartan suit with a blouse, with a lovely, very simple but chic Ron White pump. And I felt like I was wearing a Canadian designer who was nominated, but I felt very elegant, and very, very much in my own skin.

J: It’s almost like a ‘less is more’ kind of effortless approach.

K: It is. I think when you’re younger, you’re trying on different things. That’s why designers are such an important step to your development. You’re trying to find out who you are, and what looks right, and what feels right, and after a certain age, if you’re lucky to survive this long in the industry and still be working…. well, I feel good about myself, I feel good about where I’ve been, and where I am now. I think that just comes with letting go of the importance of it and really making it more just part of who you are.

J: What’s your feeling about red carpets in general and the way they’re so dissected? People who take chances are so attacked and there’s a lot of entertainment that goes along with the exercise, but sometimes the negativity rules supreme. What’s your take on that?

K: It’s astounding really, the attacking part of ‘How dare you?!’ And you think, ‘What do you mean? I bought a dress!’ Let’s really get real here. You look at the world around us and what’s going on and you think about decimating someone for wearing a hemline? I mean I have more of a sense of humor about it, and actually I really don’t give a s__t!

J: Do you do you find yourself becoming more of a risk-taker the older you get or do you play it safe, now that you’ve hit a kind of groove?

K: I don’t feel one way or the other. I’m just attracted to what speaks to me, just simplicity and elegance and something that I look at and I think, ‘You know, I’ve got four or five hours in that outfit. And with those heels, am I going to be comfortable? Is that going to be great for me and am I going to feel good in that?’ Instead of ‘Oh, I’ll be alright…. I’ll get through it, even though it pinches a bit here or there…’ Now I just I want to feel the way it looks, which is effortless.

J: How do you feel when you look in the mirror or is it different all the time?

K: It depends on how much sleep I’ve had actually! But what I see is a woman and sometimes she looks great and vibrant and alive, and sometimes she looks tired, and I say, ‘Oh I want to take care of her’. I like myself. I want to be good to myself. So I try and surround myself with good cameramen when I’m working and protect what needs protecting. But I like how I look. I like not wearing as much makeup. I like dressing down and merging. In your youth, you want to stand out and you want to be noticed. You want to be seen and heard and I feel a lot of that’s been answered for me. So I think that’s reflecting in the choices that I make, with the people I want to work with, with the material that I’m investing time in. For me, it’s a good point in my life. So when I look in the mirror, what looks back at me is an image that I recognize and am very proud of and feel very connected to. And I love, I love, I love her! I think she’s terrific. I think she tries to do the right thing. And sometimes it doesn’t always work out. But I like what I see. It’s changing and it will continue to change but I’m not going to turn myself into a sausage and I’m going to continue to age gracefully and live my life fully and do things for the heck of it, for fun. I think that what gets left out of the scenario on a busy day is to take the time out and just go for a walk or go see a movie or go for a swim or get on the phone with a family member or someone you’re close to. Just take those times out, just for the heck of it.