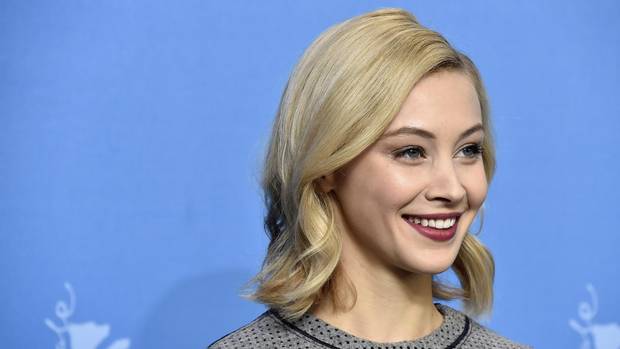 Call it a ground-swell of glamour or some kind of cultural renaissance, but Canada seems to be shining exceptionally brightly these days, and when it comes to style, notable emissaries, like Toronto-born Sarah Gadon, are helping with the cause. The talented 29-year-old actor, who starred in three consecutive David Cronenberg films, and one by the famous director’s son, Brandon, called “Antiviral”, is making her bold mark in the cinematic world and dazzling fans on international red carpets as well. Earlier this year, Gadon appeared at both Sundance and the Berlin Film Festival with a movie she starred in called “Indignation”. Raised by a mother who was a teacher and a psychologist father, Gadon began acting at the age of 10. She studied dance with the National Ballet School and film at University of Toronto, and has since cultivated a burgeoning on-screen career and a reputation as an artist who makes careful choices, both cinematically and sartorially. I spoke with Sarah Gadon about her work, her personal style, and what makes Canada so special.

J: This seems like something that you had your sights set on from when you were a kid. You started acting at quite a young age. A lot of people who were child actors lament the fact that their childhood was spent that way. How did it affect you?

S: It’s really a testament to my parents, because I was active, curious and creative as a child and my parents nurtured that. But I wouldn’t say that I was a professional child actor at all. I was never the breadwinner of my family. It was something that my parents really tried to temper. I never was allowed to miss a lot of school and I did the majority of it on summer vacation. And they insisted that I go to university. They allowed me to indulge in my curiosity of the arts but it really wasn’t until I was an adult that they gave me the blessing to go and be a full-time actor.

J: But obviously you had a sense of drive and discipline from a really young age.

S: I think that when you study the arts, especially from a young age, there’s a sense of discipline that’s instilled in you and I think I got that kind of work ethic and mentality from ballet and from going to arts schools like Claude Watson, where you really learn to respect the arts and you learn what a discipline they are.

J: How does it feel being an actor from this particular country at this particular time, when people are looking at Canada with renewed interest? You’ve certainly cultivated an international career for yourself, but I know you do see yourself as Canadian first and foremost.

S: Absolutely! I think my generation is defining themselves as Canadian artists.It was a very critical moment for me when I began working with David Cronenberg and seeing him choose be this amazing director and creator, basing himself out of Toronto yet being a part from the rest the film industry. I was getting a lot of pressure to leave and go to the States but I never really wanted to. I saw Cronenberg forge his own path and that made me believe that I could do that too. Right now I’m working on this fantastic project called Alias Grace that’s written and being produced by Sarah Polley and directed by Mary Harron, and we’re shooting it all over Ontario we were on a giant tall ship on Lake Ontario and after a day’s work, I jumped in this speed boat we were racing pass the SkyDome and the CN Tower and it was this immaculate view and I had this complete emotional swell in my heart, thinking that I’m so happy I stayed here because I never would be surrounded by so many intelligent, creative women on this project if I had moved!

J: On a personal level I applaud you because I approached my career that way as well. I was very adamant about staying here in Canada.

S: And thank God you did because I would know nothing about fashion if I hadn’t watched FashionTelevision with my parents growing up!

J: Well we must have inspired you to some great heights because you have a wonderful sense of style. I know designers are eager to get their wares on your back, and with TIFF, there’ll be lots of opportunities for you to strut it. How much fun is dressing up for you?

S: Oh it’s fantastic! And we have so many incredible designers here to wear. I’ve been able to foster these nice, natural relationships with designers and it’s really great because I need dresses, man!

J: I would think that the responsibility of having to look that fabulous night after night on the red carpet must be a little unnerving or perhaps even daunting or annoying at times.

S: It can be…. Very. It’s daunting, and exciting, but it can be very frustrating and time-consuming, and sometimes I think, ‘What’s my job here?’ I’m just an actor. I can’t coordinate all of these outfits. But I made good friends with Nicholas Mellamphy, formerly of The Room at Hudson’s Bay, when I was a rising star at TIFF, and he was so supportive in terms of mentoring me helping me navigate designers… and through Hudson’s Bay I’ve have met so many incredible designers in Canada and all over the world. It’s been a really special thing to have because we don’t have a lot of major fashion houses in Canada who have in-house tailoring and the ability to ship clothes all over the world at their expense. So it becomes difficult when you’re doing independent film and you’re going to the Cannes Film Festival and they don’t have a styling budget. It’s a lot easier for younger actors to go to major fashion houses, because they’ll dress them, and they’ll deal the with the tailoring and send stuff to the hotel and the actors don’t have to pay for anything. But a lot of young designers can’t afford to do that. They have to pick and choose (who they dress). It’s tougher to navigate but if you have people like Nicholas or Megan Loach at The Room, who helped me dress this year dress for Sundance and put together a bunch of looks and tailor them and send them over… Well, it’s just been so helpful especially if you don’t have a styling budget.

J: Do you feel the kind of pressure that so many American actresses feel in Hollywood, to look a certain way here in Canada?

S:   I did in the beginning. I’m being very frank here, but generally with young actresses, there’s a lot of pressure to make an impact on their first red carpets or the red carpet that coincides with their films, because that’s the best kind of press they’re are going to get and that can be a massive opportunity. So often there’s a lot of pressure to wear a certain hot designer that will get in the magazines… and it is this kind of machine. In the beginning I always felt a little bit susceptible to that kind of pressure, but through meeting designers and forming these relationships and knowing my own sense of style, I’ve been able to have the confidence to say, ‘You know what? I’m just going to wear a Greta Constantine dress to the Berlin (International) Film Festival because that’s a great label, I like their stuff and I have one.’ And you feel less pressure to be super current or super trendy and just wear what you want to wear and who you like.

J: That to me is really the essence of true style, when you have that confidence to make choices on your own, and not just be dressed by some big stylist.

S: I think you acquire that with maturity because I definitely did not feel that confident in my early twenties. I knew who I was, I knew I was making interesting film choices, I was making art films and I knew that’s what I wanted to do, but I somehow felt less confident in the fashion world because I didn’t feel as if it was necessarily my world. But then through these different relationships (with designers) you learn to stand on your own two feet and voice your own opinion and you find yourself.

J: Yes the fashion world can be intimidating without question and it’s a world that often preys on insecurities…. It’s largely about image.

J: You sound so grounded. It’s obviously upbringing but maybe being from Canada grounds you too. There’s something about the values that we have as Canadians that feeds into the whole notion of what Canadian style is all about. How would you describe Canadian style, beyond the sartorial?

S: I would say that we’re very transient and adaptable and we have this objectivity which I think allows us to stand alone. I know I certainly feel that way in terms of my own career. With Hollywood or the States or the rest of the world, it’s like we’re up here in Canada looking down on it all, and we absorb it all culturally but we have this distance from it. And I think we used to be ashamed of that, but now it’s become this massive tool that’s making us stand apart.

J: You still are adamant about keeping Toronto as home?

J: What’s the hardest part of that? I imagine that you’re just torn because of work….

S: No, it’s more. It’s a boy! It’s always a boy! I would always live here. I live ten minutes from my parents. I travel all the time. I’m always going to have to travel for my job but I just love coming home and I don’t want to recreate my home somewhere else.

J: Well that’s music to my ears because there’ve been too many good people leaving us too soon. It’s wonderful to see that you can still conduct this extraordinary career and still call Canada home. I think that’s encouraging for a lot of young people…

J: I guess it’s always a bit of a compromise, but that’s not necessarily a dirty word.

J: What are you looking forward to the most about the film festival this year?

S: I don’t have a film opening but I will be working throughout the festival. I am really excited to see Xavier Dolan’s film at TIFF. I just did a part in his next movie, which will be his first English-language film, and I had a blast working with him. He is like Bob Fosse and Terrence Malick and everything amazing wrapped into one little beautiful French Canadian package.

J: On a very shallow note, do you have your outfit picked out for that particular party that night?