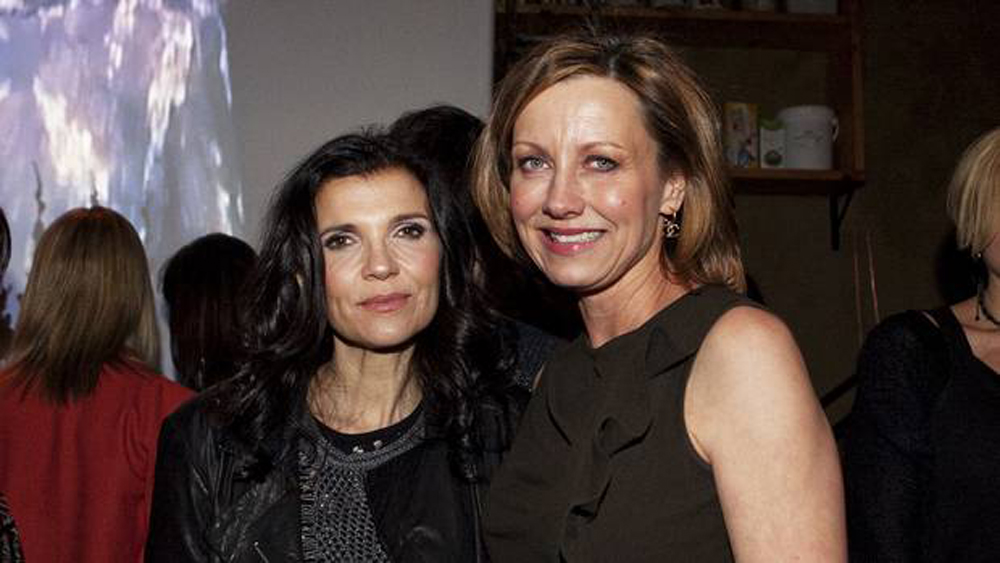 It’s debatable whether fashion can really provide an effective platform for social change. Still, for the past 6 years, Ali Hewson has made it her business to create clothes that will make a difference. And while most fashion brands aim simply to make the wearer look and feel good, the Edun label, which Hewson started with her husband, U2 frontman Bono, was created with a loftier manifesto in mind: to encourage sustainable trade with Africa. The Dublin-born childhood sweethearts (who started dating when Hewson was just 14) are the parents of four children and have long campaigned against poverty. Their initial concept for Edun was completely idealistic. It was going to be one of the world’s first ethically and environmentally conscious fashion brands, all the materials were going to be organic and there would be employment opportunities for locals. But a few years later, after Hewson, Bono, and their partner, designer Rogan Gregory, had invested millions of their own money, Edun was in enormous debt and owed its shareholders a small fortune. In 2009, powerful luxury goods conglomerate LVMH came to the rescue, buying almost 50 per cent of the company. Now, with new designer Sharon Wauchob on board, and an expanded range of styles and fabrications, the company is poised to not only benefit Africa, but hopefully finally turn a profit. I caught up with Hewson at Holt Renfrew in Toronto a couple of weeks before her recent fiftieth birthday to talk about all that she’s been trying to accomplish in the name of love.

Jeanne Beker: Edun has really blossomed. I’m sure there were a lot of naysayers and cynics when you first came out because it was a very original concept.

Ali Hewson: Yeah … I think there was a lot of naivety on our part, too. Which is probably what makes it a slightly different kind of fashion company now. We didn’t tread by the normal rules. But if we had, I think we would’ve been too daunted to do it in the first place.

JB: What do you think you were most naive about?

AH: The difficulty of production. It felt like you were making a table and you got three legs on, and the fourth leg had fallen off, so it was a constant balancing act… just trying to get all the cogs and the wheels to come together.

JB: You have incredible passion for Africa. Tell us how that came together for you.

AH: Well, I think it’s probably when I was small and had images of famine in Ethiopia on the first television that we ever had. I think that was a very striking image, and then when Live Aid happened, we decided we were going to go down to Ethiopia and live in a camp and work in a camp for five weeks. So that was a very formative time. We were young and it was a very formative time to discover this whole continent and Ethiopia, this country that was in dire need. And in the camp that we worked, there was a little boy who was maybe 20 months old. And he used to come over and sit on our knees, and cuddle, and we thought he was an orphan. ‘Til the last day we realized he had parents and they had been staying in the background and pushing him over to us. And when we went to leave, they asked us to take him with us. So I think that really just confounded the whole idea of how tragic this was and how unfair it was that these people were starving and looking for opportunities. You would do anything to save your child. So I think, in a way, that little boy, started off a real fire for both of us.

JB: You and your husband have worked on helping impoverished nations in many different ways. What about fashion as a platform for those kinds of philosophies and ideals?

AH: It’s funny. People see fashion as superficial and shallow, but it’s actually not. As an industry it can really change how things happen and change trade for countries that really need it. Africa had 6 per cent of the world trade in the 1980s, and it dropped to 2 per cent in 2002. Now they’re back up at 3 per cent, which is amazing. That’s just happened in the last couple of years. But 1 per cent of trade is something like $150-billion for them. Whereas in aid, they receive a quarter of that. So trade is really the way forward. They need aid because they have huge problems and they need to be able to get themselves out of those problems, but besides that, they need trade as well. And they want trade as well. They want to feed their own children, they want to build houses, they want to provide health care, education, build roads, they want to be able to do that themselves. And so that’s really what this is about. It’s about just saying: “Okay, we’re going to make a commitment here and we’re going to try and encourage others to do the same thing.”

JB: You’ve obviously managed to strike a balance, walking that tightrope that so many working women aspire to walk. Are there any secrets? What do you tell yourself everyday when you get out of bed?

AH: I suppose it’s just really staying focused on what you have to do. And trying to find some moment in the day that makes you remember that day as a special day. And whether that’s with your kids or whether it’s just slow-down time, take a mental picture everyday. They add up to memories.