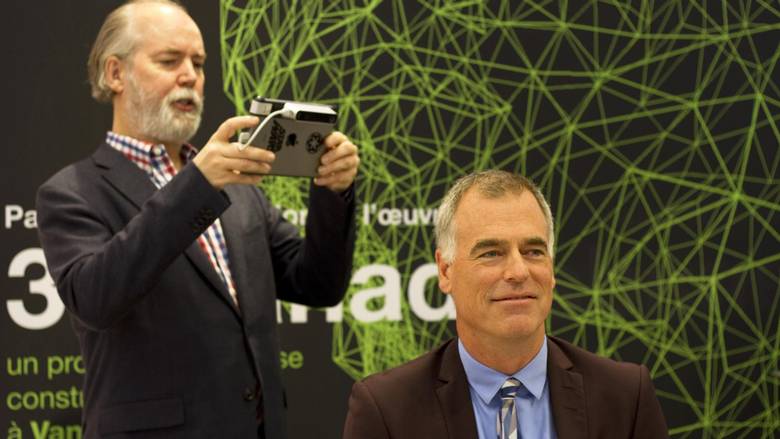 As many ponder retail’s future, venerable Canadian fashion retailer Simons is really pushing the envelope and exploring what our nation looks like now and where we’re going with technology. With stores in seven cities, CEO Peter Simons has been working with Vancouver artist Douglas Coupland and 3D printing expert John Biehler on a mega 3D portraiture project which will culminate in 2019 with a huge sculptural installation at Simons future Yorkdale store in Toronto. Announced last year, 3D Canada is a cross-country effort that began at the Simons store in Quebec City last summer, and is making its way across the country, with a stop in Ottawa this October and one in Alberta next year. Simons is hosting 3D scanning and printing booths in their stores in an effort to immortalize some of their customers, eventually resulting in some 1500 busts that will comprise the pop masterpiece. I spoke with the 54-year-old Douglas Coupland, a multi-media innovator who was named to the Order of Canada for his “examination of the contemporary human condition”, about the exciting state-of-the-art project, what it means to Canadians and how to safeguard ourselves from what the future may hold.

JEANNE: You’re always pushing new boundaries, which I suppose should be the responsibility of every artist, but do you ever scare yourself by all the new trails that you keep on blazing?

DOUGLAS: What I’ve learned is that it gets harder to bring new people into your life as you get older. And I find that unless I keep on doing new projects in different realms, life gets very static very quickly. Basically the happiest year of my life was third year art school and I’ve tried to model my life after that one year. But it never works.

J: Why was that such a happy year for you?

D: I had my own studio in a wood working shop, I did the school newspaper, I was on the student society, and every part of my brain was being used. It was a great experience. You go around once and I want to use all my brain while I still have it.
I want to continue being curious about everything in the world.

J: I can understand why your collaboration with Simons has been inspiring for you. Peter Simons is quite a visionary himself, and has a great sensitivity to art.

D: Simons had commissioned a big sculpture for the store they opened in West Vancouver, not far from where I live, so Peter was in the studio and noticed a 3D printer in the corner and wanted to know how it worked. ‘You scan them and print them out.’ ‘I said. ‘So this is basically the future of portraiture isn’t it?’ he asked. I said, ‘Well yes it is.’ You have to remember that within a year-and-a-half or two years, all the iPhones and androids are going to have built in scanners and pretty good ones at that. So every teenager on Earth is going to have a scanner…. and the price of printers is collapsing. We’re about to enter this new universe that everyone is calling the PHYgital—the physical and digital—and I think Peter just thought, ‘Okay, what is this new universe? What does it look like? Lets get Simons in on it.’ That kind of patron doesn’t come around too often.

J: We’re shopping in such different ways now. How do you feel about modern retail? And what do you think your project might do for the in-store customer experience?

D: I think if you want to succeed in any kind of retail store, it has to have a touch of Christmas morning to it. There has to be that feeling of, ‘Ooh! What will I find at the bottom of the stairs? ‘And I think that’s the sort of magic that retailers really need to stoke the fires with. When we did these scans in the store—we did some publicity beforehand—the first people in the door were from 70 to 80. And they’re like, ‘I don’t know what a scan is but I want one!’ And you get families saying, ‘Wow this is my chance to get entire family portraits done!’ But other people come in and they’re just all very curious. I think for almost every single person we’ve done, this is their first exposure to 3D printing. In 2090, I want people to be saying, ‘I remember the first time I saw a scanner at Simons and it was 2016 and I knew that it was the future.’

J: Much more than just creating beautiful pieces to look at, this is something that really is documenting our time and place in this evolving society. I think that’s what’s so exciting about it. You’ll end up making a kind of socio-political statement as well…

D: Yeah, you know you get people from all aspects of life coming to be scanned. And we say like, ‘Oh it kind of looks like Justin Trudeau’s cabinet!’ Actually we’re going to Ottawa at the end of October and maybe we actually get Justin Trudeau’s cabinet to come in and get scanned. That would be kind of wonderful. But on a very practical level, it’s also about the hair, and fabric, and texture… And what we found is that people with cool hair are lot more fun to scan and print out. So sometimes the line up gets full and then Angela from the company will go out into the mall and she’ll become the hair wrangler and find people with dreads, or turbans…. or ‘come on in, can we scan you because you’ve got cool hair’. The thing is people with cool hair know they have cool hair and when they can say ‘Wow my whole cool hair strategy totally worked out! I’m going to be immortalized!’, they love it and they can feel good about themselves.

J: I imagine that everyone’s going to want in on this. What’s the reaction been like so far?

D: Because of the time it takes to do the scans, we really are limited to about 150 per event. There was one here in Vancouver and this kid was crying we ran out of time and he wasn’t going to be able to do it so we snuck him in the line. You can just see it in their eyes… like, ‘I want to be part of this!’ By the way, we’re trying to find someone with a Mohawk. Not many people have Mohawks anymore.

J: I dare say it would inspire some to go out and get a mohawk just be part of this project and be immortalized by you… With technology developing as quickly as it is, are you worried that this may seem old-fashioned before y the project’s all said and done?

D: I thought of that. Even since we began the project, the software’s gotten better, the machines have gotten better, the filament used to print is more durable and sophisticated… Maybe in twenty years we’ll look back on this and say, ‘Wow! These people had these machines and all they did was make heads and wedding toppers! They didn’t realize that you could do blank with it or whatever. I think it’s going to be absolute the perfect of-the-moment snapshot of Canada at the exact moment in history. I think of the old days…. The Kodak shots from the sixties are turning yellow. The seventies Polaroids are going milky. I think this is just a continuation of democratic photography. When you scan people and they see the back of their head for the first time in their life, that’s when the conversion comes in. It’s astonishing to watch and look in the eyes one person after another, watching their perception of the world change… watching their universe get bigger. That for me is the biggest high of the entire process.

J: You’re really one of the few artists in this country who has managed to remain true to himself and have a commercially viable career. What would you say to other artists who look at you and wish they could get a handle on how to work it?

D: I wouldn’t limit it to just artists– I’d say for everybody– the question I get most is: ‘How do I vaccinate myself against the future?’ Like who knows what they’re going to invent next week, next year, five years from now. How do I not end up being like road kill in all of this? The answer to that is figure it out what it is that you actually enjoy doing –making pancakes, making shoes, chopping tree branches—and that’s what you should be doing. Because it doesn’t matter like what kind of technology they come up with, you’re always going to enjoy what you’re doing with it. Money doesn’t buy you happiness. It buys you freedom to a certain point but after that it’s not necessarily the best thing. Just lock into what it is that you love doing. I think just fascination will keep you safe in the future no matter what the future is.

J: Do you think it’s a good time for this country and its culture?

D: I am of the belief that right now is always the best time to be alive. I think we’re going to look back on right now and see that 2016 was a real high-water mark in Canadian history. We made some difficult choices but we followed through on them. People look at Canada and think ‘Well at least someone’s got it right.’ It’s just a vitality and a sense of freedom in the air that doesn’t exist anywhere else on Earth. And being Canadian now is not about being a version of America or being colonial. It’s like we know who we are and we know what we stand for. And that’s so exciting.