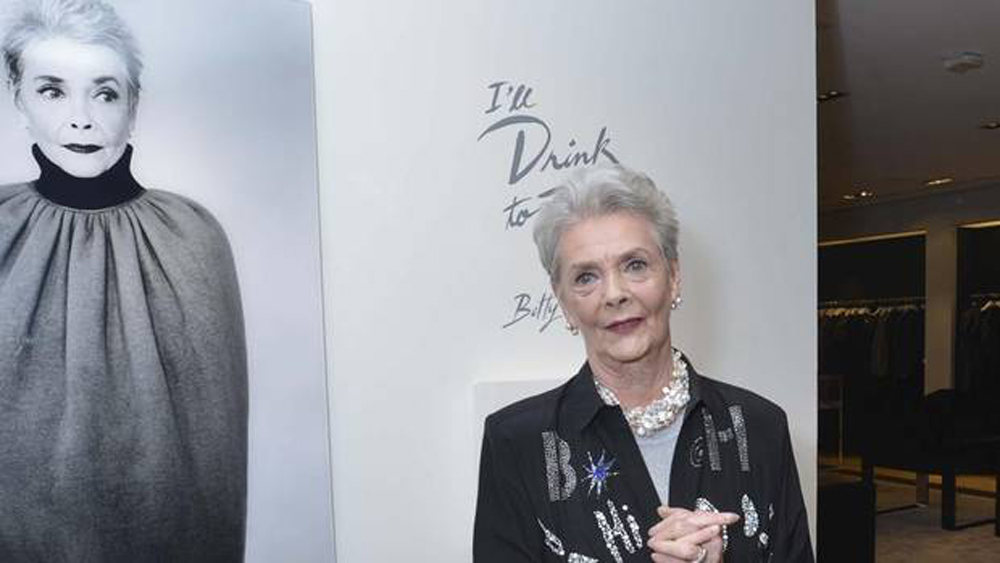 Women speak of retail therapy as a way of lifting themselves out of the doldrums. But the high that shopping provides is often short-lived – unless you’re 86-year-old Betty Halbreich. The legendary personal shopper, who is known for her stellar if unsentimental service at Bergdorf Goodman, New York’s famed luxury department store, has worked in retail for 38 years and claims that the business of helping women shop saved her.

The Chicago native moved to New York at the age of 20 with her suave, philandering husband. They raised two kids, but their marriage had, by the early 1970s, completely unravelled, prompting the devastated Halbreich to have a mental breakdown and even attempt suicide. Adamant about reclaiming her life, Halbreich pursued and landed a job at Bergdorf’s. Bringing her impeccable sense of style, her insights into human nature and a deep sense of compassion with her, she eventually became one of the store’s top-tier sellers.

Now, almost four decades later, Halbreich’s impressive client list boasts luminaries past and present, from Estée Lauder and Joan Rivers to Meryl Streep and Sarah Jessica Parker. She claims that she is honest to a fault and prides herself on being a good listener. Those qualities – plus her no-nonsense approach to dressing and a striking sense of self-confidence (at least on the surface) – have given her eminence in the retail world and garnered her much love and respect.

Halbreich’s first book, Secrets of a Fashion Therapist, was published in 1997. Her second offering, the recently released I’ll Drink to That, is reportedly the inspiration for a forthcoming TV series from Lena Dunham. I sat down with the elegant and feisty Halbreich over tea at Toronto’s Park Hyatt Hotel to talk about honesty, humility and putting your best foot forward both in and out of the dressing room.

How do you explain the fact that you possess this great sense of style?

Possession is a very large word, isn’t it? It’s just something I was born with, luckily. But if you ever want to not love clothes, go to work in a store. I don’t have that huge feeling that I have to have things anymore. But as a young woman, I did have to have … there’s no question about it.

You are good at selling clothes, but you don’t love them?

I’m very self-assured in my old clothes and don’t fret over it. Last night, I had to hurry to a dinner. I had only 15 minutes to get ready, so I had what I travelled in, threw another jacket over it, changed my beads and off I went. I just stood in front of that mirror and said, “This is what I have to do!” That comes with 38 years of practice and knowing that it isn’t terribly important, like it was when I was young.

From the way you describe your job in your book, it seems you’ve got to be a bit of psychologist with the women you help.

I am. I’m definitely a clothes therapist. I coined that myself. Not because I wanted to be; it just evolved that way. My head runs that way. I think that, through adversity, you gain certain strengths; when I took this job so many years ago, I wasn’t as brave as I am today. In fact, I was scared to death. My mother warned me that if I ever took a job (because in my youth I was not allowed to work) to never dress and undress women. Little did I know that I would spend the rest of my life doing it! And it can be belittling if you let it. I tried to build it into something more worthwhile than just the dollar signs and the price tickets.

You really were quite the trailblazer. Now personal shoppers are quite commonplace.

Well, it’s a misnomer. What’s a personal shopper? I really never called myself that. I’m really a clerk – a clerk with an office and a view. But there are people who treat it differently. I’ve always treated it my very own way. I walk to my own drummer; otherwise I wouldn’t have been able to retain any dignity at all, because I’ve been through some horrifying experiences dressing people.

People just being mean to you?

Not being mean to me – they’re probably just mean-spirited, period. So who are they going to take it out on? Me. I had a very well-known woman in Hollywood one day who had to have something immediately and she called me and I had to make room and time for her. And when I got her in the dressing room and we had picked out some clothes, she got undressed and, when stripped down, didn’t have a stitch of clothing on. I was really insulted. I turned on my heel and left the room. No, no, no, you can’t do that! You have to retain dignity in whatever job you have.

One extraordinary woman you worked with was Joan Rivers.

She reinvented herself. That’s the great thing we had in common, I think. I loved Joan. She was gracious and she was giving. She was lonely at times. But she swallowed her life in books. She was a tremendous reader. She also had love affairs that didn’t work out.

Yes, we do. Some take it harder than others.

What about her sense of style?

It kept changing. It evolved. She had a very good man that worked with her. I did not work with her in the last few years, though we stayed friends. We had a lot in common, a lot of similarities. But her stylist dressed her flamboyantly when she started doing Fashion Police. When I first knew her, she dressed very elegantly and beautifully. But then she reinvented herself. She went into spangles and beads and fur and it was a complete reinvention – which I think is superb. I don’t criticize anybody who reinvents themselves. How boring to stay the same way all your life!

In your book, you write that style has less to do with physical beauty than it does with intellect. How does that play out: The smarter someone is, the better sense of style they’ll have?

No, I don’t think so. I think if one becomes too imbued in their own mirror image – how sad! Because when you walk away from that mirror there’s nothing. And that’s what I try so hard to get into these ladies’ heads. Yes, I want you to look good and they want to look good but that’s all extra frosting. It’s how you hold your head that is very important, how you walk into a room.

What about this whole notion of age-appropriate dressing? Many women of a certain age complain clothes sold in the stores aren’t right for older women.

What do you say to them?

They’re crazy. People have taken what they see in magazines, on film and on the red carpet and they envision that’s how they want to look. Well, it can be a huge mistake. These people are just actresses. As for casual dressing, which we all seem to be into, it’s all about layering it on and some of it is good, some of it is laid-back and not as restrictive. It’s how you do it. And looking at your own body is important. Most people can’t look at their own sizing and their own body.

They can’t be honest with themselves?

Well, salespeople don’t help. Salespeople are really remiss sometimes when they want to sell you something. “Oh, you look fine in it! Oh, you look great!” They never turn you around to see the back of you. You get home and you see yourself in your own mirror and you say, “Oh, my God! What was I thinking?”

Trainer? Gym? I’ve never been to one in my life! I’m lucky I go to my dentist. I’m very anti-doctor. I do cook. That is, I love grocery stores. And there isn’t a farm stand I’ve ever passed that I don’t love. And I love nature. But I have a hard time facing a mirror. I dress in the dimmest light.

And what advice do you give women who worry about aging?

Stay away from Botox. I have a very hard time with that. I think dentistry is probably one of the most important things in your life, really. I mean, to have your own teeth is important. But I think some of these [cosmetic surgery] doctors – well, I’ve never been to one. I don’t know that world, nor will I ever. But I think it becomes an obsession. And I think we worry too much about how the friends we lunch and dine with perceive us. But I think people are over-sticking needles in themselves and it bothers me.

The secret, I would think, is being comfortable in your own skin.