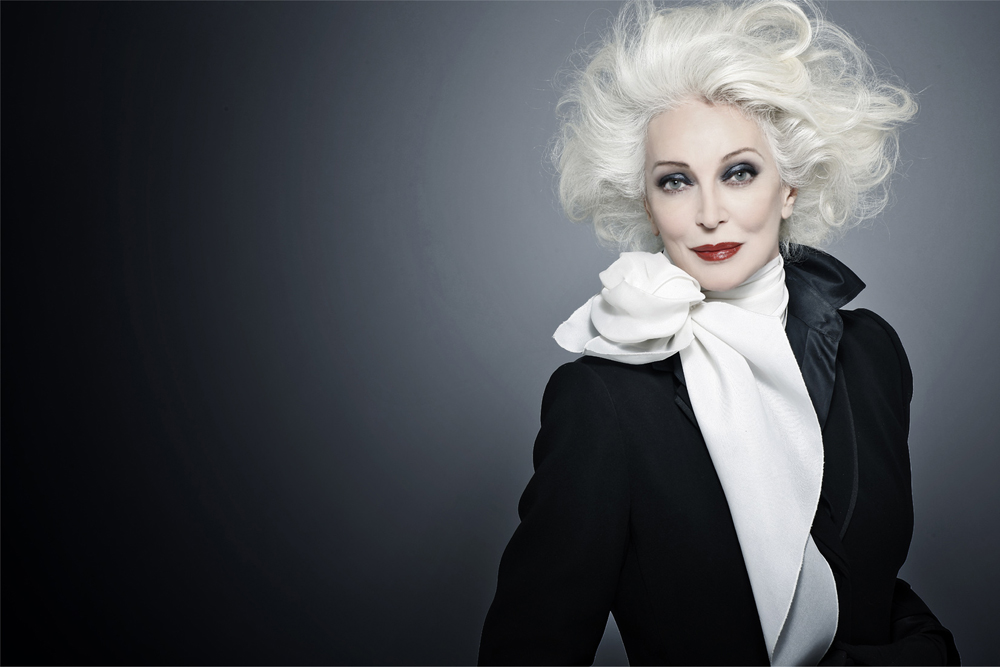 In the trenches of fashion, beauty is traditionally defined more by the height of one’s cheekbones than by the depth of her character. But every once in a while, you come across a creature so breathtakingly exquisite, that you that you know the physical is in perfect synch with the spiritual. Meet Carmen Dell’Orefice. For over six decades now, Carmen has graced the pages of myriad high fashion glossies with her elegant form and haunting, dramatic visage. Often dubbed “the world’s oldest working model”, at 79, Carmen’s secret to survival in the cut-throat fashion world likely has more to do with her positive attitude and life philosophy than her mere gorgeous looks.

Discovered at the age of 13, riding a bus to ballet class, Carmen, the daughter of an Italian musician and a Hungarian dancer, began modeling a year later, in 1946. Living in cold water flat with her mother, she was so poor growing up that she would roller skate to assignments to save on bus fare. In 1947, when she was barely 15, she was featured on the cover of Vogue, and soon found herself posing for some of the 20th century’s most famous photographers, from Hort B. Horst and Cecil Beaton to Irving Penn and Francesco Scavullo. At the height of her career in 1957, she traveled to the Paris collections with the famed Richard Avedon and the legendary editor Diana Vreeland. And the rest is modern fashion history.

Carmen had a daughter with her first husband, divorced him, and subsequently married twice again. In the late eighties, she was engaged to TV talk-show host David Susskind, before his death. Though romantic relationships have never evaded her, she’s certainly had her share of financial woes. Forced to auction off many of her famous old modeling photos at Sotheby’s when she lost most of her money in the stock market, by 1994, she’d invested her life’s savings with the notorious Bernard Madoff, shortly after starting a relationship with Madoff’s best friend, New York real estate mogul Norman F. Levy. Levy died in 2005, and three years later, Carmen discovered she’d been swindled out of all her money. She may have been cheated, but most certainly not defeated: Carmen refuses to be bitter about what could be perceived as a devastating loss, choosing instead to focus on the future and be grateful for all of life’s good things.

When I first interviewed Carmen for Fashion Television at her cozy New York apartment back in 1989, shortly after she’d started making a commercial comeback, I was charmed by her down-to-earth candour and total lack of pretension. Twenty years later, speaking with the legend again, I was even more inspired by her sharp wit, profound wisdom, and captivating self-assuredness. After all, isn’t that precisely what great style is all about?

Jeanne Becker: I remember interviewing you years ago, and you said to me, “I rent a body.”

Carmen Dell’Orefice: Yes, that’s my job. I’m on the inside looking out. And for some reason, decade after decade, in my body and what I look like, enough fit somebody’s need to rent it to advertise their product. I’m not my own physical type. If I were on the outside looking at me, I would say, “That’s a nice looking person,” but that’s it. I’m just so angular looking. I don’t know what to say, I’m glad everyone else looks at me their way.

JB: Some of the greatest photographers of our time have gleaned so much inspiration from you. That seems to be because of the way you are as a person, as a spirit.

CD: I’ve always appreciated what their job is, what they’re trying to do. I’m just part of the picture. I’m not the picture. There’s so much that goes into it, you know? It’s got to be a team effort. Think about family. Think about living. My goal in life is to do better than, “Do no harm.” How do you do some good that really hits the mark? Well, you start one smile at a time; one overt little thing to make another human being know that you notice them, that you feel for them, that you’re happy when they’re happy.

JB: 63 years of modeling now. Do you still learn new things about the art and craft of it on the job?

CD: You bet I keep learning. It’s new photography, it’s digital. There’s a different feel, you know? If you’re in the movies there are different directors, different scriptwriters. Life is a constant exchange and fine-tuning and understanding that no one is a stranger unless you make them a stranger. There’s something to learn, or feel and enjoy, in every encounter, in every day. I certainly feel that I know the difference between a photographer who’s going to make it and a photographer who may not make it, because of what he’s not paying attention to – if I’m working with a new photographer for instance. I have so much experience in that field that I have a pretty good, quick ability to give an opinion.

JB: How do you think notions of glamour have changed over the years? Does glamour mean the same thing today as it did when you first started modeling?

CD: Well it certainly has less to do with style and dignity, and a certain elegance. They tried to move away. The modern expression is, “be outside of the box.” But they better have a look in the box again.

JB: So you think that some of the imagery is just a little too crass and a little too, maybe, in your face?

CD: I think it’s ugly. I don’t think it’s informative, I think it’s misleading to young psyches, young minds. They come into a world with an open door. There is no beauty. It’s an eat dessert first attitude. I may have earned the right to eat dessert first but I’m going to be 80 my next birthday. Fashion is part of a communication. It’s the beginning. We describe part of ourselves by how we look, but you can’t tell a book by its cover. There’s an appropriateness. I think it’s funny when decades and things are just the current thing. All the long, straight hair. Everybody wants to be somebody else, rather than just using those images as a stimulation to look at themselves and redefine and redesign themselves and see who they are.

JB: Yeah, it’s true. I mean, fashion can lead to great self-discovery if it doesn’t stop you and act as a mask.

CD: Yes, and it can be the opposite too. Don’t be a slave to anything, anybody, not even to yourself. I’m in this crazy, wonderful business and because I have never been the particular superstar of any decade. Except now, because I represent having gone through the gauntlet of life, and I’m still standing. I get credit for still standing and being, within reason, not decrepitated.

JB: Talk to me about this whole business of aging. Some people fight it to death and, I mean, people are very upset by it.

CD: Well, they have psychological problems. They have convinced themselves that they might be the first person to live forever. And, as far as I can see, it ain’t happening soon.
JB: But how do you continue to feel as beautiful as you are, when you look in the mirror and things aren’t the same as they were? I think a lot of women fight that battle.

CD: As soon as I wake up, I say hello to the stranger I see in the mirror. The first thing I do is make friends with that person I meet in the morning. I have to do my exercises and I have to do what makes me feel good physically, because if I’m not feeling good physically, my brain falls apart. And I certainly am suffering the ravages of time like everybody else.

JB: Could’ve fooled me. Do you think we place too much importance on sheer physical beauty today?

CD: No, I think what has gotten askew is the definition of physical beauty, that it got so narrow and compartmentalized. Over the centuries, people have always been like monkeys; fascinated with looking at each other, touching each other, feeling each other, grooming each other. It’s part of human nature to communicate. We communicate with body language, with the way we dress, and any way we can. We’re trying to get close to feeling good, to understanding each other.

JB: What about your attitude toward fashion and style as you age? Does it become less important, or perhaps increasingly important what clothes can do for your spirit? Do you still love dressing up? Do you feel like you could wear anything?

CD: I find it very difficult to find things that fit me. When I want to go out and shop I can never find anything. But I don’t throw things out because my body doesn’t change that much. From decade to decade it may go up and down a bit. If I don’t like the way I’m looking, I do my spot exercises and I’m very careful to look at my calories a bit, but not obsessively, thoughtfully. I do exercise every day. It’s not a question of I go to a gym and have somebody tell me how my body feels, that’s ridiculous.

JB: It sounds to me like, not only are you loving your life, but you’re probably loving it even more than ever. You seem to be embracing it so passionately.

CD: And I’m embracing myself by doing that. It’s having faith that my judgment is pretty good for me. And I’m able to help some people along the way. Feeling useful, feeling that you’re truly helping. I’m broadening the discussion, because this is where I am at 79. What can I tell you?

JB: And you’re currently in love?
CD: Of course. And I’m not a “cougar,” it’s somebody who is my age and my kind of person. Working, very successful, very responsible. It’s the possibility of the unending dialogue and the total understanding of where we both have come from. And, I mean, it’s a gift dropped down on me. I say this is really a miracle, because you know how many people I meet? You know how many men are like children and hit on me? The young ones think they’re doing me a big favour and the old ones hope I’ll do them a big favour. You know? I’d known this person, like you know people, acquaintances, for years.
JB: And you’ve rediscovered each other.
CD: Well, we discovered each other differently because circumstances in peoples’ lives change. Believe me, a man of 79 is not an unlived human being, like myself. We had spent years almost elbows apart. It is so interesting what the universe put together.