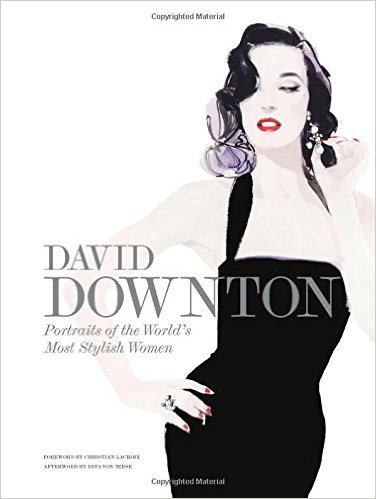 While fashion illustration has taken a backseat to photography for decades, there have been rumblings in recent years that artful drawings are about to make a comeback in style circles. And judging by the recent excitement surrounding the work of David Downton, it looks like there is indeed a renewed interest in illustration. And that’s great news for those bemoaning the fact that true artistry is a dwindling commodity in the fashion world these days. Ironically, British-born Downton attributes some of fashion illustration’s newfound popularity to Instagram, which helps promote hand-drawn imagery by simply putting it out there, stimulating dialogue about how the subject of style is best captured.

A one-time graphic illustrator who began his commercial career in 1984, Downton’s specialty has been covering the Paris couture shows for almost 20 years. His recently published book, “Portraits of the World’s Most Stylish Women”, pays homage to both the art of illustration and the essence of glamour with over 150 of the artist’s drawings of iconic women from the worlds of fashion and film. Among those featured are Catherine Deneuve, Joan Collins, Carmen Del’Orefice, Linda Evangelista, Cate Blanchett, Dita Von Teese and Karlie Kloss, to name a few. I spoke with Downton about how he first discovered fashion, how Instagram has helped revive interest in illustration, and what he’s learned from the world’s most stylish women.

JEANNE: You say that “fashion found you”—that it was all a big happy accident that you wound up in this arena, so rife with stylish women. How did that happen?

DAVID:. Well I had no grounding in fashion at all. But on a whim of a newspaper art director with whom I’d been working, I was asked if I wanted to go and cover the couture shows. I said sure, “Wow…Paris on your money? Sure!” I hadn’t ever seen a fashion show and I went straight from the Eurostar to the Ritz and drew Valentino fittings. It was the beginning of like, “Oh my God! This other world exists!”

J: It’s impressive that you had such a natural inherent sensitivity to the tone of fashion and style.

D: And I can’t explain it. I mean when I was beginning in the 1980s, there were very few fashion artists who were high profile or even working regularly. There was still Antonio Lopez and Tony Viramontes, but they seemed incredibly exotic to me, very romantic and swashbuckling and I never felt that I fitted into that. I’d done graphics at college but I hadn’t studied fashion. I knew about it and I would buy Italian Vogue from time to time, because it’s very inspiring as an object, but I never saw myself in that world. It really hadn’t occurred to me, partly because I would have thought, “How would you make a living in that world?” And then I got this phone call and I went to couture and I thought, “Well that’s fun. I could do more of that!” I was too naïve to be frightened. I didn’t know that it was an extraordinary experience to walk into the Valentino fittings with the pugs and the chandeliers and the smell of lilies.

J: Your first real portrait of a profoundly stylish woman was the model Marie Helvin, who used to be married to photographer David Bailey. She came to an exhibition of your work in 1998, and consented to let you draw her…

D: Yes, I was astonished! I thought, “Did you mean yes?!” Anyway I did the drawing and she saw it and loved it and I give her full credit. She hatched a plan. She said, “Oh you should draw Iman. You should draw Jerry (Hall). You should draw Catherine Deneuve. I said, “Sure!”. And she sent them all a postcard with her drawing on it, saying: ‘This is David and I think you should consider…’ and they all said yes! So I went from knowing no one to ringing on famous people’s doorbells and I loved it. I loved the encounter. And I knew from then that it would be a book. I didn’t know it would take seventeen years. But of course the longer it takes the better it is because you’ve drawn more people, you have more experience. You hopefully get better at what you do.

J: In terms of your evolution as an illustrator, how do you feel that you’ve grown by having been exposed to the fashion world now to this degree?

D: You know, fashion is an easy target and there are enough people in fashion that you really don’t want to spend time with. But I’d say there are more that you do—the best people, the most creative, the most fun, the most glorious looking, the most talented….. Of course it has its share of egomaniacs and disasters, but it only has its share. It doesn’t have more than the movie business, or the arts world. It certainly doesn’t have more than the music business. It’s just that they’re younger, prettier and getting into trouble earlier. But I find the fashion world to be sustaining and exhilarating and I’m very lucky that I don’t live in it. I live in the countryside an hour out of London, so I can get in and get out and have what I regard as the best of it.

J: It’s a joy to be in that world but not necessarily of that world.

D: To be of that world is very hard. It’s a brutal taskmaster. I say I feel grateful to watch it . It’s a magic lantern show. I’m very, very happy to have witnessed it when I did. I saw Galliano’s first show for Dior and McQueen’s first show for Givenchy and I saw Saint Laurent’s last show, and Lacroix’s last show and Mr. Valentino’s last. Even Gianni Versace was still designing when I first began. So I’ve seen these sorts of tumultuous changes within that and to be honest, I don’t very often do ready-to-wear because drawing doesn’t seem to have a place there in quite the same way. That’s much more about commerce, whereas with, couture it’s still about the designers letting their dreams float before you.

J: But I think that’s part of your success in a way. Because what you represent is not about being fast and furious. You manage to instill a kind of romance in the way you see the world. You take the time. It’s not about the quick Instagram shot. Yet it’s interesting to see how much focus you’ve managed to grab via Instagram, with all those wonderful illustrations that you post.

D: Well Instagram is wonderful and I love it. But I don’t particularly love it for my work. I don’t feel it’s the forum for it. I know I put work on there but I’m much more likely to put something on that I love or someone else’s that I love. Still, it has revived interest. And the artists that are coming up through Instagram are heralding in a wonderful new era. You used to have to leave your portfolio with an art director, a fashion editor, and hope for a phone call. Now you can kind of beam it into the palm of their hands. Everybody’s looking at Instagram and it’s wonderful. And I genuinely think that certainly for now, there is a genuine interest and a genuine feeling for drawing.

J: What did the some of the world’s most stylish women teach you about style? Was there some nuggets of wisdom that you could take away from this whole journey of working with?

D: I would say that with every last one, the least interesting thing about them is the way they look. And that’s extraordinary because it’s also the way we know them. For many of them, their opening play is their look, their beauty, their style, how they are. But with each and every one of them, there are so many other levels of style and personality and work and humor and wit. You don’t get to be in that world which is largely, not quite solely, a fashion world—you don’t get to live and be and act in that world and not have intelligence and humor and all the attributes. So it turns out that as stunning as they are, it’s always just the beginning in the story, and that’s what I found fascinating.

J: It seems that it’s largely about is the way these women move through the world. And I’m proud and happy to say that I know a lot of the women that you feature in your book personally. And it’s important to note that there’s also an element of kindness about these women. They’re just as beautiful inside as out.

D: Absolutely. I think I have a very good antenna for this because people always say to me, “Who was difficult?” And hand on heart, the answer is no one. And I wouldn’t say that if I was a photographer. I think photographers can spot a rouge one, they can spot an amateur one, they can spot someone’s that’s not getting it very fast because that’s how they operate. That’s taking care of business. With me, if they agree to the drawing, they kind of trust me to know more than them. And with a photographer, they know as much or more than the photographer. And that’s what’s kind of given me in a funny way this license I suppose. So my portraits are to me the varnished truth. They have to be true, but I’m looking for the high point. I can see the beauty and I want to translate it, but it has to be true. It’s how I see them. I don’t have to try to do anything flattering. I just try to be truthful. But it’s the varnished true. It’s the high truth.