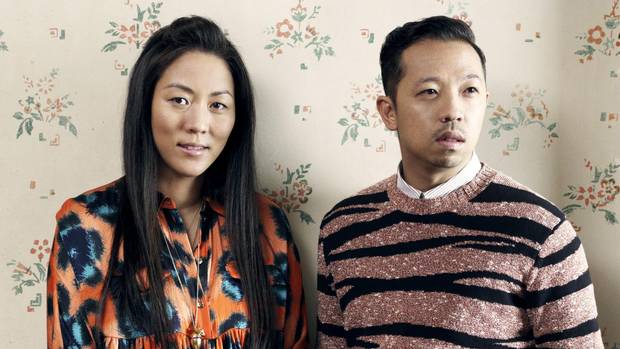 When Japanese born-designer Kenzo Takada first opened his “Jungle Jap” store in Paris in 1970, he likely never envisioned that not only would his brand go down in history as a trail-blazing force in fashion, but that 46 years later, his jungle motif would still be going strong. In an inspired collaboration with Disney, the dyamic duo that’s currently at the creative helm of Kenzo, (Kenzo retired in 1999) have concocted a spirited jungle-themed capsule collection to help celebrate this spring’s release of ‘The Jungle Book’. American retail visionaries Carol Lim and Humberto Leon, also responsible for the highly revered ‘Opening Ceremony’ brand—a retail concept founded in 2002 that turned Americans on to untold hip international brands—took the reins at Kenzo almost five years ago. Their mandate was to inject new life into the sleepy brand that had lost touch with young consumers, and was merely coasting with its fragrances and a customer-base comprised mostly of women in their mid ‘60s. California natives Lim and Leon, best friends since meeting at university in Berkley, were unconventional choices as creative directors for Kenzo: They’d made their reputation as retailers, not designers. But as it turns out, it was match made in modern fashion heaven. The holistic approach that the two take to brand building, their cool collaborations with the art world (for Fall 2014, the duo collaborated with filmmaker David Lynch) and their inherent sensitivity and reverence toward the ground-breaking Kenzo Takada himself, who really shook up Paris’s conservative chic fashion attitude in when he first opened shop in that city, have made Lim, 41, and Leon, 40, complete naturals at brand revitalization, and the Kenzo label has become ultra hip once again. I spoke with Carole Lim from Paris recently about the organic evolution of her partnership with Humberto Leon, the sense of newness they’re bringing to Kenzo, and about fashion values in general.

J: Was it daunting for you, Carol, when you and Humberto were presented with the prospect of helming such a legendary, rich, directional label?

C: It was less daunting but we were really excited, and felt very connected to the brand, knowing about Kenzō Takada and the landscape he entered when he first arrived in Paris. We knew about his historical significance and what the brand accomplished and we felt excited to tell that story again, through our lens. We always think of authenticity and story telling. You can’t deny all the things that he created. And I think a lot of people don’t know that story. So for us, it was a way to sink our teeth 100% into a project where we could not only design, but think about the marketing, the shows, the store experience—everything. And at our other label, Opening Ceremony, we do all of it, so it was a good fit. We try not to waste time thinking, ‘Oh my gosh, is this going to work?’ We just think, ‘Hey we’re going to try it and some people might really love it and there might be people who don’t, but at least we’re moving the story forward!’
J: That holistic approach to design is ultimately modern today. And you two are among the few people on the planet equipped to really look at a brand in that way. So was it just a matter of telling the story a little more clearly and more loudly or did you want to take the image of the brand to a whole other place?

C: We wanted to bring the brand back into the conversation. Think about Kenzo, who not only started the line and the store on Rue Vivienne, but was really an innovator for decades. We wanted to explain the importance of the brand and do it in our way, in a modern way. So it wasn’t about ‘Let’s be nostalgic and go back to the archive and talk about it…’ We were like, ‘What are the new codes and icons that we’ll create for the house…but done in the same spirit and essence that he did when he started the brand…’ We’re obviously making a stark break from where the brand had gone, but that’s because it’s our perspective, and our experience, and our lens. The comment we got from the atelier and a lot of people who had been with the company from the days of Kenzo was, ‘We feel like Kenzō Takada’s spirit is back!’ The clothes look totally different from what he did, so it was less like, ‘It feels like a 1973 Kenzo piece!’ and more like, ‘Wow, here are two Asian Americans who came and really their stamp on it!’ We were excited to create this and give it to Paris through our lens.

C: I think it does, absolutely. I think it’s the way we were raised. I think it’s less like a conscious choice in how we design… but we grew up in the suburbs of California, with immigrant parents (Lim is of Korean descent, and Leone is part Chinese) and there are things that we inherently learned from them. I think that shaped us. But it’s because it’s part of our personal language. It’s less about consciously doing things in a particularly Asian way, but it has informed our way of doing things. Humberto’s mom was a seamstress and she worked in a factory, so Humberto learned early on this idea of how to make garments. And my parents owned a jewelry store, so this idea of buying and selling and merchandising were just part of what we were exposed to.

J: You started Opening Ceremony in 2002, and it was unlike anything that anyone was doing. That was after you and Humberto befriended each other in university. How did you start collaborating, knowing that you both had something to say that would really resonate with people?

C: I guess when we first met we had no idea. We were two friends who had a similar point of view, and were just really curious. We’d always go out together and go see shows. We went to San Francisco, and we’d shop non-stop. We had a similar way of approaching things. Humberto has a longer history in fashion than I do. He worked at the GAP from when he was basically fourteen, through to when he graduated from Berkeley. Then he ended up going to Gap corporate and working at Old Navy. And even though I always worked in retail in the malls growing up, I took a different path. But we always regrouped and had a similar love and fanaticism and nerdiness about bands that we liked, or new things that would open…. And we would go and wait and try to meet the people who started these new things…. that kind of approach. So when we moved to New York we said, in a naive sort of way, ‘I wonder if we could travel and discover brands and shop and figure out how we could do this for an actual living. And that’s how we concepted Opening Ceremony. It was through this love and mutual curiosity of approaching culture. Fashion was one piece of it, but there were so many other things that we were interested in.

J: Many people at the creative helm of design houses and labels are feeling under an inordinate amount of pressure because the business is moving at lightening speed and it’s turned into a very competitive arena. These are tough times in fashion. How do the two of you manage to keep it all in perspective and walk the line?

C: I guess we are very organized. And I think there’s a true passion for what we do. We always use ourselves as the final test to say, ‘Is what we’re creating out there interesting and explainable to someone who has many, many options and is able to purchase many different items?’ As we evolve as people and we have new interests, and we have new things that we want to talk about, we always just think about how do we create that in a garment or in store experience. When we start to lose that interest or curiosity then it’ll be time to move on. It is very fast and there is a constant movement and dialogue and unless you’re truly passionate about it, it’s difficult to maintain. We feel very lucky in terms of being able to be part of this industry because we have a lot of ideas and a lot of things to say. For us, it doesn’t feel like ‘Oh wow here it is again!’. In fact it’s more often, ‘Okay wait… we have too many things we’re talking about! We need to segment and phase things and talk about it, so that each of our ideas has room to breathe.’ So we don’t necessarily feel the momentum in that kind of pace, because it’s the way we just move naturally as people.

C: We did. When we first joined the house, we wrote him a letter saying how honored we were to be at the house that bares his name and that we hoped that he was excited about what we were going to do. And he wrote us back this very kind letter after our first show and said ‘I am excited! Thank you for your letter. I saw the first collection, and I like the energy that you’re bringing back.’ And then we ended up running into him at an event and then ran into him at our favourite Japanese restaurant in Paris…. We’ve now developed a very open and supportive relationship. Whenever he’s in Paris, he comes to our shows. Maybe at some point we would do something together, but we haven’t yet. But we definitely have a supportive relationship with each other.

J: How optimistic are you about the fashion business these days? You’re obviously on a roll but a lot of people are worried that there’s just too much out there. Do you ever get down about the state of the business or do you just keep forging ahead?

C: We’re definitely aware so that’s why we try proposing something that can stand out and really create that excitement for someone to come and purchase to be aware of what’s being created. When we used to go thrift or vintage shopping in our Berkley days in the ‘90s, we were discovering YSL and Kenzo, and we were looking at these amazing brands. Nowadays when you go to Salvation Army you see a lot of fast, disposable clothing. And it’s quite sad because the quality is not there. We hold the same philosophy that we’ve always had in clothing: Humberto and I have never been the types of people to buy something and throw it away. We’re hoarders in that way. We even still have our favourite concert t-shirts and Humberto has never thrown anything out, so he has his first pair of Doc Martens that he wore when he was 10 years old! I think we still kind of feel that way, so in everything that we put out, we want to make sure that there’s value in it, and that doesn’t mean price, but it means that you want to keep it and give it to you know your kid or your nephew or niece. It’s not something you want to throw away. Now people can wear things a few times and throw them away, but that’s not the way we shop. It’s also not what we want to propose out there. We want to propose that even if something is only $25, you really feel like you’re buying something with value to it.

These are the uplifting stories we need: This Brooklyn Landlord Just Canceled Rent for Hundreds of Tenants nyti.ms/2ywSSWW