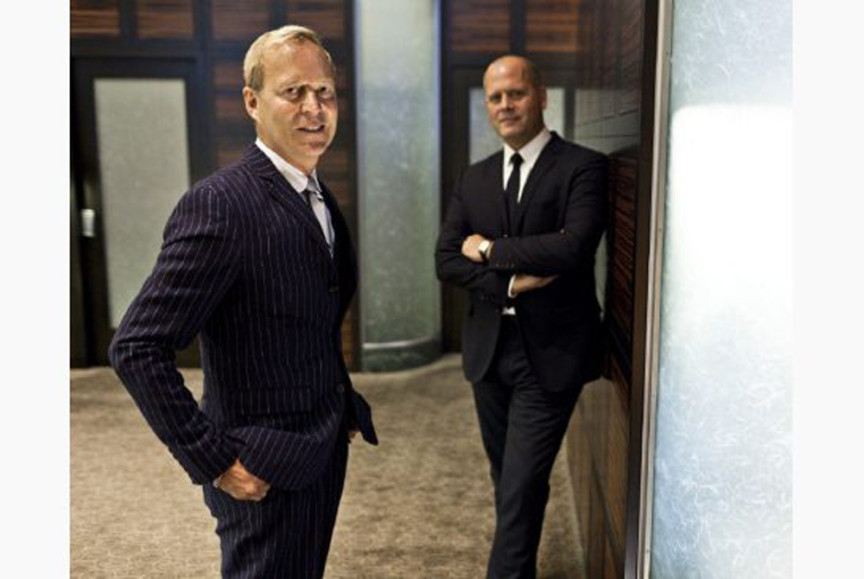 Back in the late ‘90s, I met a pair of New York handbag designers— Richard Lambertson and John Truex—who kindly loaned me a gorgeous little evening bag to wear to the CFDA Awards. The quality of this wee accessory was exquisite, and I strutted it proudly: Richard and John were the first bag designers I’d ever met, and I felt these two guys were onto something. Their aesthetic was sublime—modern, refined, and timeless. As a matter of fact, shortly after I wore their elegant little bag, they gifted me with a fabulous red leather tote, lined in sky blue leather. It was one of the most beautiful, and practical bags I’d ever owned—very plain, but incredibly chic, and it made a bold, classy statement that made me appreciate understated luxury in an exciting new way. The next year, Lambertson and Truex won the coveted CFDA award for best accessory design, and the Lambertson Truex label went on to become a favourite with American fashionistas for its high quality and no nonsense good taste. But as beloved as Lambertson Truex bags were, the company was affected by economic hard times, and in 2009, filed for bankruptcy. Happily, Tiffany and Co., the American jewellery house that was founded in 1837, came to the rescue, acquiring the ailing label, and hiring Richard and John to create a line of high end leather goods to be sold at Tiffany’s boutiques. Tiffany and Co. evidently understood the escalating importance of handbags in our wardrobes, and that fact that many of us now consider our bags to be our ultimate accessories.

Richard Lambertson and John Truex were in Toronto recently, and I cozied up with them at Tiffany’s on Bloor St. to talk about how to shop for the perfect bag, and why great bags tend to make our hearts beat a little faster.

Jeanne: You decided on creating bags right off the bat, at a time when not everyone was hip to the fact that the bag was going to become so iconic in fashion. Why was it bags for you?

Jeanne: And for you Richard?

Richard Lambertson: Four years prior to starting the company, I had been in Italy working for Gucci. Then I came to Bergdorf’s where I was Creative Director and Senior VP. So that was where we started to market ourselves for that kind of high end business.

Jeanne: But even in those days, there were some pretty tough acts to compete with.

Richard: Well right from the very beginning at Bergdorf Goodman, where we had our first boutique, we sat between Fendi, Gucci, and Tod’s…. You name them, we were right in the middle.

John: When we first started our business, I could count on two hands the competitors. Now it’s just unbelievable how many people are in the accessory world. Back then, it was truly accessory design: It was not ‘ready-to-wear’ inspired. Designers were accessory designers. Carlos Falchi for example… all of them were people that specifically just designed accessories, Now it’s very ready-to-wear driven. The competition has changed quite a bit.

John: I love it. I think an idea is an idea. Everyone has a unique idea, and I think there are many people out there for those ideas. Unfortunately, in the world of accessories, as accessory designers, we don’t have that runway platform that a ready-to-wear designer has. So sending out our message is a little bit more difficult.

Jeanne: But right from the get go, your aesthetic was so refined. And for American fashion in general, let alone accessories, this was not something that we saw very much. How did that evolve or was that just the way you always were?

Richard: I think it’s always been our taste. We’ve never been into logos. We entered the market at a time when Dior and Gucci and Prada were splashing their big logos everywhere. And we thought “Who’s going to notice us with a logo? It doesn’t mean anything to us…” So we just thought of quality and craftsmanship. Good clean design was the way to go.

John: It’s very individual. Every woman, and man, has a different purpose with their accessory. Whether it’s going to the office, or going out to dinner. It’s all so individual…

John: And every bag has its own individual personality.

Jeanne: It use to be that just one great bag was enough for a woman. Or one day bag and one evening bag. You really didn’t need a lot. It was pretty much the same for shoes too. But that’s certainly not the case anymore!

John: Accessories now are an expression, they’re a punctuation. I find that women really enjoy changing their handbags and their shoes to go with their outfits. It’s a way for her to express herself….

Richard: I think that’s a logical reason that we’re at Tiffany’s. It’s obviously a jewellery company, but the handbag has become an extension of a woman’s accessory wardrobe. Now women might not spend as much money on clothing as they once did because clothing’s has gotten so expensive. But the investment is in your accessories and your shoes and your bag…

John: And your jewellery.

Jeanne: The whole business of luxury has a lot of people speculating. Even though gloomy times have been predicted ahead, there still seems to be something about the luxury business that remains unscathed. It seems to survive just about anything. Why do you think that is?

Richard: Well Tiffany’s been posting double digit increases in even the last quarter. I think that in these times, people look at Tiffany as a brand they can trust. It’s not going anywhere. It has status. They trust it. People are very loyal to Tiffany. If it’s their jeweller, and they’re offering handbags, they’re going to look at them.

Jeanne: Some people say the whole idea of trends is pretty much over. But when it comes to trends in handbags, what do you say?

John: Well there’s always a trend in colour, or perhaps in the size of a bag, but there are so many women out there with so many different personalities, it can’t be just about one silhouette. We design soft bags, structured bags, small bags, large bags, clutches, totes…. It’s really designing a lot of bags with a lot of different silhouettes for many different women.
Jeanne: So many women are dizzied by the fact that there are so many options around. If we’re going to go bag shopping this season, what types of things would you tell us to keep in mind?

John: Well first, work through the mix. When you’re looking at yourself in the mirror, that’s important. How does the bag feel? What are your needs? Do you change your bag? Do you buy a bag that you wear all season long or all year long? How do you really function? That’s really a good place to start. What I always say when you’re shopping for a new bag, bring the bag that you already carry with you. Put all the things you carry inside your bag into the new bag, and put it on your shoulder. Feel it, let it drape and step back. The choices will be made naturally I think.

Jeanne: And the same goes for guys? Cause obviously men are wearing lots of bags these days too…

John: Guys are very tough. What we’re finding with wallets and briefcases for men is that it’s very personal. I mean a guy with his computer—it’s all about how he moves, how he functions. He’s not so much into the match my shoe, match my belt… but we do see them stepping out and investing in more colour. Our billfolds in plum and even in Tiffany blue are selling so well! I think a guy likes to pull that out of his pocket because you do notice. It’s not that basic black and brown routine any longer.

Richard: And basically a guy buys a wallet and wears it until it falls apart or his wife says, “Honey you have to get rid of that wallet! it’s disgusting! You can’t pull that out one more time!”

John: And then he still holds onto it!
Jeanne: (laughs)
Richard: It’s the same thing with a bag or briefcase. Men usually wear it until the handle falls off. I was always taught that you never wear the same pair of shoes more than twice in a row because they lose their shape from the moisture of your foot. I also think that women should change their bags more often than they probably do, because that way, they’ll maintain their shape. If you just always leave that stuff inside your bag, and you constantly throw your bag on the floor, it’ll just turn to mush.