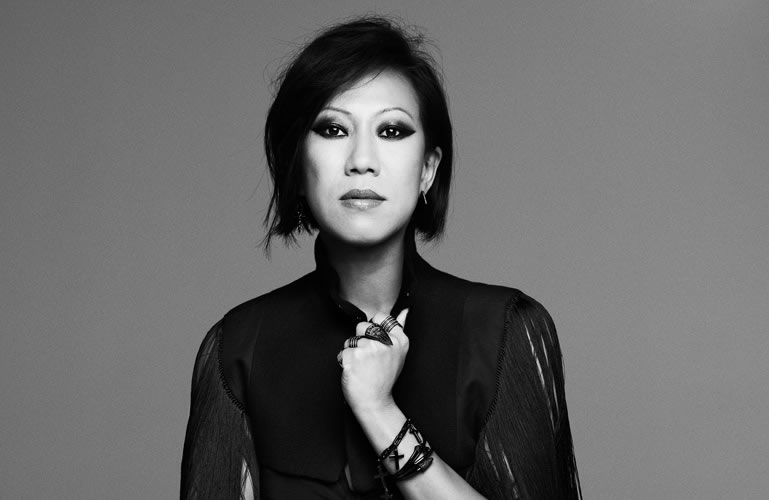 To really make a mark in fashion today—to get heads turning, people talking, and the world’s top celebrities clamouring to sport your wares—a designer has to be unapologetically dynamic with his or her vision. And that’s precisely Lynn Ban’s approach. The Singapore-born, New York–based jewelry designer has become the go-to brand for most of the planet’s biggest pop stars, including Beyonce, Lady Gaga, Madonna, Rhianna and even Justin Bieber. Recently, at the annual Metropolitan Museum’s Costume Institute Ball, modeling sensation Gigi Hadid just about stole, looking fiercely futuristic with a $2,000 dazzling chrome manicure that was brilliantly complimented by a series of sculptural gunmetal rhodium silver Lynn Ban custom armour rings. And Beyonce is decked out in several of Bann’s arresting pieces in her latest videos for the much-hyped ‘Lemonade’. Bann’s bold statement jewelry is now available exclusively in Canada at Toronto’s Archives, in Yorkville. I caught up with the 43-year old designer, the former curator of a vintage couture line for US retailer Barney’s, at a recent dinner party to talk about the phenomenal success of her dramatic accessories and why pop’s strongest personalities can’t seem to get enough of them.

JEANNE BEKER: You’ve been collecting couture and studying it for a long time, but it wasn’t until about 5 years ago that you decided to start designing yourself. What made you want to do your own line?

LYNN BAN: I’ve always been a passionate collector and fashion lover and jewelry had always been a passion for me, but I felt there was something missing for me in the market. I wanted to make something for myself, so I went into it with the attitude that I would make ten pieces for myself and if nobody liked it, then at least I had ten pieces of my own jewelry to wear. But fortunately, Barneys liked it, and Maxfield, and Dover Street Market. And suddenly, a business was born.

JB: You make it look so easy. The roster of people who are wearing your stuff and carrying the torch for you is phenomenal. It seems like the total ‘who’s who’ of the music world are devotees…

LB: I think as much as they’re in love with my vision they’re an inspiration to me. I’ve always loved music and strong confident women, and these pop stars that I’ve been fortunate enough to work with and who wear my jewelry are the embodiment of strong, powerful woman that don’t give a s–t . They’re super talented and not afraid to make a statement.

JB: It’s interesting that you’ve had such a passion for the 80’s and the 90’s. That’s really an era that has just started to really shine again. It’s almost as though you’re ahead of the curve, you falling in love with the ‘80s and ‘90s at a time when people were looking back to the ‘60s and ‘70s. Why the 80’s and ‘90s for you Lynn?

LB: The 80’s and even more so the 90’s were eras that I grew up in, learning about fashion, loving fashion…. And Madonna has always been such an inspiration music wise and fashion-wise. Her imagery and her style are so iconic . It was about really standing out back then, and pushing the envelope. So definitely those eras resonated more because I lived through them.

JB: I guess that explains all your strong statement pieces.

LB: One of my mantras is that I would rather you love it or hate it, rather than be indifferent to it, to have no emotion or reaction to it….like mediocrity. You can’t be like, ‘Oh that’s cute. ’ I want to be like, ‘F–k yeah! That’s awesome!’

JB: But when you’re trying to create a business and build a brand that you really want to resonate on a major scale, can’t that be a little scary? Don’t you want real people to be able to relate to what you’re doing? It’s not just for the rock stars….

LB: Of course. But commercially speaking, I do think my clientele want to make a statement. Not necessarily be vulgar, but saying something… expressing yourself. That’s how fashion has always been and continues to be.

JB: You moved to the US from Singapore when you were four years old. What fed your fantasies growing up?

LB: My mom was a big fashionista from back in the ’70s, and she really had me loving fashion. We would read magazines and when I was a teenager, she brought me to Paris and I got my first Chanel…. So I’ve always have been inspired by fashion.

JB: You have quite an amazing collection of fashion pieces that you really hold dear…. And it’s not commercial purposes.

LB: Not at all! I fortunately kept everything I’ve had since I was sixteen!

JB: Well that would be a huge inspiration to keep yourself in shape too, if you want to keep wearing the old stuff.

JB: So you always realized there was a value in the brilliance of the designs themselves?

LB: Yeah definitely. And everything’s kind of come back around, or you kind of you re-appropriate it. Well-designed things last forever. And that’s something I hope to do with my jewelry. I want something that you look at fifty years from now to still looks modern and relevant.

JB: So do the accessories give you more joy than the clothes themselves?

LB: Well, I’ll give you a scoop: I’m designing a range of handbags… a capsule collection, but certainly something for every moment or mood that you’re in. They’re coming out in September.

JB: You’ve always seen fashion as art. But for you to actually step out and put your vision out there….. was that daunting at all? It’s just a fantasy for most people. They’d never act on it.

LB: It’s most definitely daunting, but going back to the ten pieces of jewelry I made for myself—I just go in with the attitude that if no one else like it, I don’t care. At least I like it!

JB: Some of these huge pop stars that you’re dressing must demand a certain kind of exclusivity. Are they demanding original pieces? I’m sure Beyoncé doesn’t want to see the ring that she wears on some other girl’s finger…

LB: Oh of course, yeah. Well, actually, maybe that’s Rihanna! Beyonce’s pretty chill. Yeah, we’ve definitely cultivated a relationship and I love to do custom stuff for them. They’re all such an inspiration. I listen and dance to their music everyday. They’re just strong, kick-ass sorts of women. They really inspire me.

Take Gaga for example. She wore an ankh I designed on this most recent season of ‘American Horror Story’. And it was inspired by the ankh that was in the opening scene of The Hunger, which starred David Bowie and Catherine Deneuve. Gaga’s character was based on Catherine Deneuve’s. But that was actually something that I did in my first collection back in 2011. Nobody really got it then though. But Gaga’s team called and said, ‘Gaga’s playing this vampire, and she tells us that you have these ankhs that were inspired by The Hunger….’ She knew about them because we’d sent them to her before…. Anyway, then she asked me to do all the jewelry for her character.

JB: Many of your pieces are very high end and very exclusive. But you’re adamant about making your collection accessible to us mere mortals as well, right?

JK: Well, our most popular piece is $300, and it’s silver. So that’s why we made the decision to do the line primarily in silver and diamond. My first collection was big, heavy sculptural cuffs. But I didn’t want to make a $50,000 cuff that would just sit in a case…..

JB: How comfortable do you feel now that you’ve got a brand name and people are coming to you as not only a designer, but as a stylist and almost as a tastemaker—someone who is going to set the tone for who knows how many trends that might come down the pipes?

LB: It’s a dream-come-true. Especially because it’s not only about jewelry but about a whole vision and an esthetic. That’s why I’m excited about going into bags, and who knows what else. It’s just about continuing the vision and the brand… There’s also a lot of pressure in that. But I can always just go back to making things for myself.

JB: But some of these major pop stars must be pretty demanding. You don’t have to name names, but are some of them divas?

JB: Yet you know how to somehow make them happy.

(At this point in the interview, Jett Kaine, Lynn’s husband and business partner chimed in….)

JK: They torture me!

JB: Hey great Lynn… you’ve got a full guy here! All you have to do is be brilliant and come up with the goods….

JK: The hardest part is that you have to say no to 90% of the people who ask you for stuff….

JB: Why? Because you want to keep it exclusive?

LB: Yeah for sure.

JK: You do. You have to keep it that top top level, so that’s the hard part. And that’s gotten us into you know some dramas with people.

LB: But in fashion, it’s always been about exclusivity. But especially now, in this industry where there’s all that loaning going on, it doesn’t make sense for us to collaborate with an artist that doesn’t suit our image or we don’t suit their image, just for the sake of loaning something and getting your name out there. I mean it just doesn’t make sense.

JK: Tell her the rule for the artists we can work with.

LB: That we have to like them! I mean I’m the ultimate fan….

JB: So you really have to like the artist in order to do work for them?

LB: For sure. Definitely.

JB: That’s a pretty good rule of thumb. Ever been disillusioned by them?

JK: Well, it’s hard sometimes. I mean you go out of your way to make people happy, you do a great thing and they’re like, ‘No!’ It crushes you. You think, ‘Wait! You were supposed to wear my stuff! I just spent three days (working on it) and shut my whole showroom down!’

JB: But at the end of the day, Lynn, how does it make you feel when you watch a performer in a video or on stage wearing what you’ve designed?

LB: It’s the ultimate high. It’s a gratification for all your hard work…. Just visualizing it and then seeing it gel with all the elements. It’s a thrill and I feel blessed everyday.