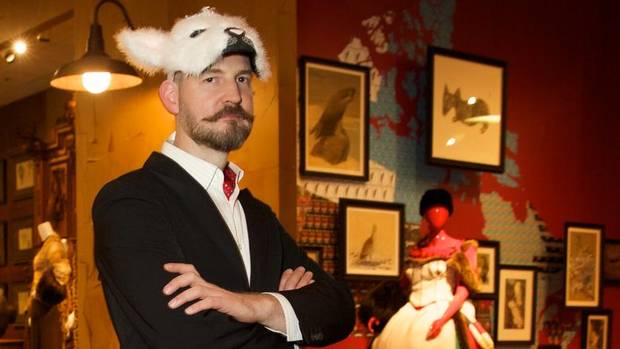 On the Canadian fashion front, where it’s all about ‘survival of the fittest’, designers must be prepared to think outside the conventional business box, and concoct inspiring new ways to not only market their wares, but to keep their names out there and keep themselves creatively stimulated. That is why Calgary’s Paul Hardy remains a shining light, 12 years after his first foray on the runway at Toronto Fashion Week. Despite an onslaught of professional challenges over the years, Hardy has managed to navigate fashion’s stormy seas by staying true to his inner artist. Religiously catering to a healthy handful of devotees in his hometown as well as courting a burgeoning international clientele, the Winnipeg-born designer sells mostly from his super chic studio showroom in a converted old foundry in Calgary’s East Village. And with disparate consulting and designing gigs to his credit for clients that range from the Calgary Stampede to the Alberta Ballet, Hardy’s passions know no bounds. Last year, he was named ‘artist-in-residence’ at Calgary’s Glenbow Museum and conceived and curated an exhilarating exhibit entitled ‘Kaleidoscope Animalia’, all about man’s relationship with animals, rife with exotic artifacts and avant-garde fashion. The show has proved to be a wildly popular, must-see event and has been extended through til September 5th. I spoke with Paul Hardy at his studio to learn more about his work with the Glenbow, his creative drive, and what it is that keeps him in Calgary.

JEANNE: You’ve proved yourself to be a survivor in this business—and seem to get stronger with each new project. Last year you were named artist-in-residence at the Glenbow. Is that how you’d describe yourself first and foremost…an artist?

PAUL: Well I like creative challenges and being able to diversify my creative interests. That keeps things fresh and inspired, and it inspires my primary business of fashion. But designing all the costumes for Sarah McLachlan’s ballet and then this past year working with the museum was a real joy. And then for a year I curated the merchandise of the Calgary Stampede, and we rebranded their image to be more of a hip, urban western mercantile. When I got into doing interiors around the stock market crash of 2008, I thought it would be important to diversify my interests. So this is where I started developing different opportunities with interiors, or consulting creatively on different projects. It helps underwrite my operational expenses.
J: When you say you’re a fashion designer today, it sure is more that just being involved in the sartorial end of things.

P: I think so. Fashion’s a bit like music or film. It’s a governing arena in our social culture, and everybody gets up in the morning and gets dressed. Whether or not they’re good at it is a different story. But it does have an impact regardless of where you live in the world. So I’ve always viewed fashion as a significant platform to even generate awareness about other things… causes… different arts, etcetera.

J: You travel the globe extensively but you always come back home to Calgary as a base. Why is that?

P: I have this motto of not existing at the mercy of your circumstances and so I never wanted my career to determine the existence of my personal life. I’ve always valued the life here in Calgary. The people are really lovely, the quality of life is really great. It almost acts as a bit of a refuge in a way, because when you’re in these more cosmopolitan places like Paris or New York or Toronto or LA, it’s a bit of a rat race. I feel like I get the best of both worlds because I’m able to have this very grounded existence here but then I get to travel five months out of the year and be a part of things. And I realize that may have inhibited the growth of my company, but to me life is really about relationships. I thought l I could go to New York or Paris and try to build up this big fashion house, but there’s a lot of ego in that and eventually it all burns away. I thought it was profound what (Canadian designer) Jeremy Laing did (when he shut down his business). I could totally empathize with what he was feeling. This really is a very strange business isn’t it?

J: Well you’ve always had a unique point of view. Your brand is not only about a lifestyle, but about a consciousness and a raising of consciousness.

P: It’s funny because Women’s Wear Daily wrote me up one time saying that I was a fashion nomad because I would l fly in, show a collection in New York and then disappear for five months and nobody would know where I am. I guess in some regard, I do march to my own drum. I’ve taken very unconventional approaches on how I retail. But I realize no one else is responsible for paying my bills except for me and press certainly doesn’t pay the bills.

J: I’ll never forget the picture you painted in the early days of your career, of working away at your kitchen table all night, finishing collections at the eleventh hour. You were operating as a true artist. So how fitting that you would be the artist-in-residence of this wonderful art museum.

P: I was very flattered and a bit humbled that they had even asked me because there seems to be this continuous debate of whether or not fashion designers are actually artists or not. But I think that they were aware that fashion does have a significant role in society and I think the people at the Glenbow would even say that the public perception of the museum in Alberta was antiquated. They’ve really been trying to change the public’s perspective with new, compelling collections. So they started this residency program a few years ago. Essentially, you get to research whatever you want, and they give you a team of people to help, so you really feel like you’re working in a collaborative way. I have always been very fascinated by taxidermy and man’s relationship with animals. So I proposed that we examine man’s relationship with animals and design, and how that relationship has influenced fashion, art, pop culture, interiors, and lifestyle. I used to do window displays in university, so I curated the exhibition to look like store windows at Bergdorf Goodman. I felt like that would have a commercial appeal. When you walk through the gallery, you feel like you’re window-shopping but it’s all original artifacts.

J: It’s also a fact that fashion exhibitions have done extraordinarily well for museums. Also, the subject matter you’re focusing on here is so universal….

P: Man’s relationship with animals is a common thread through every culture internationally and it transcends every social hierarchy, whether you’re in a tribe wearing skins to fur on royal robes. It also is something that has permeated our culture on a daily basis and in a way we don’t even recognize. We see it in our advertising with cars, or branding on cereal boxes… In primitive times, tribes would kill an animal and eat the heart of the animal thinking they were taking on the attributes of that animal. I think in a contemporary way, it’s like a woman buying a pair of leopard-print shoes and the psychology that’s connected to that, or how she feels when she’s wearing a leopard print bra. It’s a similar state of mind. So there’s an aesthetic component to the whole thing but there’s also kind of a psychological and spiritual thing.

J: I want to know how you keep going back to that creative well and drawing from it so successfully. There must have been some days over the past decade when you just wanted out.

P: There are periods where I feel frustrated but I think that’s common with anybody who’s an artist. They often feel like they’re underrated and wonder what are they doing it for. But ultimately you have to do it for the love of the craft because if it’s for anything else than that, it starts to affect your state of mind. I speak with a lot of fashion students and many of them are jaded because they have this glamorized impression of the business. But it’s hard work, and it’s not glamorous for the most part. A lot of it is very much smoke and mirrors. Perhaps being based in Calgary has allowed me to remove myself from it. I’m able to see the landscape from a much different perspective, which I hope gives me a healthier attitude towards it all.