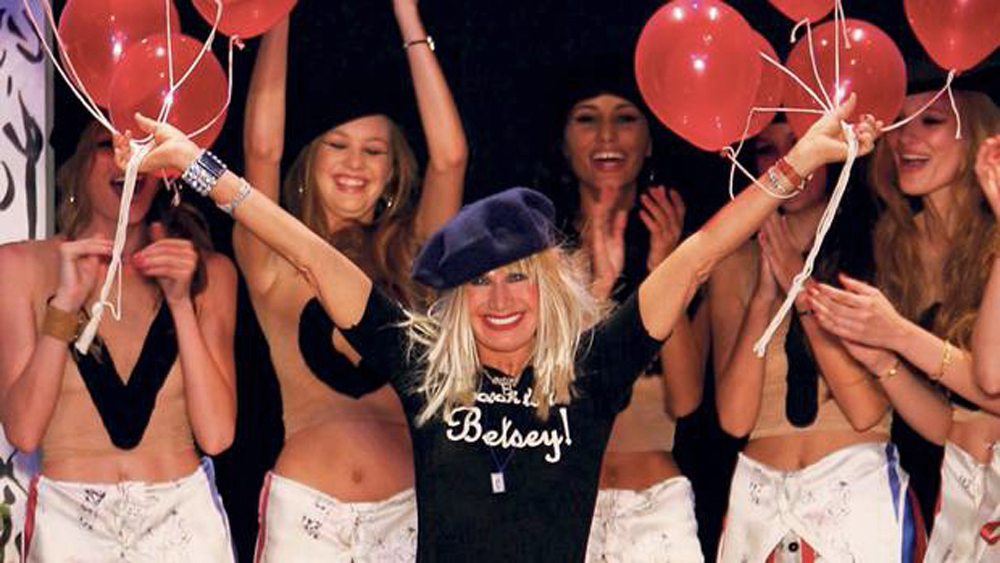 Most designers claim to truly love what they do, but, on the runway, none has ever exhibited the pure, unbridled joy that’s become Betsey Johnson’s trademark.

Still turning cartwheels at the age of 68, the spry and spirited grandmother has been catering to legions of cross-generational fashion fans since the late 1960s with her whimsically feminine, rock-and-roll sensibility. A breast cancer survivor, she is hipness personified.

The Connecticut-born dynamo dove into the fashion arena after winning a chance to guest-edit Mademoiselle magazine and was soon hanging out in New York with the likes of Andy Warhol, Edie Sedgwick and Lou Reed. Johnson went on to start her own fashion label in 1978 with her best friend, former model Chantal Bacon. Last year, the company was sold, amid rumours of business strife, to Steve Madden, which, judging from what went down on the runway during New York Fashion Week recently, was a bold move that made good sense.

Still at the creative helm of her label, Johnson is spreading her wings with a more accessible line, called Pink Patch, a compliment to her mainstay line, Black Tag. She describes Pink Patch as “rock-‘n’-roll-y kind of clothes” that will all be priced under $100. The new uptown/downtown mix is something she is excited about – that, her family and the good old days.

I caught up with the ebullient designer just before she presented her collection.

Jeanne Beker: You’re doing a new line in addition to this other stuff. That is going to fly!

JB: Oh, you’re always reviving something or other!

BJ: I know. Never bored with myself.

JB: At this stage in your life, how much happiness do you glean from your personal life as opposed to your work life? Is it a real balance?

BJ: It all starts with the kiddies. They’re so adorable. My four-year-old granddaughter Layla worked with me all day yesterday. I spent all day and night with her.

JB: So that’s still feeding you in your heart of hearts. But you’d never give this business up?

BJ: I mean, the work thing has never changed for me. I’ve always loved it.

JB: You still are passionate about it?

BJ: Oh, yeah, yeah, yeah! You know, I was brain-dead with a concept for the show. I mean, I can’t show without an idea. Screw the clothes! It’s never about the clothes. It’s about the “why.” And this is a real “why” – to offer a full price range now.

BJ: I don’t think I would tell anyone anything. I just loved making clothes. It was a very exciting time. There was crazy energy flying around. Everyone had an idea and they wanted to do it. And the collaboration was fantastic. You know, we were all hanging out. It was just powerhouse people. It was like the fifties, when the dancers and the writers and the artists all hung out together. There was a real connection, with no jealousy between young and old; [it was]timeless, ageless. Just artists trying to say something.

JB: And you feel it’s different now? It’s not the same?

BJ: Well … I mean … That’s when we did LSD. Not me personally, I’m sorry to say. I was working too hard – you know, one of those eight-o’clock-in-the-morning girls. But we landed on the moon! We had the pill, and LSD. For the fashion business, it was pantyhose and no bras! That shit was huge after the pointy bra-ed, Eisenhower girdle [era] It was Jagger and Bowie and Joplin. For me, that was a special time.

JB: Were you conscious of what an incredible time it was?

BJ: No! I mean, I was just diet-pilling my way along! No drugs – just that one little pill before lunch … because we hardly slept.

JB: Maybe you would go and tell that young Betsey Johnson to savour the moment more.

BJ: Oh, I’d just say: “Try and figure out a thing that you love to do. Just try and find your place, your niche, your fun … whatever it is. Just live it. Live it, love it. I mean, be positive, even on the rottenest days.” You know, the people that really “do it” just love it all so much … the ups and downs don’t matter. And I think, do the kids today have their Max’s Kansas City? Do they have their Chelsea Hotel? I’m sure they do … we’re just too old to know about it! They’re not gonna tell (laughs).

JB: Ours were just better!

BJ: Exactly! And they’re not gonna tell us now what they’re doing. We didn’t exactly give the full rundown to mommy and daddy, you know.

JB: Well, mommies and daddies weren’t as cool as we are now. Look at grannies! Look at how cool you are!

BJ: I mean, watching the Grammy awards … to see Jagger and Dylan and Barbra! We’re a good ol’ bunch, I tell ya. Still kicking ass. And that’s what we were like when we were little.

Jeanne Beker is the host of FashionTelevision. Her new book for young adults, Strutting It: The Grit Behind The Glamour, was recently released. This interview has been edited and condensed.