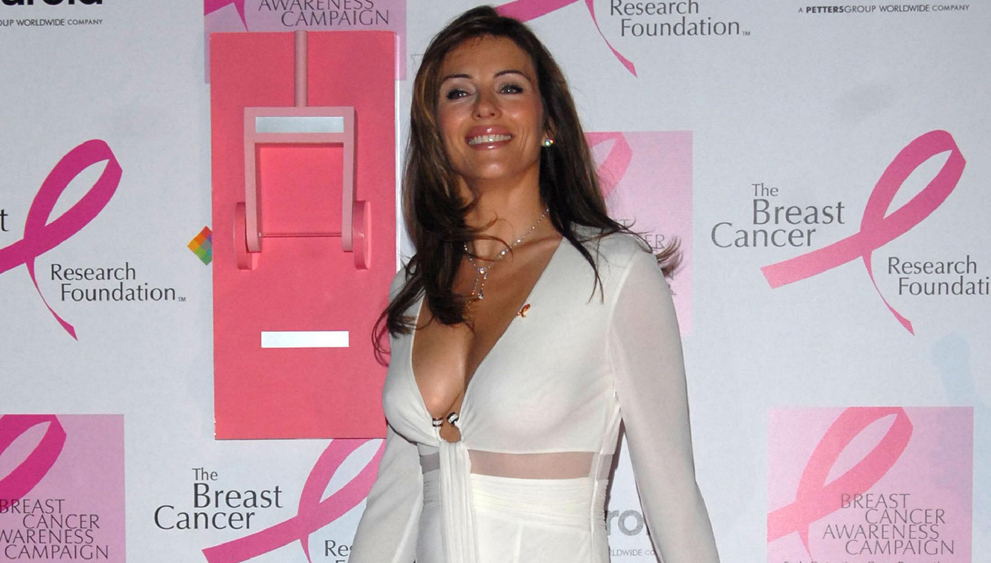 “A real lady must always wear powder on her nose and stockings on her legs!” Estée Lauder declared when I interviewed her back in the eighties. “Oh, God – I fail on both counts today!” Elizabeth Hurley, who has been the global ambassador for Estée Lauder’s Breast Cancer Awareness Campaign for the past 20 years, laughed when I recounted the legendary cosmetics queen’s edict to her recently. “But things do change,” Hurley added. That truism has resonated not only for the Estée Lauder brand, but for the attitude toward breast cancer that the company has worked so hard to alter. Estée’s philanthropic daughter-in-law, the late Evelyn Lauder, spearheaded the BCA campaign in 1992, having raised millions of dollars for the cause. She also helped create the pink-ribbon symbol – a beacon of hope for breast-cancer survivors and a powerful emblem of sisterhood and compassion. The campaign, which has created a new global support community over its two decades, recently launched a digital storytelling mechanism through www.bcacampaign.com; last month, Hurley was in Toronto to spread the word about it. Looking sensational in a tight, powder-pink dress, she spoke with me in the corporate offices of Hudson’s Bay about her unwavering passion for the cause and how far we’ve come in terms of awareness.

What was it that made you say yes to this particular cause, to being so front and centre with it?

Twenty years ago, when I started my contract with the company as a model, Evelyn Lauder came to me and told me she had just started a foundation, then asked if I would help. I had just lost my grandmother to breast cancer. So it was very much in the front of my mind. And what she went on to say was exactly my own experience. She said, “Women all over the world are dying and no one really seems to be talking about it, or doing enough about it, and I want to change that.” And I knew my grandmother had been one of those women, who didn’t talk about it, didn’t tell us about her lump. Hearing Evelyn’s stories, I realized that she wasn’t an isolated case. [Keeping silent] was very prevalent among scared people who found a lump. Nowadays, it’s incredibly rare to find a large tumour in somebody who comes forward for the first time. It happens very rarely, whereas 20 year ago most of the tumours they found, like my grandmother’s, were large. Of course, it’s still not a great scenario today if they find something so large. But it’s very, very rare now, and that really is thanks to the pink-ribbon campaign.

Why do you think people share these kinds of intimate stories?

I think it must be very tough for the people who make the decision to share those stories, but I think that, by doing so, they help so many people who otherwise feel quite isolated and alone. To know that there’s some kind of unity makes a massive difference. I wish that, 20 years ago, we had gone to my grandmother’s chemotherapy sessions with her. I wish we’d known more about it. The whole family didn’t know she had breast cancer because she didn’t want to say the word “breast.”

Why, as an artist, did you think it was so important to extend beyond the work you love so much and do something of this nature?

I think it’s an age-old thing of wanting to give back and, once you realize how lucky you are in some respects, you’re just so desperate to help other people. Those in the public eye can be so phenomenally influential. Like Elizabeth Taylor, speaking about AIDS so publicly so early on. It was a phenomenal thing to do. And when Princess Diana shook hands with AIDS patients without wearing gloves – these were steps that people have taken along the way to stand up for what they believe in. And if, in my very small way, I can do a bit for this cause, it’s a labour of love. I love doing it.