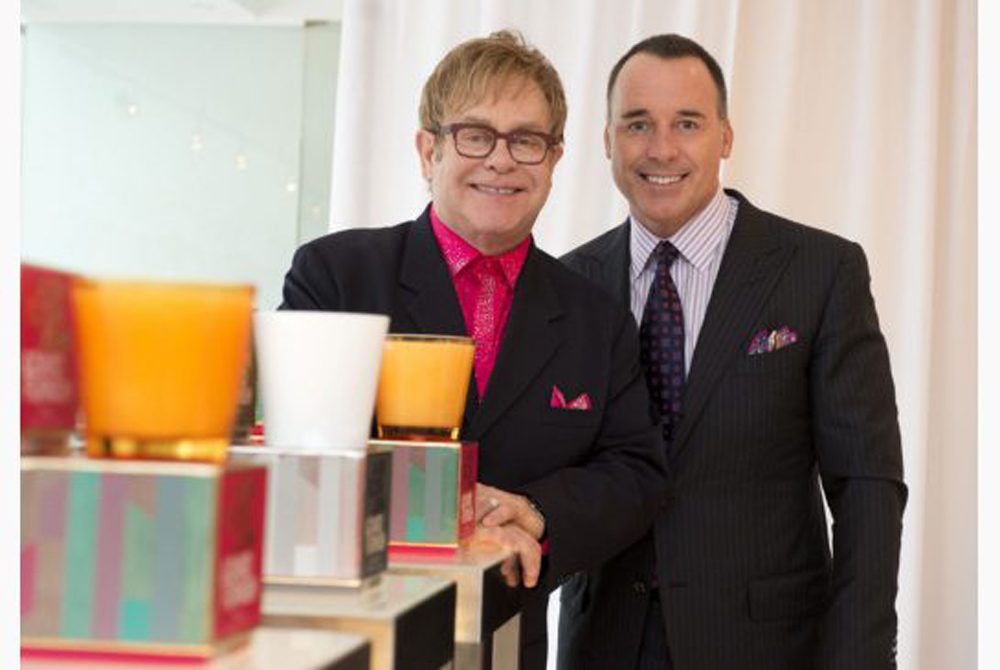 If ever there was a poster boy for passion, Elton John is it. And all those attending tonight’s Fashion Cares gala at the Sony Centre will undoubtedly bear witness to that, as the music legend rocks the stage for his most cherished cause: the battle against AIDS. Elton’s partner, Scarborough native David Furnish, is co-chairing this monumental last edition of Fashion Cares, and the pair are also in town to launch a limited edition candle at Holt Renfrew, all in an effort to raise funds and awareness for the Elton John Aids Foundation.

The fact that Elton is still standing, after a roller-coaster life filled with decadence and drug dependence, is a testament to the power of the human spirit, and how, if inspired, one can transcend anything. In his recent book, “Love is the Cure”, Elton not only shares his personal story of what got him back on track, but documents the social history of that AIDS epidemic that first hit in the early ‘80s, robbing us of some our brightest and best. It was Elton’s friendship with Ryan White, a brave American boy who was a hemophiliac and had contracted HIV from donated blood in 1984, that became the rock star’s inspiration to get his own life back on track and make the AIDS cause his personal mission.

I had the pleasure of chatting with Sir Elton John and David Furnish at Holt Renfrew yesterday, and was moved by their commitment to the cause and their drive and determination to make the world a more compassionate and caring place.

Jeanne Beker: Raising awareness, first and foremost, is what you’re really keen to do. Tell me about Ryan White and how his plight changed your life.

Elton John: Well, when the AIDS epidemic started and I lost so many friends, I was a drug addict and alcoholic, very self absorbed, obviously. This epidemic was raging and I didn’t do anything! I can’t figure out why. It must’ve been because I was so self absorbed in that kind of drug induced lifestyle. One day I read that Ryan White, this little boy from Indiana, was going through terrible problems going to school, and his house was being attacked because of his HIV that he got through a blood transfusion. I was enraged. And I got a hold of his family through my publicist and we became in touch, I helped them move to another place. We became friends, and his whole family and he, himself touched me to such a great deal that they spurred me into changing my life, making me realize how selfish, self-absorbed, and inadequate I was, not doing anything about this terrible disease when it was affecting gay people, and I being a gay man. Ryan was the catalyst for me. And this little boy, who not only turned my life around and saved my life, also saved the life of millions of millions of others because until he became a national figure, AIDS was kind of swept under the carpet. It took a child like Ryan to become a national hero for the government in America to actually do something worth mentioning. That consequently led to the Ryan White Act when he died, which has saved millions of millions of lives. So, that boy, if they beatified the last Pope, then they should beatify this boy. He was a saint, he never complained, he was an inspiration.

Jeanne Beker: And for you, David, growing up in our own backyard, what were your impressions of what was going on in those early years?

David Furnish: Well, in the 80s, I was struggling to come to terms with my sexuality and losing friends from the disease at the same time, which was an utterly terrifying moment and I remember a lot of those people dying very lonely, very sad deaths because we didn’t have the knowledge and we didn’t have the medications that we have today. If you contracted AIDS in the 80s, it was a death sentence and it was a question of prolonging peoples’ lives as long as possible. I remember a lot of heartbreak and a lot of sadness.

Jeanne Beker: For those of us who held the hands of those we’d loved and lost and stared AIDS in the face, it’s a different reality from what we see today. I don’t think kids today understand just what we went through and dealt with.

Elton John: No… Through the horror of dying of AIDS, and the quick, painful death sentence, the Kaposi’s, the dignity stripped away from your whole being …

David Furnish: And the rejection from society …

Jeanne Beker: What an absolutely joy that you’ve come here for Fashion Cares! You’ve been involved before David, but Elton, how do you feel about being part of the event for the first time?

Elton John: It’s so exciting. Fashion, music, film, candles…. everything that I love is going on this weekend! This is a great weekend for Toronto. But it’s a city that’s always cared and I know that because I’ve been here such a lot, and to be here for the last Fashion Cares, and to perform, and to have my friends the Scissor Sisters come, and Sky Ferreira, who we look after, and all the Canadian acts on the bill, it’s a tremendous, tremendous thrill for me.

Jeanne Beker: I don’t know how much a family affair this trip to Toronto is for you. Did you bring your son Zachary with you?

Elton John: We had a big family dinner on Thursday night, which was wonderful. David’s family is very close to my heart, they’re a great family. It’s a big part of Zachary’s future, to be close to his family. It’s very important that he has a family here and a family in England to be close to, and he does.

David Furnish: We want him to have Canadian roots.

Elton John: You know, even before I met David, Canada had a special place in my heart. But now, I’m completely solid. I really feel half Canadian.

TAG: Watch Etalk tomorrow on CTV and E! for more of the Elton John interview. And watch E! and Fashion Television Channel on World Aids Day, Dec. 1st for the Fashion Cares 25 Special.