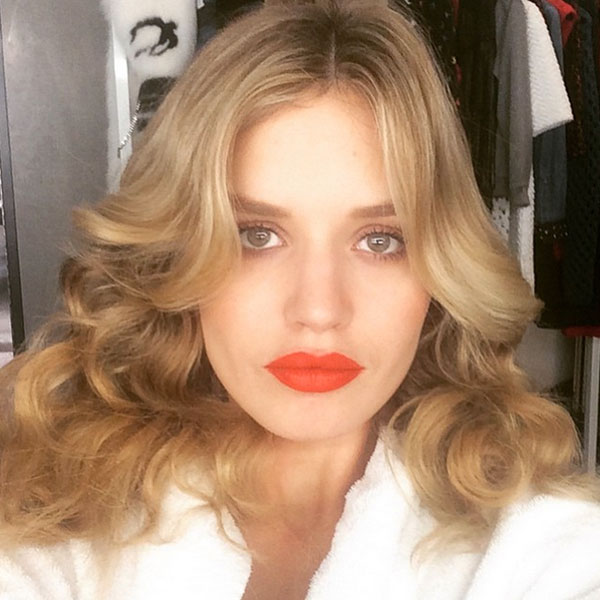 One of the first times I laid eyes on Georgia May Jagger, I should have suspected there’d be a signature motorcycle jacket in her future. Back in the spring of 2011, the younger daughter of Mick Jagger and Jerry Hall delighted the crowds in St. Tropez as she closed the Chanel resort show, sitting on the back of a Harley. The 5’7” pouty-mouthed, gap-toothed model oozed cool as strains of “Let’s Spend the Night Together” wafted through the air. As a newly anointed British “It Girl”—complete with perfect pedigree and arresting good looks—Miss Jagger was well on her way to charming the fashion cognoscenti , wooing us with a classic 70’s kind of cool. Fast forward four years later, and not only is Jagger the new face of iconic British label Mulberry, but she’s also launching her own mini collection for the brand, inspired by ‘70s motorcycle chic. The 23-year-old model-cum-designer has dreamed up a black lambskin leather biker jacket that retails at $1590, and can be customized with your favourite letters or numbers and illustrations of animals associated with the English countryside—the fox, the owl, and the bee. Collaborating with famed French graphic artist Bruno Michaud, who actually does illustrate on helmets and bikes themselves, Jagger is excited to offer such exclusive jackets. After all, she herself is an avid collector of vintage jackets, and holds originality in dress in high esteem. The silk linings of her new Mulberry bike jackets—which are easy to wear because they’re a little longer, with wider sleeves—come in vibrant jewel tones, and she’s also got some small scarves and a leather pouch on a biker chain to complete the look. I chatted with Georgia May Jagger on the phone from London recently to find out more about why she loves fashion, what her famous parents taught her about style, and how she manages to stay grounded.

J: Mulberry is such an authentically British label that came of age at a time when my generation was falling in love with fashion for the first time. What was your first taste of the brand?

GM: I suppose I’ve always been aware of Mulberry more for their suitcases and satchel type bags. When Alexa Chung did her school satchel, I had a purple one and that was my first Mulberry bag. It sort of continued on from there, and really I’ve grown up with them the whole time I’ve been modeling. I’ve always used Mulberry.

J: Well it’s wonderful to be celebrating your British roots in this way. What did your mom, Jerry Hall—a former model herself—teach you first and foremost about the world of fashion?

GM: My mom has a very positive outlook on fashion and always says not to take it too seriously and to make it about fun and things that you’d actually wear and you’d actually want to have a good time in versus it just being about “bought” fashion.

J: Did she always encourage your indulgence of it then? I heard a story about your parents not letting you get into makeup until you were twelve…

J: What would you say the biggest lesson was that you learned from your mom about personal style?

GM: She’s obviously American but she takes on that English eccentric idea. We love all the English designers and always support them. So I suppose her thing is finding designers that you like and continuing to support them, rather than, like I said, buying things that you can invest in, and you’ll wear forever that aren’t just a fad for you. There’s something to wearing things just because they’re fun and colourful and they make you feel good…

J: And what about your dad? What did your dad teach you about personal style?

GM: To be honest it’s not a conversation that we have very often. But obviously he’s got great personal style. My sister has quite a few of his clothes that he used to wear when he was younger, so that’s cool. But me and my dad don’t particularly talk about fashion very often.

J: But obviously he’s taught you a lot by example, just as he’s inspired the rest of the world. I just can’t imagine having a parent that’s that much of an icon. What you learned by mere osmosis must be pretty amazing.

GM: Yeah, he definitely has some serious closets going on, for sure!

J: I’m curious to know what your parents taught you about celebrity and the perils of being in the public eye. It’s unfathomable to most young women your age what it must actually feel like to be so focused upon. Was there ever a point when you questioned your desire to be front and centre?

GM: I never really aimed to be out there front and centre. I’ve grown up in Surrey with quite a normal childhood. I think people assume that because my parents are very famous, that I’d grown up in Hollywood, seeing paparazzi all the time. But actually my childhood was pretty normal. Even doing modeling, I was just going to school normally and just modeling on the weekends until the last two years. It’s kind of more the social media thing that put me out there a bit more. But I just have a normal life back home. I don’t really get bothered by people or photographers or anything like—only when I put myself into that situation. The rest of the time, it’s pretty normal. I still don’t really think of myself as famous I suppose, so it’s not how I think about it.

J: What is it that you personally love about the fashion world today?

GM: I suppose it’s the possibilities, especially that people now can come from any sort of background and as long as they have drive and creativity I think that they can do amazing, creative things. I think you’re seeing more from younger people now because it’s easier to start small lines on the Internet. And for me, it’s just exciting when I’m modeling that I get to see all the clothes that other people don’t get to see first.

J: Do you see this particular collaboration as the first of hopefully many that you would want to do, as getting into the fashion arena as a business becomes more and more appealing to you all the time?

GM: Yeah. I did a collection with Hudson a few years ago, so that was my first taste of designing for a label. And I’ve got a shoe line coming out for Minelli, a French brand that I work with as well that’s coming out Autumn/Winter and we’re designing Spring/Summer so I suppose it is a thing that I’m going into more now because I work all aspects of it. It’s nice for me to be a part of everything rather than just showing up at the end to do the shoot when all the hard work’s over.

J: What about the downside of the fashion business? How tough is it dealing with all the politics of that world?

GM: I don’t really worry too much about the politics to be honest. But I suppose people get very sort of absorbed in that. I just try and think that it’s a job and it’s really fun but it’s not your whole life.

J: People think of you as the epitome of cool—a kind of “it girl” who moves through the world in a wonderful way. What in your mind is emblematic of cool? How would you describe what cool really is in 2015?

GM: God, what a serious question! I think it can be defined in a million different ways. I think what you find cool depends on what your perception of cool is. My version of cool and the things I like to wear is totally different than someone else’s. I think that’s the great thing about it: We’re all different and we’ve all got different ideas. And I think that fashion caters to all those things whether you’re minimalistic or you like a totally different look than that, or something more colourful… So in that way, I don’t know how to define it really.

J: Well you’re a great example of it ,whatever that inexplicable thing is. You also seem to have a strong work ethic that I think is interesting because you’re obviously driven. I mean it would easy enough for you to just sit back and just have fun, but you’re quite determined to work it seems. Where did you get that from?

GM: Probably from my parents. I’ve always had the ‘never give up’ attitude and I started modeling just to make extra pocket money when I was fifteen. I suppose it was quite hard for me to tackle going to school at the same time as modeling, so I suppose that helped me a bit with my multitasking and helped me with my drive because I had to get everything done simultaneously.

I was feeling kinda blue this week…. and then this Tweet popped up. Thank you @CountDownEvents for lifting my spiri… twitter.com/i/web/st…

Sad about the passing of the incomparable Meat Loaf. Interviewing him for The New Music, shortly after “Bat Out of… twitter.com/i/web/st…

Long, sad day… But had the privilege of reminiscing about our beloved Andre Leon Talley on several media platforms.… twitter.com/i/web/st…

My interview with the late, great Andre Leon Talley ⁦@globeandmail⁩ from May 2018… #andreleontalley theglobeandmail.com/…