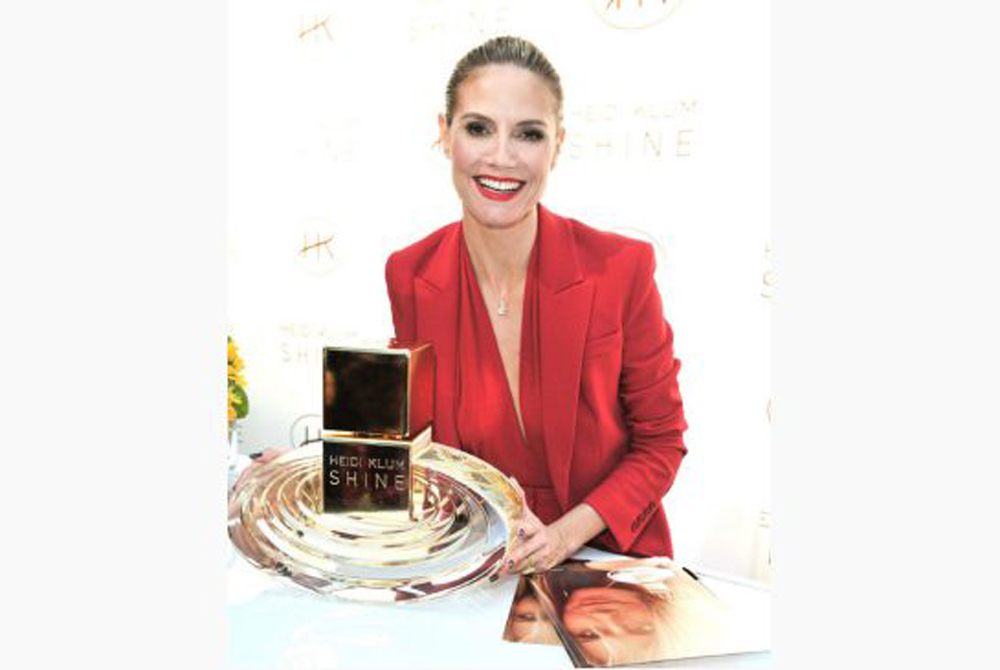 We’re at Yorkville’s swank Hazelton Hotel and Heidi Klum is sad. Looking like Glamazon Barbie in a red tailored pantsuit and blond ponytail, the 38-year-old, 5’9” German beauty had her heart set on shopping Toronto’s mink mile, but it’s been pouring rain all morning and now she’s got a spate of media interviews to finish and a plane to catch. “I mean this hotel is like right on the shopping street and it’s like nosebleeds in the car as I’m driving down the street,” she laments. With all the traveling she does, you’d think she’d have had her fill of shopping. “I never have enough!” she laughs. And as one of the world’s highest earning supermodels, with earnings last year estimated at 20 million dollars, she’s got plenty to spend. Flea markets, really interesting little boutiques, department stores… I like to shop it all,” she explains. “That’s how I am with magazines too. I fly through them… I like to see what’s out there. I like to see what people are doing. ” Klum’s natural curiosity and thirst for the visually stimulating is all part of her creative drive—an ambitious spirit that’s taken her from model to Victoria Secret icon to producer of such shows as Project Runway and Germany’s Top Model, to author (Heidi Klum’s Book of Knowledge: Eight Rules of Model Behaviour) to the face of brands like Diet Coke and VW, to launching a jewellery collection and clothing lines with Jordache and New Balance, as well as maternity lines. Married to R +B star Seal, she gave birth to her fourth child in 2009. Evidently, Klum is adamant about leading a balanced life and having it all. And she’s certainly a poster girl for that notion. Now, she’s even got her own fragrance—a spicy, citrus scent called Shine. It could be viewed as the cherry on top of her already sumptuous career. But after conversing with Klum, I get the feeling she’s only just begun.

Jeanne: Why is it that you have decided to grab life and drink it in to this degree? It seems to us you do it all. You’ve infiltrated the world of entertainment, you’re adamant about having a big personal life…

Heidi: Now I get to do all the things that I wished I could do. You know, before I became a model I always wanted to be a designer. So I finished high school and I would have gone to Düsseldorf to design school. But I never got to do that because I won a modeling contest and then traveled the world as a model. Now get to do the things that I always wanted to do. I get to design jewelry, clothes….and this perfume which was another challenge. I’m also someone who loves taking on a challenge, and I want to succeed. I’m passionate about that.

Jeanne: Fragrances are such a big business. But it’s so much more than just creating a fabulous product. There’s so much marketing that goes on behind it…

Heidi: Oh absolutely! And for me, the most important thing is to really have a product that is unique and that is beautiful to me. And then if people like, it they like it. For example when we were creating this scent, I got certain statistics about what sells and what doesn’t. A really super sweet perfume sells in certain countries more than in others. But I didn’t go down that route. I went down a route of a spicy scent, more unusual scent—not necessarily a scent that goes into the bracket of what normally would sell. But I had to do what I love to do. So either people like it or they don’t.

Jeanne: So it’s not necessarily just about making as much money as possible. It’s really about doing something that you believe in.

Jeanne: What part of the creative process speaks to you the most? What do you enjoy the most?

Heidi: To get what I want in the end! (laughs)

Jeanne: So it’s always about the destination, not necessarily the journey?

Jeanne: So you’re a perfectionist…

Heidi: I’m just a little bit of a pain in the booty! (laughs) I just know what I want and I try as hard as I can to get to it.

Jeanne: Well it’s important to have a vision. If you can’t see it, if you can’t dream it, you’re not going to be able to make it happen.

Heidi: For me, a lot of it is about fantasy, creating, thinking about things that are not out there, things that I would love to have…. but for me, it’s not very hard. That’s one thing I’m never really afraid of…. designing something new, coming up with something new. I get inspired quite easily. That for me is easier than other things.

Heidi: Like reading contracts for example… some people love that, or having an office, and doing a lot of paperwork and computer work…for me that’s harder. I like to draw. I like to paint. I’m very hands on. I like to make things.

Jeanne: But you are an artist. In terms of your modeling, you’re a performance artist. And if you’re talking about design, it seems that you’re a visionary in the way that you get your brand out there creatively.

Heidi: That’s where my passion is. That’s what I’ve always liked to do. Creating things, thinking about new things… People are always asking me how I come up with thing….like how do I always come up with a new Halloween outfit for example? Because I just do. Because I think about what could be a really crazy thing to do, like a really amazing outfit. And then I get amazing artists that can paint something that I have in my mind. And they just do it for me.

Jeanne: When people say your name, a lot of different things come to mind. Gorgeous woman number one, but other things too. Because you’ve got your tentacles out there…

Jeanne: But you were talking about Halloween costumes! (laughs) What would you hope that your brand stands for in people’s minds first and foremost?

Jeanne: What would you hope that you stand for?

Heidi: I kind of go piece by piece, day by day. I don’t think about what is this going to be in ten years from now. Each thing is a project that has an end. And either it has a short shelf life or a long shelf life, depending on how people receive it, whether they  love it or they don’t love it. People don’t necessarily love everything that you do. But I at the end of the day, you have to just do what you like and then people will either enjoy it or they won’t.

Jeanne: Does it surprise you when you stand back and see just how much you’ve built for yourself and what kind of a brand you’ve become?

Heidi: Sometimes I see things from ten years ago and I’m like, “Who is that person? (laughs). Yeah, it’s been a long journey and it’s been a lot of fun. I’ve been very lucky. Sometimes I think, if I wasn’t in this industry where else would I be? Where would I fit in? What would I enjoy doing? I really am in the place where I want to be. I like to create and I like traveling the world, meeting different people everyday. I feel like I’m exactly where I’m supposed to be.

Jeanne: You seem to have struck a most exquisite balance, the kind of thing that most women really dream about, and work their butts off to try and achieve. How easy is it for you to be walking this incredible line that you’ve managed to walk?

Heidi: I think a lot of people always think that I have a major plan, and I don’t to be honest. I just live. I want to make the most out of everyday. I love my family, I do everything for my family, and even though I work a lot they will always come first. And I do anything and everything for my friends. I don’t know…I’m a Gemini. There are two of me!