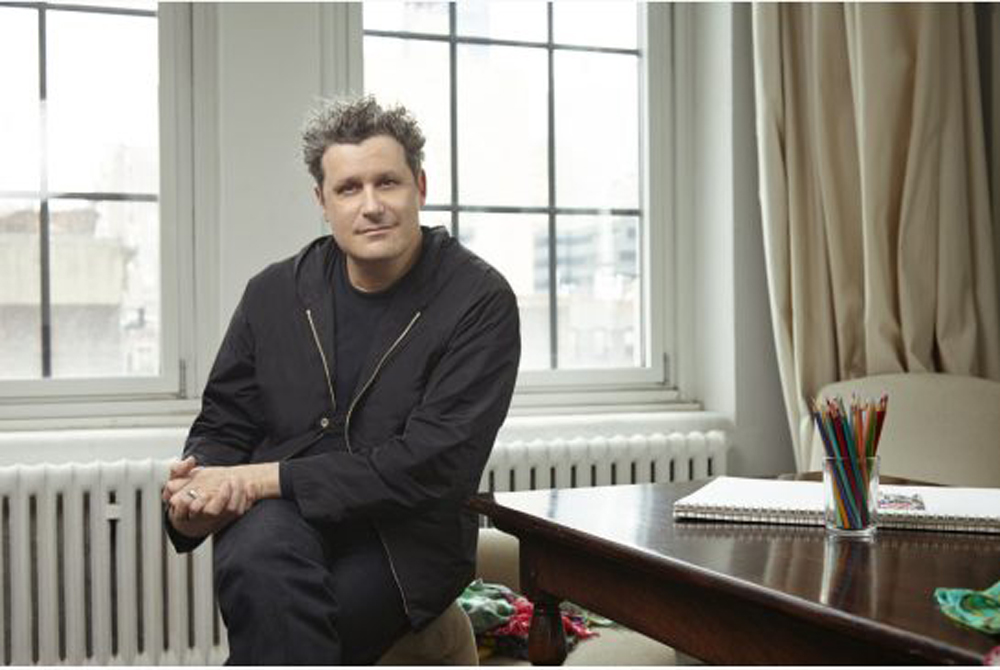 A purveyor of modern American glamour throughout the ‘90s, Brooklyn-born designer Isaac Mizrahi is adamant about working the fashion beat from every angle. A one-time Yeshiva student and performing arts major, 51–year-old Mizrahi got his first sewing machine at the age of 10. Combining his love of fashion and his enthusiasm for theatre, he created a popular label and staged one of New York Fashion Week’s most anticipated and exciting shows season after season. He also managed to get the house of Chanel to bankroll his business for six years, and regularly dressed a slew of stylish celebrities, including Julia Roberts, Nicole Kidman, Sarah Jessica Parker, and Natalie Portman. Not satisfied with a strict diet of fashion, Mizrahi starred in the documentary “Unzipped”, performed in a one-man show off-Broadway, hosted a talk show, authored two books, and still regularly performs cabaret. Add to that all his eponymous clothing lines, the lifestyle wares he designed for Target, his costume design for theatre and dance, and the two books he’s authored and you have a colourful personality that’s prime for selling tons of stuff on TV—which he does remarkably well. I caught up with Mizrahi recently when he came to Toronto to launch his brand on The Shopping Channel. We talked about fashion’s good old days, its current state of affairs, and the how shopping can make you happy.

J: You had the privilege of taking part in the scene at a time when fashion was defining itself as this colossal, extravagant medium of entertainment. You were a master showman, always approaching your work from an artistic point of view. That was pretty amazing.

I: It was. And now designers are making alliances with all kinds of artists. And fashion is now considered a kind of art form. When I was a kid, I used to be afraid to say that, because I remembered John Fairchild (former publisher of Women’s Wear Daily) who had loads of power. And he did not like the equation of art and fashion. He was right to some extent. Fashion is supposed to sell, it must sell, right? Whereas art doesn’t necessarily have to sell. It’s almost not supposed to not sell until the guy dies, and then you’re supposed to discover how great this guy was when he was alive!

J: Well, ideally. But at the end of the day, if the artist can’t sell then the artist starves and its over. Also think about the benefits of being an artist. You don’t really have four shows a year, you may just have one. Sometimes you have one every five years! So you have a real chance to be objective about it, stand back, look at it, scrap it and start again….

J: It’s that pressure that’s done horrifying things to some designers. And for the young ones coming up, I wonder how are they going to deal with how much they have to keep putting out there.

I: There’s a kind of cannibalism out there that shouldn’t exist. It happens so fast now, nothing is given this full kind of developmental period. That’s really awful.

J: One thing that’s become so imperative is this branding business. It’s about the brand über alles! The brand is sometimes more important than the products, I hate to say. How much fun has it been building your brand?

I: Loads of fun. Now everybody talks about branding, so they get a name and they try to associate all of this stuff around that name. And it takes a certain amount of time to gain credibility, and to bring this kind of collateral to this word. But when I started, I wasn’t doing that. I just kept at this one thing and eventually, it actually did grow and mean something. I think when people hear my name now, they think it has a kind of integrity and a meaning.

J: There’s such a sea of sameness out there that’s driving some people crazy. Then others just lap it up. How do you feel about it?

I: I feel mixed. The good ones are not the same. If you go to a Lanvin show, it’s amazing. Or Miuccia Prada really thinks about what she’s doing and makes it not look the same. But then you go to those shows where they just rent a tent at fashion week, get a slot, pay some people to be in the first row…. It’s just these schmattas, and I think that’s lethal.

J: You were on that ‘celebrity connections’ bandwagon decades ago. Has it been good or bad for fashion?

I: I don’t know. It’s become an industry unto itself. Like, who’s wearing which designer on the red carpet? But I remember when Madonna just came to my show because she really wanted to come to my show. Or Robert De Niro used to come to my show because he wanted to see beautiful models. It was an actual scene. Now it feels like there’s a lot of control, a lot of people pulling a lot of strings. I can’t tell whether it’s good or bad. But one thing I will say: There are certain designers I follow on Instagram who post pictures of clothes they are about to show in two or three days and I go like ‘You’re going to preview that on Instagram? Wait a second, has Anna Wintour seen that? Don’t you want to show it to Tonne Goodman and Grace Coddington before you show it to like everybody in the world on Instagram?!!’ It’s a weird thing to me, because there are no surprises, no mystery.

J: Well the world has lost a little bit of its mystique and its intrigue…

I: But you have to finish that sentence and say it’s gained a certain other mystique.

J: And I’m excited about what’s coming down the pipes, but it’s still nice to look back at the way we were. You came to Toronto to appear on The Shopping Channel. Why do think this is such a powerful new wave of retail?

I: Because it merges a lot of things I’m interested in. It’s this medium of television which I think is so amazing and also I get to talk about the clothes. People go ‘Oh, you’re so good because you are such a good salesman’ and I go ‘Well, I don’t even feel like I’m selling stuff!’ I’m really just telling you why it’s good a design to me, what I was thinking when I designed it, why I think it’s different from things out there, and why it’s good for you in your life. Don’t think I haven’t been tortured by this idea as a young kid about being a designer and creating all this stuff ! But if it’s really good stuff and people need it and it brings them some kind of happiness, then you’re helping them. You have to believe that or you’ll go mad.