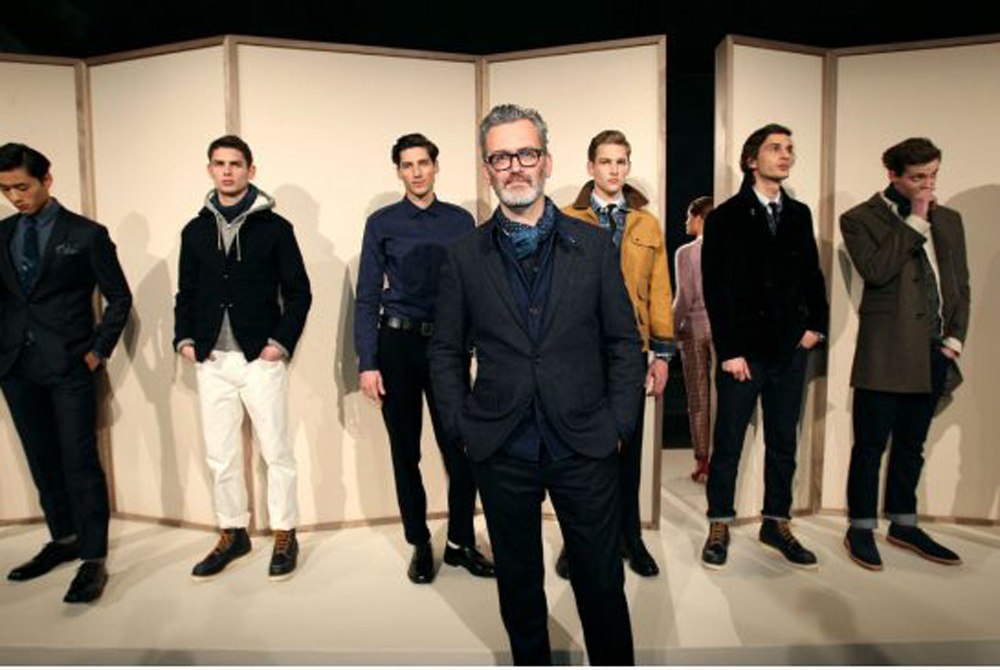 There’s something mixed up going on in men’s fashion. If you think you can handle it, has J. Crew got a collection for you! Those enamoured with the joys of offbeat colours, rugged and clean pieces teamed together, and unexpected graphic print combos are bound to delight in the news that the two new J. Crew stores opening here next month—Eaton Centre on October 3rd, and Fairview Mall at the end of October—will feature menswear for the first time in Toronto. According to Jenna Lyons, the savvy style goddess who presides over the iconic American label, men were “banging down the door” after the retailer opened its first Toronto store in Yorkdale last year—a location that only offers the appealing women’s line. The popular men’s line includes classics like the famous Ludlow suit and shirt, Italian cashmere, and Japanese denim. But these days, even the most conservative men are pushing their personal style envelopes and having fun with fashion too. It’s all about a play on irreverence which, next season, will result in an appetite for lavender and acid green jeans, mixing stripes and checks, and popping tuxedo jackets with denim work shirts. I took in the J.Crew men’s collection for spring at New York Fashion Week recently, and was wowed by its upbeat feel. The colour blocking inspired by American artist Ellsworth Kelly was especially striking. I spoke with J. Crew president Jenna Lyons, and menswear designer Frank Muytjens about the philosophy behind the optimistic collection, and how ready Canadians are to embrace the irreverent new mix that the label is suggesting.

HOW EAGER DO YOU THINK MOST PEOPLE WILL BE TO EMBRACE THIS OR WILL IT TAKE A LITTLE COAXING?

Jenna: I think what I do appreciate about J.Crew is that there are a lot of avenues to find that look. We’re not expecting you to wear a print and a stripe. We would love it if you do, but if that feels too much for you, you can do a tonal look. So we love head to toe corals and pinks and yellows. And it’s the same thing with men: We are not expecting you to do everything we do. But we’re just trying to give ideas away. You can get inspired–maybe you’ll go there, maybe you won’t.

Frank: Oh, menswear is on a roll! Look at men now. They are ready for anything. It’s great!

ARE MEN AND WOMEN ON THE SAME WAVELENGTH WHEN IT COMES TO SELF EXPRESSION?

Jenna: I do think that a lot of what you see out there on blogs like The Sartorialist is saying that people are really interested in having personal style. It’s become cool. When I was growing up it was all about looking like everyone else. Now it’s about having your own personal style and being an individual and I think the men are getting just as much attention as the women, which I love. It’s been great for us and allowed us to experiment a lot more.

YOU’RE ENCOURAGING THE MIXING OF SENSIBILITIES, FABRICATIONS, EVEN ATTITUDES—ALL IN THE SAME LOOK.

Frank: I think that’s one of our signature things. We do it to try to explain to a guy how he can mix things from different areas within one look. And it might be something he has in his closet already, like a jean jacket he can wear under a sport coat–something he didn’t think of before. Or maybe he can just wear boots with a suit. You know, all those different things together make one’s style more interesting.

WHAT DO YOU SAY TO PEOPLE AFRAID OF TAKING CHANCES, OF STEPPING OUTSIDE THEIR COMFORT ZONES?

Jenna: I mean, start somewhere. I think sometimes it’s about listening to when someone pays you a compliment. Maybe try that again and push it a little further. I think you just have to dive in. Fashion mistakes are okay. You can make a fashion mistake. Just go for it!

Frank: We have a feature on our website called ‘Ask Jack’. And Jack is a guy who really exists: He has a wife and beautiful kids and he gives great advice to guys who are a bit insecure. I would say just go for it and follow your instincts! It’s great to develop a personal style.

BUT THERE’S ALWAYS THE DANGER OF BEING VICTIMIZED BY TRENDS. HOW DOES ONE GUARD AGAINST THAT?

Jenna: I think that’s the mistake that so many people make. They feel that, ‘Oh, I have to look like that person,’ and do that trend. There are a lot of trends I had to stand aside and say, ‘No, I cannot wear a bellbottom jean.’ It just doesn’t work for me. And that’s okay.

Frank: I think menswear is more about shifting little things here and there each season. In menswear, hemlines don’t go up and down every season. I think for menswear you have a frame to work in and then that’s it. There’s a sport coat, there’s a trench coat, and what you can do is make it modern again by changing the fabrication, changing color, changing fits and making it modern, but not trendy. It’s not about being trendy. We are in it for the long haul. We are in it for longevity and I think our guy appreciates that.