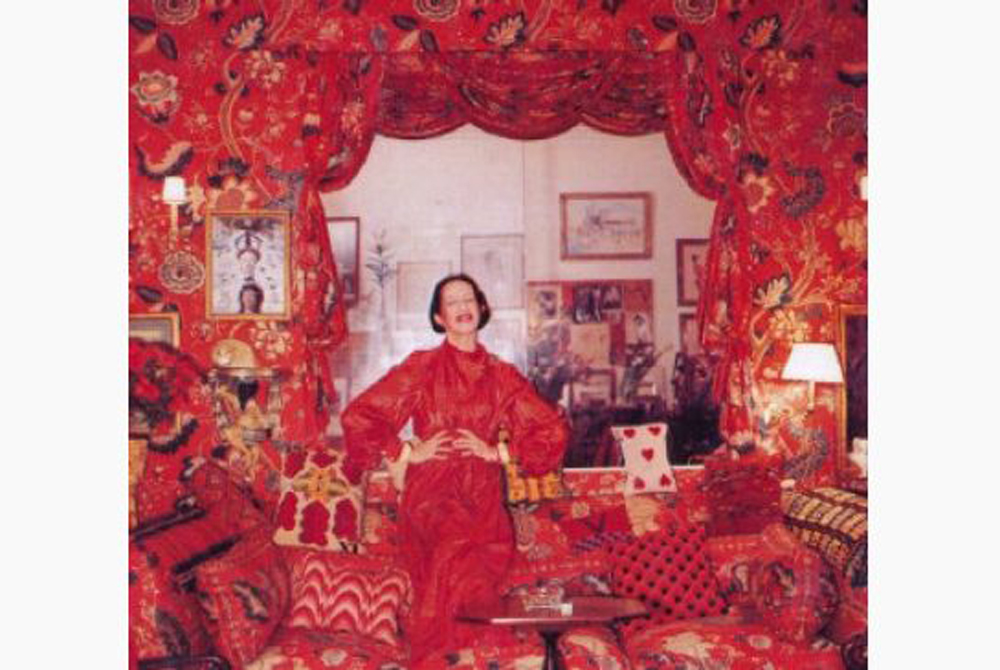 Fashion influencers come and go, but few have had as much impact as the legendary Diana Vreeland. The Paris-born fashion doyenne and visionary, who began her career editing Harper’s Bazaar back in 1936, went on to become the editor-in-chief of Vogue in the glorious ‘60s and later in life, until her death in 1989, was the “muse-in-residence” at New York’s Metropolitan Museum of Art.

Responsible for inspiring generations of designers and photographers alike, the unconventional Vreeland was passion personified. “Passion for passion,” she once said, “you can learn anything, you can do anything, you can go anywhere. Don’t you think passion is very rare? And I think that it’s getting rarer because there is so little around us.” For those of us fashion enthusiasts who grew up in the ‘60s, Vreeland’s influence was inescapable. Now, a tribute to Vreeland’s magnificent style legacy has just been published in the form of a luxe coffee table book entitled “Diana Vreelend: The Eye Has to Travel”. Lisa Immordino Vreeland, married to Vreeland’s grandson Alexander, is responsible for the exquisite book, which is filled with insightful essays and sensational archival images from Vreeland’s life and the pages of the magazines she helped mastermind. Though Lisa Immordino Vreeland never met her late grandmother-in-law, she was determined to shed some light on the extraordinary editor who was famous for inimitable savvy, rouged cheekbones, and extravagant sayings, like: “Blue jeans are the most beautiful things since the gondola.”; “I hate narcissism, but I approve of vanity.”; “”The only real elegance is in the mind. If you’ve got that, the rest really comes from it.”; and “Pink is the navy blue of India.”

Lisa Immordino Vreeland, who’s also produced a new documentary on Diana Vreeland, is in Toronto this week for a book-signing at Yorkville’s Teatro Verdi. I had the opportunity to meet her when she was here for the Toronto International Film Festival, and took great delight in finding out more about fashion’s inimitable forward thinker.

Jeanne : Growing up in the sixties, Diana Vreeland had such an impact on our hearts and minds. I remember it was Vogue’s “People Are Talking About…” section in 1964 that first turned me onto The Beatles! That was also where I first saw a picture of Mick Jagger. She really viewed fashion as so much more than the clothes. How do you suppose she developed that particular sensibility?

Lisa: I think when you look at her years at Bazaar as fashion editor—the foremost fashion editor—you can really see her whole sense of gesture and colour and fantasy and imagination that came out in all those editorials. And she wasn’t necessarily on all those shoots, but she got to that point where she had great fashion editors who followed her advice and photographers who followed her advice. When she got to Vogue where she was the Editor-In-Chief, nobody was more ready for the sixties than Diana Vreeland because she was such an open person. She just took a zeitgeist of what was happening in the streets and societies and art and culture and literature and she put it on those pages. And I think that Vogue was very lucky because those were the golden years of Vogue.

J: Her energy, her vibrancy is second to none. And I find this personally very inspiring: She- was about my age when she took over as an Editor-In-Chief at Vogue. That’s incredible! There she was on the verge of turning sixty, and she took this monumental job when most people are thinking about getting out the business or retiring. What do you think she did for women in that role, you know “aging fashion mentor” role?

L: The one thing that I discovered is that she didn’t like to talk about a lot of things personal things. And so while feminism was something she would never discuss, she clearly went out and really made a lot of changes. And she was a society woman, essentially. She was a working society woman who took her job very very seriously. It was her life.

J: But she maintained a wonderful sense of humour about fashion in general. That was almost her mantra– not to really take it all that seriously.

L: That’s right. She had a great saying: “It’s not about the dress you wear, but it’s about the life you lead in the dress.” For her, it was about the layers and the textures beneath it all. That’s what she set about to do when she was at Bazaar and Vogue and then at the Metropolitan Museum’s Costume Institute, because she wanted to tell a story. For her the story was most important, regardless of the fact that the story may have been slightly skewed and not historically correct. Because once she went to the Costume Institute, she entered this very academic world and she really didn’t have an education. For her, education was dance.

J: Fashion editors seem so commonplace now. It seems everybody and their mother aspires to be a fashion editor. She was one of the truly great original fashion editors, and her whole mode of editing was what set the tone for pop culture at that time…

L: Oh certainly. Richard Avedon, in his memorial speech at her eulogy, said that Diana Vreeland invented the fashion editor. She was able to give inspiration to photographers. And there’s a moment on this great shoot when Avedon went to Egypt with (the legendary model) Dovima and Vreeland said, “You have to think of Cleopatra, when you’re shooting Dovima. Think of Cleopatra walking those roofs with all these old people!” She set his mind in a certain way so that the feeling she wanted in those pictures came out through her words. She played a very important role, and continued to play this role in a lot of photographers lives. But at the Costume Institute she touched everybody’s lives in a certain way, and either helped them make career decisions or was there for them as a friend. I think that’s very important in life. She really pushed people forward.

J: She was one of the main reasons that so many of us first fell in love with, back in the sixties. Now the way fashion has been hyped to the max, people can’t get enough of it. What do you hope young people will glean from this particular historical perspective that you’re presenting?

L: I really set out to do this for the young people, because I think that the older generation is already in love with Mrs. Vreeland. Nowadays, it seems that maybe young people aren’t looking through books as much. And their definition of things comes only clearly from the Internet. This was a way for me to offer a reminder, to say, “You have to look at things carefully.” I went through these magazines and picked photographs that weren’t iconic photographs, so people could really understand what her contribution was. I think it’s really a reminder this is a woman who was not only a tastemaker, but who pushed the boundaries of everything. She used fashion to define a new way of life. And it’s a moment when everybody really needs to think about that , not just the younger generation. We have to understand who Diana Vreeland was because there are other important, great tastemakers who we should all know and we be talking about.

J: Besides the phenomenal work that she did with magazines, there was her second act with the Metropolitan Museum, masterminding and mounting 15 exhibitions. Now, with all the interest we see surrounding fashion exhibits, like the recent phenomnal McQueen exhibit at the Met, do you think this was perhaps a sign that she was indeed ahead of her time, by even envisioning the importance that the historical perspective would play on fashion, even for this younger generation?

L: I think so. Dress wasn’t an important part of museums before. They were just dusty garments that were put into boxes. What she did was she gave life to the subject. And perhaps she wasn’t academic in her approach. Sometimes she’d put the wrong hat and gloves and jewelry with a certain dress. But it didn’t matter to her, because if the feeling of the times was coming across, that message was much more important. She really made the Costume Institute and dress in costume come alive in museums. She made it relevant. And I think that when you have a museum show like McQueen’s “Savage Beauty”, that was her fantasy. That show was such a huge success not only because the Costume Institute did such a fabulous job, but people were allowed to escape into McQueen’s mind. And I think that’s a form of escape that people are always looking for.

J: Thank god she really had that incredible opportunity. It was so well deserved. But when she left Vogue, I’m sure it was a very trying time. She was in her late sixties…

J: And still had so much to say!

L: But even though she was fired, she didn’t crumble completely. But I think you know she must have had a tough time. And if you think about it, when she wasn’t made Editor-in-Chief of Haper’s Bazaar, and she left that magazine, fortunately, Alexander Lieberman came looking for her. She had her share of disappointments, but she was very good and had such an elegant way about her. She just followed her mind and her imagination, trying to do all these different things.

J: Do you ever fantasize about what she’d think of today’s fashion landscape—what it’s become and where it’s going? Even the whole high/low mix of fashion…

L: I think that she would love the Internet. She’d also love how all of these rappers have become such stars…. She was so great about being apart of everything. That was what was so fascinating about her. She may have had a friend who was a count or a princess, but then she was great friends with the taxi driver. I think she would have embraced a lot of it. She was just a player, and she would have welcomed a lot of different ideas. She wasn’t an elitist. Perhaps that’s something she would have a tough time with today, this elitism that the fashion world has gone into. I just think it’s just such an important message to remember.

J: She had that kind of look the French call “jolie laid”… She wasn’t conventionally beautiful at all, but turned herself into a work of art. What do you think her sheer physicality did for the way she viewed the world?

L: Her mother called her “ugly little monster” from a very young age. And she had a beautiful younger sister. So I think that when you have a mother that tells you that, well, we hear lots of stories about what happens. Diana Vreeland decided to transform herself into an original. She had real impetus to change herself and when she did that, she decided she was going to help everybody else look at the world in a different way. I interviewed about sixty people for this project, and there was just such enthusiasm and this desire to speak about her. She had this generosity of soul, and it was consistent. I’m not saying she wasn’t difficult to work with, and she felt that everybody should be working constantly because she had a certain standard. But despite that, she was always there for people and she was always supportive. And I think that that is that’s a message in itself.

Lisa Immordino Vreeland will be signing copies of her book “Diana Vreeland: The Eye Has to Travel” on Wed. Oct. 26th, from 3 to 5 pm at Teatro Verdi, on Yorkville.