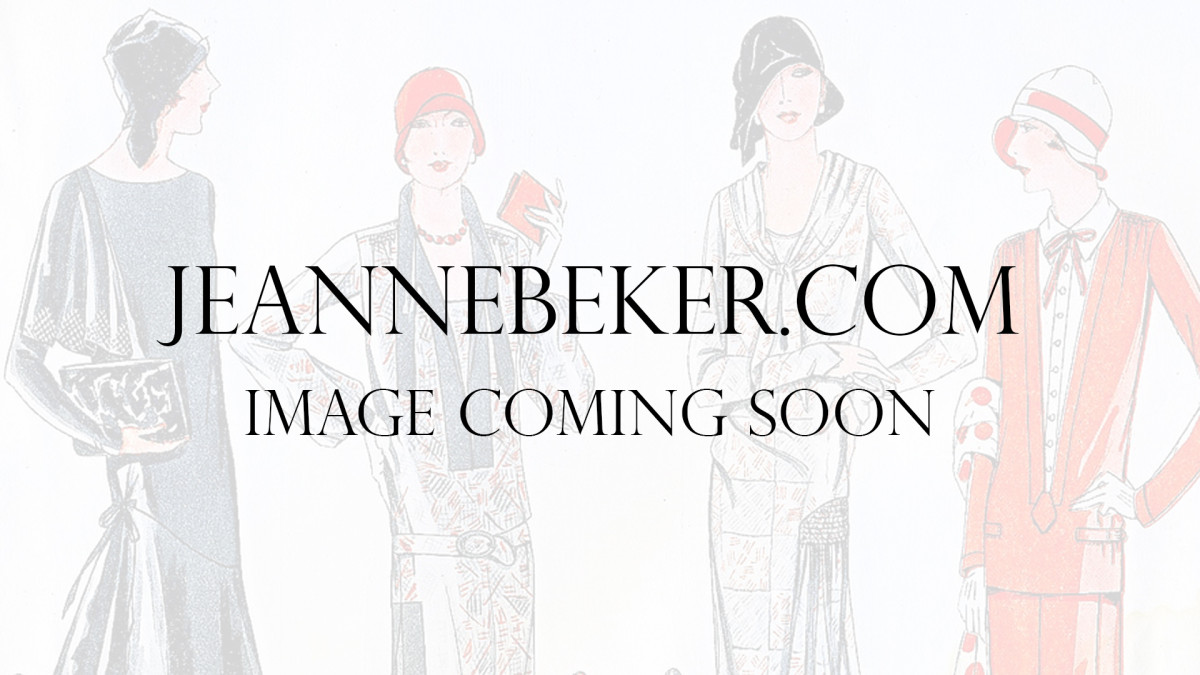 The first time Kate and Laura Mulleavy visited Toronto back in 2007, I ‘m not sure what surprised me most: Their gossamer, couture-quality garments, or the fact that these sisters, then in their mid twenties, were so refreshingly unaffected and delightfully grounded. Raised by a botanist father and artist mother, the self-taught designers, who began drawing as little girls, grew up in California, gleaning untold inspiration from all the natural beauty of the flora they were exposed to on their visits to the Huntington Gardens in Pasadena. They also told me that watching Fashion Television provided them with a wondrous window onto the glamourous fashion arena, helping to fuel their creative fires and nurture countless fantasies. After studying such academic subjects as literature and art history at Berkeley, the Mulleavys decided to focus on their true passion, and launched their first collection in 2005, under the Rodarte label—a moniker taken from their mother’s maiden name. Their first offering was made up of 10 hand-finished pieces, and one of their remarkable creations landed on the cover of Women’s Wear Daily, just days after the sisters’ first trip to New York. They subsequently won the hearts of heavy hitters like Anna Wintour and Karl Lagerfeld, wowed some of fashion’s hottest retailers, and helped set new industry standards in American fashion with their intricately detailed garments and poetically romantic esthetic.

I visited Kate and Laura at their Los Angeles studio not long after my initial meeting with them, and was bowled over by their painstaking attention to craftsmanship. Their workroom felt like an old world atelier, and the reverence they showed for their artistry was humbling. Now, with a cache of prestigious awards under their belts; a savvy celebrity clientele which includes the likes of Cate Blanchett, Natalie Portman , and Keira Knightly; and costume credits for such prestigious projects as the hit movie Black Swan, and the LA Philharmonic’s new Don Giovanni opera (with set designs by architect Frank Gehry), the Rodarte sisters are counted among America’s most respected and important design talents. Kate and Laura were at The Room in Toronto this week to meet customers, and I had the chance to talk with them about their art, their esthetic, and what keeps them so grounded.

Jeanne: When I first met you, it seemed what you were doing was so revolutionary. It was a return to an old world way of seeing things and creating artistry that a lot of people had forgotten about. Have people caught up with you now? Or do you still feel like you’re on your own path?

Kate: I feel like we’re really on our own path in the sense that we’re very aware of wanting to create our own visual experience for people, and that’s really about staying true to who we are and not worrying about what the overall trend for the season is, or what other people are doing. In fact a lot of times people say to me ‘Oh did you see these other shows?’ and I can honestly say that no, I didn’t see them. It’s not that I wouldn’t want to, and in fact I love looking at other design and I’m a fan of a lot of other designers. But I like to stay more insular because it’s important for Laura and I to figure out what our voice is. That’s a huge part of where we are now and where we’ll be in the future. And it takes a long time to develop into that. I think one of the core parts of what we do is not trying to be the same as what everything else is.

Laura: And you experience it more at the beginning. It feels so different, and then you start realizing it and notice other ways in which you make a different choice than most people would. I’ve only had a few instances where I felt kind of removed from things in a positive way. So it’s never been anything that I felt insecure about. But it’s something that helps define who we are and helps us make choices along the way. It’s been a positive for the way we’ve grown our company and the way that we work

J: At first there was a bit of shock value to some of your pieces because they were so incredibly unusual: The artistry and the techniques that you used were so unconventional. How have you felt your customer has inspired you?

K: That’s a really interesting question. We’re so lucky because when people ask us about our client, I can always say that we come from a very modern philosophy where we don’t feel like we define a woman or define the person wearing our clothes. That is actually left to the individual, and our clothes are part of the story that they’re going to tell. So our customers integrate something we’ve done and make it their own. And I think that’s a very modern sensibility. I think it’s very much about empowerment for the person wearing the item of clothing. Because some of our techniques are unusual, the people that are attracted to what we’re doing are amazing people from all different walks of life. I look back on some of the things we’ve made, like this collection in which we’d literally burned dresses that went to a store. I remember seeing them, on a store floor, and I thought, ‘This really doesn’t look like anything!’ This is not even really clothes anymore in a strange way. And I realize that for people to be connected to what we’re doing, it’s really about an emotional connection. Because of that, we just ended up having so many different clients.

J: It’s really no surprise that people with a real love of the arts in general gravitate towards what you do. How do you feel when you see one of your creations surface on the red carpet?

L: Oh, it’s always fun and always a surprise. It’s fun to interact with people. And when you’re building clothing, you just want someone to feel really beautiful and special, whether it’s someone that’s wearing something for a big event, or it’s just someone wearing a piece because they love it. You get the same joy and pleasure out of it. Except for the one thing that’s nice about red carpets is that you get photos of the look immediately afterwards!

K: (laughs) we should write on every item of our clothes–

L: Yeah. There’s not much documentation of where your work lives, so it’s nice to see it.

K: Plus our parents have fun looking at it. (laughs)

J: (laughs) They must be mighty proud of you! But they’ve always been supportive. And it was your father’s work that really inspired you initially to appreciate natural beauty.

L: We grew up in northern California and I think both of our parents early on taught us that you need to be observant of things in a small way, and in a large way. My father studied fungi and my mom was an artist. So I don’t think we ever left greenhouses or the forest. It was really a magical place to grow up, outside of the Santa Cruz Hills. We’re the people we are because of where we grew up and how we were raised and what we were shown. Our weekends were spent going to look at tide pools!

J: It also speaks volumes about how you now manage to stay so grounded in a business that’s rife with drama. And then there’s what the business has done to some of our greatest talents…. But you somehow have learned how to keep on an even keel.

L: The reason why we like to do what we like to do and why we get involved in so many things outside of just making a fashion show or collection is because we really do this because it’s creative for us, and there’s fulfillment that comes out of it. We work with amazing people and they can teach us things and we can learn, whether it’s the team members you’re working on with to build something, or it’s just people that go into making a project come to life. I feel really fortunate when we get to work with people outside of our own jobs.

K: We’re also very lucky that we were always very close and we have each other. That’s really changed things for us. Sometimes I look at other designers and think it must be so crazy to go through all of that by yourself. But just having each other definitely has made a difference . Also being in Los Angeles is such a major part of who we are in terms of design and esthetics. In a sense being in LA has also allowed us to really focus on or collections and for us it really is about the creative moment behind everything we do and not so much about all the aftereffects of it.

J: You walk such a brilliant line between you art and commerce, retail and theatre. You’re designing for real women but you’re also designing for the stage now, and you’ve designed for film. What’s more creatively satisfying?

K: I feel like they’re all creative in really different ways. A fashion show is one of the most creative spaces for a designer because it’s this moment where the world belongs to you, and you put all the pieces together and see the things you’ve been focusing on. But then there’s film where you switch off from being a fashion designer and it’s being a costume designer which is a totally different reality. But in the end, there’s a different type of legacy. I remember after Black Swan came out we were on Hollywood Boulevard and someone was dressed up as a Black Swan. On Hollywood Boulevard you usually see a Spiderman, or Darth Vader, or Yoda! Seeing Black Swan and knowing that that was the costume we created was a pretty major moment for us and I thought, ‘Wow! T his is beyond what I even thought it would be!’ Then we did the Don Giovanni opera that just opened last week. I thought it would be similar to working in film, but it was a totally different process. It’s different when you’re creating clothes for specific characters. But each project has its own kind of feeling and energy. They’re all fulfilling in different ways. And they all present different challenges.