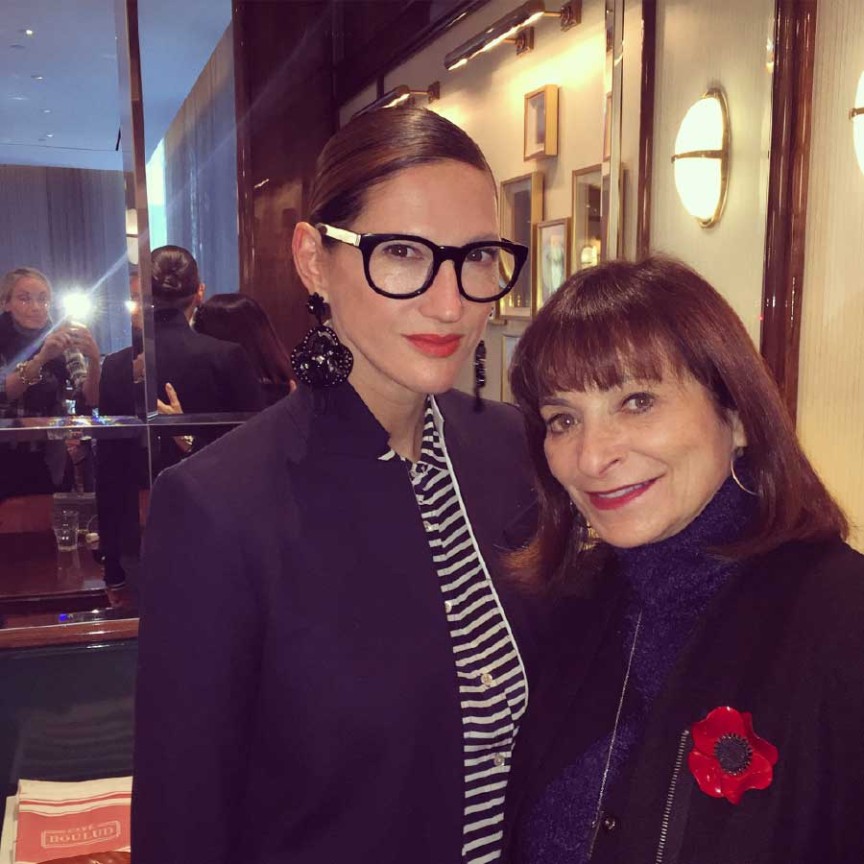 Girls crushing on cool, successful girls is pretty de rigueur these days. And one of fashion’s most successful, ultra cool “girls” that legions of ladies around the world have crushes on is J. Crew’s president and creative director, Jenna Lyons. The 46-year-old, six-foot style icon, who worked her way up at the American sportswear company for over two-and-a-half decades, is a true original whose creative direction has been cited as the reason J. Crew became a cult brand in the first place. The bespectacled, Boston-born beauty has mastered the mix when it comes to sartorial panache, and in doing so, has set an inspiring example for those who appreciate the art of juxtaposition in dress. Although J. Crew has seen its share of tough times these past few months, in a retail landscape that is increasingly challenging, Lyons is soldiering on and recently paid a visit to Toronto to meet with adoring customers. I had the luxury of cozying up with Jenna Lyons over coffee at The Four Seasons’ Café Boulud to talk about the ‘casualization’ of fashion, the magic of the mix, and what’s ultimately at the heart of truly great personal style.

JB: J.Crew has planted itself firmly in people’s minds as a great American sportswear brand. But in the light of globalization, does that really mean anything anymore?

JL: Only in that there’s this sense that things don’t last anymore. There aren’t a lot of things that have any staying power and there isn’t necessarily a sense of style that has staying power. Things now are so transient. Things switch so quickly, and so I do think there’s something relatively iconic about American sportswear that seems to resonate with our customers… whether it’s the undertone of men’s wear or the idea of mixing cashmere and pearls and ripped jeans—those kind of things where’s there’s that dichotomy and mix of things. That’s always been important to us. I think there’s some iconography associated with American style. It was the first place that saw casualization of clothing. Whether that’s a good thing or a bad thing, it’s everyone else’s decision to make. But American pioneered jeans and chinos and all that. I just happen to like them with heels!

JB: Do you see that “casualization” of fashion continuing?

JL: I think that it’s continuing… Listen, I’ve never seen so many people wearing yoga pants on the weekends! It’s a totally different world. I completely appreciate and want people to be comfortable. I remember when women were burning their bras and doing away with tight corsets and all that. Of course, that should be a personal choice. And I remember when casual Fridays first happened and then there was kind of a revolt, particularly with men. They’ve sort of gone back to wanting to dress in haberdashery being a little bit more suited up. So I think that people are also wanting to retreat a little bit back to a sense of tradition. Both things are happening at the same time—dressing up and dressing down. And menswear may be shifting in a bit of different direction than women’s wear. But I do think that as the casualization continues to happen, there are people that are going the opposite way and wanting to dress up. I will never go for casual Fridays. I’ll go for mixed casual everyday, but never a full head to toe casual.

JB: The first time I met you backstage at the New York shows, I was struck by the wild, bold mix that you had going on, both in the way you personally dressed and in the way the J.Crew collection was styled. It was dazzling and colour figured big. You were mixing prints and patterns in irreverent ways. Now we see that bold mix on high fashion European runways…

JL: Yeah, it’s interesting. There are two completely different waves happening now. Gucci is taking things in that direction of incredible luxury and textures and mixing fabrics and colours. And there’s gender fluidity: Boys being girls and girls being boys, and we’re sharing each other’s clothes, which I love. I’ve always appreciated the idea of men’s clothes for women. And then there’s this very sexy, sultry “Balmain” section of what’s happening in the world. And that’s a totally different vibe. What’s interesting to me is that they’re probably both popular. Then Celine has been the reigning queen in terms of that very clean, very paired down look. And then looks what’s happening you know with Raf Simons leaving Dior and Alber Elbaz leaving Lanvin…. I mean God! There’s a massive shift. But meanwhile, the styles that pervade are all so different: the super clean, simple, paired down pallete, then the sexy, amped up beauty glamour, and then the Bloomsbury mash up, with a little bit of sultry sexiness into it. That’s kind of awesome. I love that and it makes me excited.

JB: Well nobody wants to be a purist. That’s a little too boring….

JL: I also feel that it’s nice everybody can find their way. I wouldn’t expect Kim Kardashian to start wearing Gucci, because it wouldn’t make sense for her. She is who she is. She’s got that gorgeous figure. And then there are a lot of people who wear Celine. Gucci’s not going to be right for them. (British singer)Florence Welch would be perfect in Gucci, and there are lots of other people who can pull that off . And when you look at some of the pieces , like the number of fur-inserted loafers that I see walking around in my office, well it’s so exciting!

JB: There was a story in the New York Times recently by Vanessa Friedman that talked about how so many celebrities are being dressed by stylists that it’s a shame we can’t see these stars just doing their own crazy thing…

JL: I do think that it’s interesting. I remember reading an article in the New Yorker about Julianne Moore, and she talked about how she’d gone through this really long process developing a dress with Tom Ford. He made the dress for her, but at the very last minute, she wasn’t feeling it so she ended up wearing something else. And he was like, “Don’t worry about it. It’s totally fine.” And because of that, she felt this incredible kinship to him, and it’s made her very loyal. I think for celebrities, it’s incredibly hard. You can’t call in things from all over the place and have all these people vying to dress you. You have to develop relationships so that you can have someone who understands you, who understands your body, who knows what you like. Because these celebrities don’t have time. So as much as I think Vanessa is right, I also think there’s a flipside of that. There’s something to really developing a relationship with a designer, or with someone that makes a person feel good. I have my peeps, and they make me feel good, and they send me things I want and at the same time, I can be a little bit more creative with my clothes. But I do think it’s hard for celebrities and hard for just normal people too. Who has time?

JB: But so many “normal” people as you call them do look to celebrities to take ideas from and be inspired by.

JL: Totally. And that’s why what’s happening right now is so interesting. There are so many different things going on in high-end fashion, that are very accepted, and very bona fide. All of a sudden, there’s this sexy, sultry thing, then there’s this other Gucci mash up, and there’s this Celine, more clean paired down look. And all of them feel totally right. Not one of them would feel wrong. So there are more options. It used to be about only one idea. And now I think there’s just more opportunity. Do celebrities mix it up as much as they could? Not so much. I think they’re scared to step out of the box because people are so apt to comment and criticize. People are so critical, it’s shocking to me.

JB: But we are living in such an image driven time that it’s nuts. People are living through these Instagram images and how popular you are according to how many likes you’re getting… Everyone just want to please.

JB: Do you think it’s going to change?

JL: I’ll be really interested to see what happens with the younger generation. I have a nine year old and he wants to have his own Youtube channel, and I’m like, ‘No, that’s not happening!’ I hope that at some point there becomes a critical mass where people want to slow down. People often ask me what’s the best way to get a job or what’s the best advice and I’m like, ‘Take out a piece of paper, take out a pen and write something… like a thank you note. Or write me and ask for a job.” I think that there is this over reliance that you can live your entire life through your phone. And I just don’t think that’s true. The things that feel meaningful are those personal touches, like sending a physical note. Don’t send me a thank you note with an email. It’s just not okay. I think that the part that scares me the most is that people aren’t picking up the phone and calling each other. If my son is near a phone, I’m like, ‘Call me. I want to talk to you.’ He should call me because when he asks me for something in a text, I always say no. But when he calls me, I’m like, ‘Awwwww….’ I hear his voice and I melt. And I’m like, ‘You can have whatever you want.”

JB: And the power of people far beyond the trappings of the style world. People look at you as an amazing clotheshorse and a source of inspiration, sartorially speaking. But what really shines through with you is that humanity beneath the fabulous garments. I think it’s something you must have consciously worked on, despite the fact that you work in the trenches of material fashion.

JL: I just feel so connected to the personal side of it, not the glamorous side. Don’t get me wrong: I love a party and a little red carpet action. But what I really enjoy is getting to meet or sit next to someone amazing . There’s no question that style goes far beyond what you wear. The people who I think are the most elegant are the people who make good eye contact, have a firm handshake, smile, brush their teeth. That’s one of the reasons I worry so much about some of the younger generation. I’m constantly telling my son to look people in the eye when you talk to them, don’t look down when you’re talking to the waitress… When someone comes up to talk to you, look up and say hello. I was a waitress. I remember what it felt like when some people didn’t look at me when I came over to the table. It felt awful. And people will remember the way you treated them more than they will remember your outfit. And that’s important and that is part of style. I think those things add up far more deeply and sort of have much more weight in the end than being able to put a couple of things together that look cute.

What a smart, sad, and sobering article!! Sweatpants Forever: How the Fashion Industry Collapsed - The New York Tim… twitter.com/i/web/st…

These two are dreamers AND doers: A wonderful and important time to support small farms! indiegogo.com/projec…