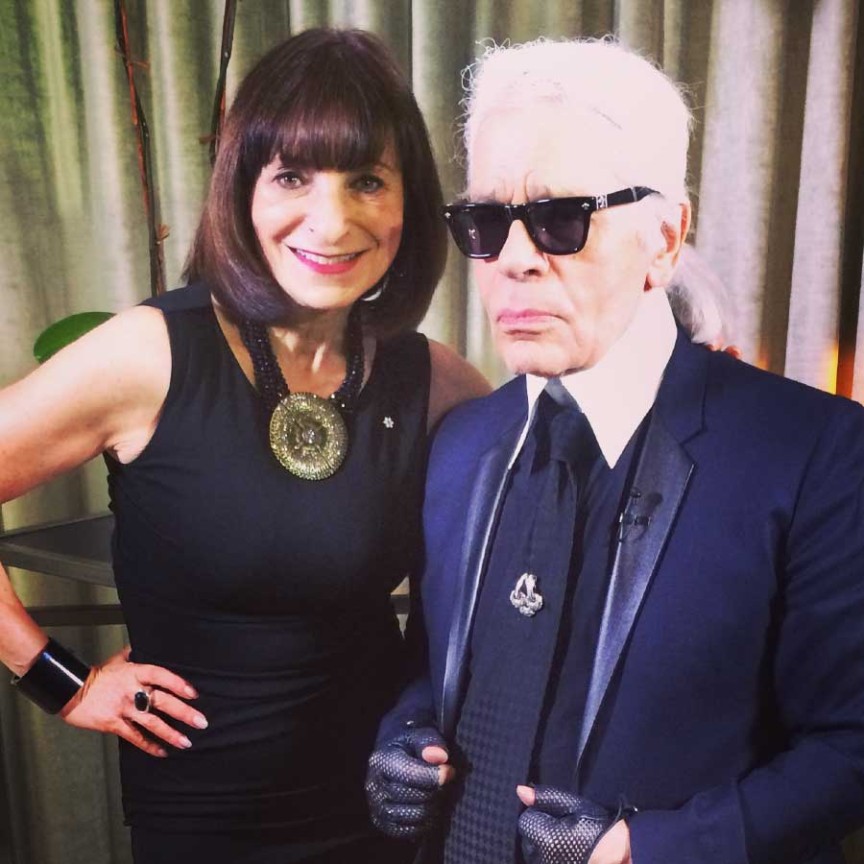 Provocative, playful, intellectual, and irreverent, Karl Lagerfeld is a colourful study in creative prowess—a multi-tasking renaissance man who’s arguably the planet’s most recognizable and prolific designer. The genius behind Chanel, Fendi, and his own eponymous Lagerfeld label boarded a private jet for Toronto recently, his beloved cat Choupette in tow, for a first-time meet-and-greet with Canadian media and discussions with Freed Developments and CD Capital Developments, the Toronto developers who’ve commissioned the “Kaiser”, as he’s affectionately known, to design 2 residential lobby spaces for the new Art Shoppe Lofts and Condos, going up on Yonge St., south of Eglinton Ave.

With a handful of his own self-decorated homes around the world and a couple of hotel projects to his credit—including two suites he’s been commissioned to design for Paris’s famed Crillion Hotel, which reopens this year—the ageless Lagerfeld (who was born in 1933 or 1938, depending on who you believe) is no stranger to interior design, though he claims it’s not a job he’s really after. But he is constantly intrigued by new challenges and going where he’s never gone before. I caught up with the legend at the Four Seasons Hotel upon his arrival in Toronto for a cozy conversation about drive, living in the moment, and why his cat is the perfect muse.

J: What’s so interesting about this new Toronto project is that you’re designing a communal space where there’s a lot of coming and going. It’s a space to be enjoyed by a lot of different people so you have to make it palatable to everyone.

K: It’s for all the people who own an apartment in that building but at the same time, the minute you enter you have to feel that you are in a special place. Most of those places all look the same, so it’s up to me to find the idea and to get the version of something that’s different, that’s special. What will make these lobbies different from the other buildings, the minute you enter them? And you can use modern architecture, modern furniture… things I’m really interested in.

J: What excited you about the prospect of a project in Toronto?

K: Because I have never been to Toronto. I did a hotel in Macau too because I had never been to Macau. You know I’m not a tourist. I only go to places where I have something professional to do. If not, I’m not interested. I have no time for that. I like to discover cities and countries where I see the people who are doing something we’re involved in. Otherwise, it’s not for me.

J: Did you have any preconceived ideas about Toronto?

K: I only have ideas. That’s the only thing I have!

J: But what was your idea of Canada? How did you perceive it?

K: Well, I came to get an idea of what it really was. Because I have Canadian friends, I know Canadian people like you, and then I love Xavier Dolan’s movies and things like this, so I vaguely know about Canada. I once had a house in Vermont near Montreal. But I never went there you know because I never had time to go there. It was a beautiful American Greek revival 1840 on an island in the sea, and I redid it in the most expensive way, and then I sold it because I had no time to go there. So if I do something professional like I’m doing here, I can come and go and I have the feeling that I’m doing something productive. To be in a beautiful house, doing nothing, in the middle of nowhere is not for me. Even if it’s the most beautiful place in the world.

J: You are so driven. What is that? What are the voices in your head that are always telling you to go do more, more, more?

K: Curiosity I think. I want to know, I want to see, to be informed. I don’t know why. Personally you never ask yourself those kinds of question. And I have a kind of enthusiasm for everything I hadn’t seen before that makes me go. That’s why Toronto is a good idea because I have never been here. And if I didn’t have an idea and a proposition to do something like that, I would never go, because I am not a tourist.

J: It’s wonderful that you are so in touch with your inner child. I think of your curiosity, your wonder about the world, as being kind of childlike.

K: Yeah, you can say I’m childish. I like the idea. I never wanted to grow up

J: Was it ever a struggle for you to keep it childlike, because there are so many pressures of the adult world…

K: No, you get use to everything. I’m very much against designers who do things and then say, ‘Oh, it’s too much pressure!’ Then they should not accept the job you know? The fashion job is becoming tougher and tougher, because there are more and more seasons. In the past there were four collections a year, I remember when I signed my contract for Chanel, they were for four collections. Now I’m doing eight. And it’s me who told them you have to do that, because of the way business is going.

J: But it’s crazy making. Don’t you worry that everything’s getting watered down? You’re putting out so much stuff out there….

K: As long as I’m not getting watered down myself I couldn’t care less about the others!

J: And you never worry about the well running dry?

K: No, no, I don’t even have time to have those kind of strange ideas.

J: You traveled here with your cat, Choupette.

J: And why do you feel you have to have that kitty?

K: Because you know everybody wants a muse and that’s my muse. It’s a good thing it’s a silent muse, because I have other muses, but they talk too much.

J: What do you say to the young people who want a piece of that fashion business so much. What advice do you give them?

K: Maybe they want a piece but I hope they are good cooks, and can offer something to fashion too. The idea of only wanting a piece isn’t good. You also have to be capable to give something. But there’s no lesson or advice to really give anybody. I’m from another era, from another world. Things are different now. Everybody has to find their own way. There are no rules. You can arrive in many different ways, so people have not only to listen to what they’re told, but they have to listen to their inner voices.

K: No, I look back. But not at my own past. There was just a big exhibition at a huge museum in Bonn about everything I did since I started, but I never went. I refused any interview and I will never see the show. Apparently it’s a very beautiful show. Amanda Harlech was the curator. But I will never go. Why should I?

J: Do you get critical of yourself?

K: Perhaps I should be more critical. But you know when I work, 90% of what I’m doing, and sometimes 95%, goes to the garbage can anyway. So I must be vaguely critical, so then what I finally do propose is something I thought about and I think it could be okay.

J: You are a wonder because you so prolific and you are always so productive.

K: I have no choice.

J: Ideas keep you awake at night I bet. I know you said to me you wake up sometimes in the middle of the night, having dreamed of dresses….

K: Yes, it’s very strange. I have my best ideas when I don’t think about having ideas. It’s very strange. It’s like an electronic flash—suddenly! Also, they come during the daytime and in the bathtub. Sometimes I have the best ideas in the bathtub. It’s very strange. But you cannot count on it, you cannot say, ‘Oh, I will have my electronic flash now!’ You have to work at the same time, because when people say they wait for inspiration, well, I don’t believe in that. Inspiration is a nice word. But the French say the appetite comes when you eat. And the ideas come when you work.

J: Do you think women are dressing better now than they were?

K: They look better, so it’s already easier. The average women looks a hundred times better now than even twenty or thirty years ago.

J: Why? Just because there’s so much available?

K: Yes and also the information. We living in a world of the image. So there is more image concern than in the past. In the past, there was a mirror. But now you have your cell phone. So it’s very, very different now. We live in a world of images, so you don’t want to deliver the ugliest image ever.

J: But it also must make it more challenging for you because you really have a smart customer there, one that challenges you too.

J: What do you think gives a woman great style?

K: That’s a question from another era. The socialites and the women who lunch? That’s over. Today there are tons of good and bad examples for the young people. But it’s not about the society lady anymore, and the old standards of society that tell people what fashion is. That’s over. In the past, fashion designers wanted to be social. Now they want to be artists. But not me.

J: Well how do you feel about that?

K: It’s an art, but an applied art. That’s all. There’s nothing bad against it. That’s why I’m not so much for that exhibition about me, because Chanel, Balenciaga, even Dior– none of them had an exhibition during their lifetime, where suddenly they have to go to the museum. It’s very bad because if you think you can rest on your laurels, well, I can tell you the laurels will stop growing.

J: It’s like if you think you’ve arrived, it’s probably time to leave.

K: You’re lucky if you arrive to the next collection!

J: Well it’s amazing that you still put that fire under yourself. You could relax and just take it easy…

K: If not, I would be burned out . And I hate that word! People are lazy and then they think they are burned out. It’s too easy.

K: I’m not old enough to answer that question!

J: Do you ever think of the kind of legacy you’d like to leave?

K: No, no, no . You know, it started with me and it stops with me. So forget about the rest.

J: You’re wonderfully concerned with living in the moment…

Ronnie Hawkins: Thank you for changing my life when you invited me to dance onstage at the 1969 Toronto Pop Festiva… twitter.com/i/web/st…

Canada’s Irina Lazareanu, one of my favourite models of the 2000’s, reflects on the artistry that fed fashion’s Gol… twitter.com/i/web/st…