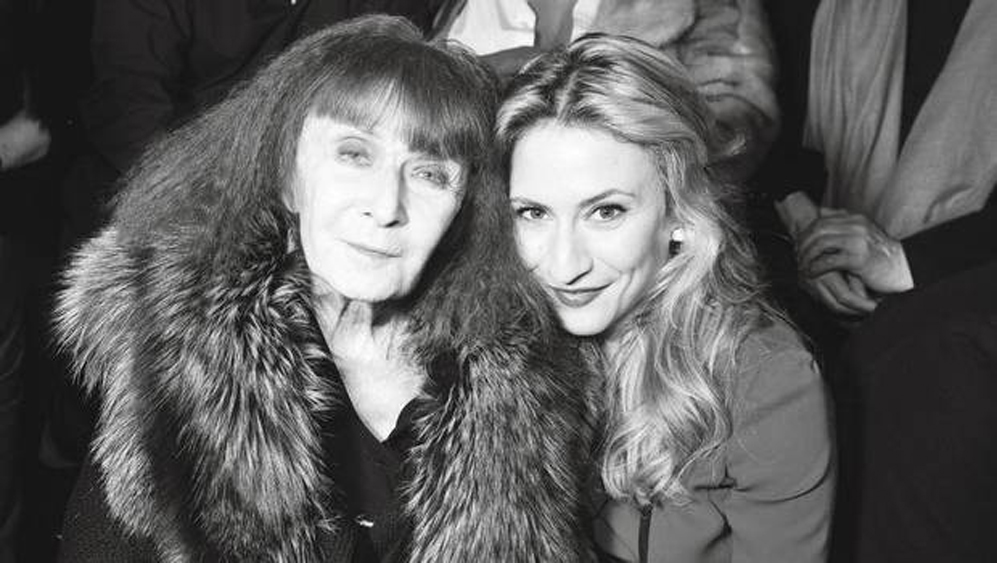 Those with a penchant for Parisian chic will appreciate the fact that Sonia Rykiel, the petite redhead whose spirit and style personified the Left Bank, first set the standard back in the late sixties. Once dubbed the Queen of Knits by Women’s Wear Daily, the legendary French designer, famous for her “poor-boy” sweaters and unconventional seams on the outside of garments, was beloved for her sense of whimsy and artistic approach to easy, feel-good fashion. Once named one of the 10 most elegant women in the world, Rykiel was always adamant about living life on her own terms and grew to represent the liberated woman, both in terms of her lifestyle and her creations. When she was made a Commander of the Order of Arts and Letters in 2012, one of France’s highest cultural honours, Pierre Bergé, co-founder Yves St. Laurent, said that Rykiel was among a rare group of people who understood that fashion wasn’t merely made to satisfy the fantasies of designers, but to speak to women. “And not to speak to idle women, only rich women, but active, everyday women,” he said.

The message of the octogenarian’s knitwear empire is being carried on by Lola Rykiel, her granddaughter, who’s intent on making the Rykiel brand as relevant today as it was in the seventies. From a very young age, 28-year-old Lola witnessed the machinations of the fashion world as a privileged insider. Her grandmother’s brand is in her blood. In an attempt to spread that sensibility to modern North American women, the former dancer moved to New York from Paris a couple of years ago to head up the American PR division of Sonia Rykiel. I caught up with Lola at The Room in Toronto recently to reminisce about her grandmother’s influence, her own keen eye and her new life in New York.

You really have a good eye. How was that developed?

From the beginning. I grew up in this matriarchal family, where everything was about beauty and sensuality. We were always aware of the sensual pleasures, like going to art exhibitions. We were aware of the art my grandmother had in her house or the decorations my mother had in her home. We noticed the way they would take care of themselves and always be so beautiful and put together. And then there was the music we would listen to at home. I was also the most girly girl in this girly world! I started putting on makeup when I was so young and trying on my mom’s shoes and learning everything about prints. I also learned how to watch fashion shows with my mother. We’d go to Galliano and Versace and McQueen. It was really a girls’ world I grew up in, like being in a big boudoir!

And you got to meet a lot of these designers, too. I used to see your grandmother out for dinner with Azzedine Alaia or Jean Paul Gaultier at Brasserie Lipp in St. Germain.

Yes, my grandmother was and still is very friendly with many designers. You don’t realize it’s not normal until you leave that world.

Growing up, did you feel that you were being groomed to work in the fashion business?

It’s funny because my mother and grandmother were always saying that, despite the idea of one day continuing the family business, the more important thing was having the spirit of an independent woman. That’s definitely the legacy that my grandmother wants to leave: The idea that you are your own person and you’re going to do your own thing. My grandmother is a very big feminist. So I grew up believing I could do anything I wanted. I wasn’t limited by being a woman, because I saw my grandmother do so much. And there was always the feeling that you have to do whatever makes you happy. I wanted to be a dancer because it was about finding beauty, finding harmony with music. I already had all those things within my family, but I wanted them from the outside world, too.

What went through your mind as a young girl sitting at all those wonderful shows that your grandmother used to stage? I wonder what you thought of the fashion world – the characters are so much larger than life! Were there any aspects that you were intimidated by or that you were warned about?

No. I think that for me, the unnaturalness of fashion was natural. And my family is very grounded. This extravagant thing was just part of how we grew up. For me, before anything, it was fun. I wasn’t even two and my mother put me on the runway to model the Rykiel children’s line!

I remember all those sweet little girls coming down the runway!

Yes, I loved it. At the time, the rooms where we showed were so much bigger and there were all those flashes. It was very dark and the music was so loud. I remember my mother pushing me out on the runway, looking back and her saying, ‘Go, go!’ I remember loving how it felt, the adrenalin of it.

The kind of knitwear that your grandmother introduced has become an ageless kind of style – it has cross-generational appeal that reflects your family’s sensibility. What is the secret to that type of ageless dressing? What makes something right for any age?

Those are very good questions. It’s not so much about quality or the brand. I think it’s a personal attachment. Why would you always favour those shoes or certain trousers and you wear them all season and until those pieces fall apart? Because when you look at yourself in the mirror when you wear that, you feel good. I think that’s what that knit culture that my grandmother started is really all about: feeling good. A knit sweater or knit dress is something you feel warm in, it clings to your skin, so you feel sexy, and it makes you look good and you’re very comfortable. It’s not like wearing something contrived, like a corset!

What would you say was the most important lesson that your grandmother taught you?

She told me there are two things that matter when you are a woman. One thing is the culture. And the second is attitude. So it’s not about how you look. It’s the attitude and the culture: when you go to museums, when you read books, when you go to the movies or you go see a dance performance and you learn things about the world around you. That’s how you become aware. And that is very important in my family, especially when it comes to appreciating the arts.

You write a column for Harper’s Bazaar about looking for love. Tell me about that.

It’s about my experience being a French girl in New York and the different experiences I have with the guys I meet and how I feel and all about this modern world. It a mixture between the romanticism and the technology [of today].

Could you give us an idea about the attitude toward love in America compared to the attitude about love in France?

I could go on forever! For the French, the more complicated love is, the better. Because they’re more romantic. There’s more passion. The more obstacles, the more interesting it’s going to be! Americans are much more pragmatic. Does it suit my life? Does it suit my type? That sort of thing.

And now you’re also helping to translate the Rykiel brand for Americans.

What I love the most in New York is meeting people who tell me stories about my grandmother and talk to me about what she represented for them – the kind of impact she had on their lives and how she helped emancipate them as women. These women come to me and sometimes hold my hands and have tears in their eyes and say, “You have to understand what your grandmother did for my life!” For me, it’s wonderful.