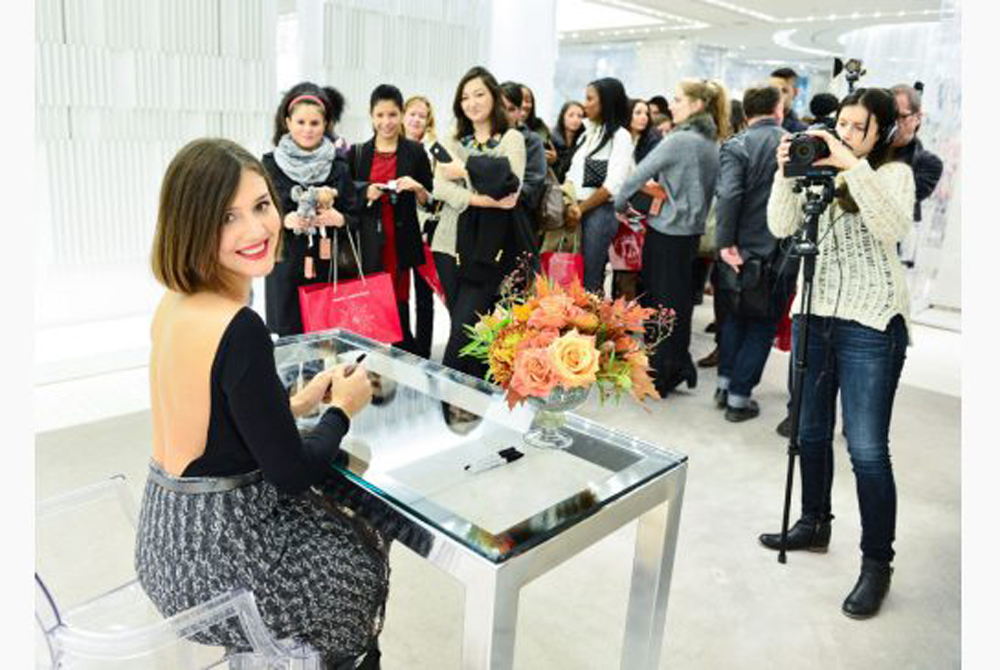 Sometimes, there really is no place like home. That was a lesson that Margherita Missoni learned not that long ago, when she finally forsook her thespian dreams and decided that a gig with her family’s legendary fashion house might not be such a bad option after all. The 29-year-old heiress, who married Edmonton-born race car driver Eugenio Amos in a sumptuous bucolic ceremony this past summer, has long been considered one of fashion’s hottest “It Girls”—a style savvy intellectual (she studied philosophy at Columbia University) who’s profound beauty, brains, and rebel spirit have made her the perfect icon for the legendary Missoni brand. The family-run Italian fashion house, famous for it’s wildly patterned, colourful knitwear, was started by Margherita’s grandparents in 1953. Today, Margherita heads up the accessories division of Missoni, and has partnered with Holt Renfrew in creating small toy bears and elephants, which are being sold this holiday season to benefit the OrphanAid Africa programme—a charity close to Margherita’s heart. I caught up with Margherita Missoni when she was in Toronto recently to talk about her toys, and the personal journey that brought her back to her roots.

Jeanne: For little kids, these small toys are like accessories. My youngest daughter had a little stuffed dog that she always carried around under her arm… It’s wonderful to think that these objects you’ve created may hold a special place in a kid’s heart like that.

Margherita: Oh I hope so. Like today, people come to me and say, “I have a Missoni sweater that I’ve had for twenty years and it still looks great!” I hope to find someone in twenty years who tells me, “I still have my Missoni elephant!”

J: You also start to train a child’s eye for great design—great colour, great fabrication… That’s an interesting thing too, hooking these future fashionistas in a way.

M: You get inspired and you learn from everything that surrounds you. I think that was the biggest luxury I had as a child growing up in such an open and diverse environment full of creative people who wouldn’t follow a set path. And so you think that everything is possible, and there’s no wrong or right in aesthetic. You see beautiful things and you appreciate them.

J: Being exposed to so much growing up really helped made you fearless, because you really thought outside of the box to begin with. But was there ever a time when you were reluctant to take so many chances?

M: When I was around seven, eight, nine years old, my parents split up. And I wanted to be different from them. I wanted to have a structure and rules. So I became a very religious catholic, which my parents weren’t. I was born as catholic girl, but they weren’t practicing. So I started going to church and only wearing navy and white (laughs) which was shocking to my family, but they let me do it. And then eventually, I grew out of it

J: (Laughs) Too boring I guess! But I think every thing you do along the way leaves you with something, teaches you something…

M: Yeah, I still have a passion for navy and white! (laughs)

J: You got married this past summer. Was that your nod to old-fashioned values? A lot of people are opting not to necessarily go that route these days.

M: Nowadays, not everybody in my generation understands the concept of family. People just suddenly have children. And I don’t necessarily mean that you need to get married to create that little world that’s your family, but certain gestures (like marriage) can be meaningful. That’s what I think my generation has lost a little bit, but it’s important. I feel very lucky to have had such a close-knit family. It’s like having a protective net that you can always fall on and bounce back up. There’s no judgment and you never fall and hurt yourself.

J: But also it must have been a little bit daunting growing up as a Missoni, because it’s a big name to live up to. Everybody knows it, and what it stands for. There’s such a level of aesthetic and quality and fame associated with the name. Was that ever daunting for you?

M: For sure. It’s hard when you’re a teenager and you’re growing up and you haven’t quite understood who you are as a person, as a single being, and when you come from such a close-knit family and where the whole family is involved in the business and it’s all one big knot. It’s hard to understand where your place is outside of that. You wonder if you even exist as an individual, or if you’re only a branch of that big tree. I needed to get away, and I did. I moved to New York and I studied philosophy and then I studied acting. And my family always let me do that. which was great. So my going back home was a natural path. The moment that I felt more complete and more fulfilled, I just chose to go back there. You’re ready to make many more compromises when it’s a choice.

J: Have you forsaken your aspirations of acting and the theatre? I know it was such a love for you.

M: It was. I still love theatre and acting. But I also like to be in control, and I don’t really like to be directed (laughs). And so if I go back to that business, I’ll probably be an executive producer or something.

J: It’s interesting how you found your way back home. There are so many great traditions about Missoni, with it being so rooted in the past, but also it’s a very forward thinking brand. Where would you like to see it go?

M: I would like for the brand to always have those key aspects that were important to my grandparents, and that’s involves passion, the work of artisans, a certain level of quality…. It’s also about happiness and colour and comfort, and about being ahead of fashion. That’s something we should always keep in mind . When my grandparents did their first knitwear with zigzags, it wasn’t something pleasant to the eye. It was something that would have to grow on people, and to do that, we had to have…still have to have… a very strong company that can support experimentation. To keep that in a family business is not easy, so we have to find a way to keep it family-owned, but with a financial strength to be fashion forward. That’s my goal.

J: It’s always about being in touch with the zeitgeist, the way people really are feeling and keeping in tune with that.

J: What’s so wonderful about the ‘l’air du temps’ right now is the fact that people want colour. And that’s something that the Missoni brand has always stood for. What do you think it is saying about society, that we have this craving for colour now?

M: We having a craving for happiness again. We have a craving for being a bit careless… It’s such a heavy moment in our history, people want to escape. And that’s what’s good about fashion. We are here to make people dream and to let them think that there is actually another possibility and they should fight for that.