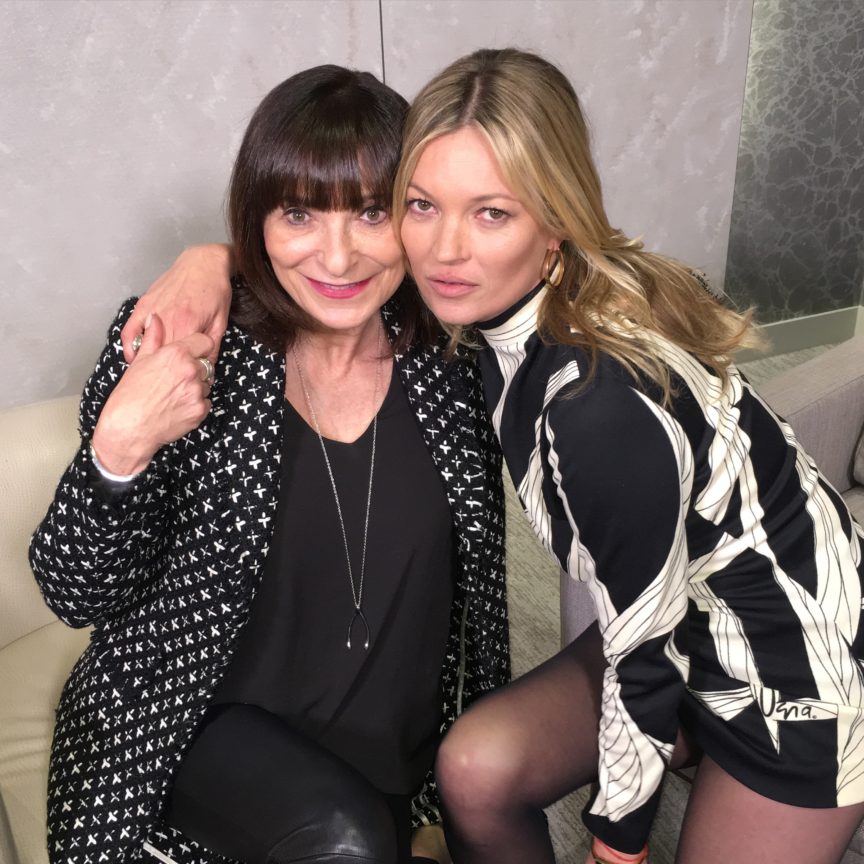 Arguably the most iconic, influential and controversial model of her time, Britain’s Kate Moss was still a schoolgirl from suburban Croydon when she first auditioned for designer John Galliano at the tender age of 15. The year was 1989, and no one suspected that the enigmatic, 5’7”, fresh-faced beauty would soon be turning the fashion world on its ear with her unconventional, waif-like charm and one day, become a muse to such game-changing designers as the late Alexander McQueen. Moss, with her irreverent nature and fun-loving personality, was discovered while she was traveling with her father at New York’s JFK Airport, by a model agency owner. Her meteoric rise to the top was fuelled by a shocking lingerie shoot she did with the late, model-turned-photographer Corinne Day for British Vogue in 1993. Day, who’d introduced a gritty, documentary-style feel to fashion photography, ruffled more than a few feathers with the way she portrayed Kate’s vulnerability and started tongues wagging about the evils of fashion’s new ‘heroin chic’ trend. But Kate soldiered on, survived several other bouts of controversy, and by 2012, was named the 2nd highest paid model on the planet, after Gisele Bundchen.

Today, at 42, Kate is still in much-in-demand for plum assignments, and graced the cover of June’s Vogue Italia with her 13-year-old daughter (with ex-partner Jefferson Hack). The legendary model has also been named the new face of Decorte, an established luxury Japanese skincare brand that recently had its North American launch at Sak’s Fifth Avenue in Toronto. I sat down with the lovely and down-to-earth Kate Moss for an exclusive chat about her strong work ethic, her down-to-earth nature, and what she ultimately hopes to teach her young teenage daughter.

JEANNE: I remember the first time I met you. It was 1993 and you were 19 and your star was rising fast. We were at a shoot at Francesco Scavullo’s New York studio for the cover of Cosmopolitan magazine. But you seemed to be such an unlikely subject—so waifish in your jeans and sneakers and shrunken little sweater….

KATE: It’s so weird isn’t it? It feels like a lifetime ago….

J: They were putting you in a sexy Victor Alfaro outfit. And it was frustrating because the stylist Sean Byrnes was trying to give you a cleavage, with no luck!

K: And (make-up artist) François Nars was giving me a cleavage!

J: And then Scavullo had a meltdown and kicked our crew out!

K: I was just talking about that! We were talking about contouring… I was watching Kylie Jenner’s own makeup look because my daughter’s obsessed, and she was saying, ‘I can’t believe how much make up they wear!’ So I started talking about the drag queens and how they used to contour with make-up and make themselves look like women. It’s kind of the same kind of thing now, with how the girls try to recreate their faces and do this the whole contouring thing…. But François Nars did that to me when I was working with Scavullo. That was the only Cosmo cover I did.

J: And the Alfaro outfit never did work out and you ended up wearing a Betsey Johnson dress instead…

K: Yeah, it was purple. I remember that shoot, because I was like, ‘Oh my god…. It’s Francesco Scavullo!’

J: I just remember your distinctive personal style. You came off like this little girl in those Converse sneakers and that wee sweater that you told me was a children’s sweater you’d picked up at a Goodwill store…. And I thought, ‘Oh wow, this is a new kind of cool!’

K: I was like a grunge, waif thing from South London. And they made me into a Puerto Rican chica! It was so good….

J: You’ve always seemed to have a strong sense of yourself, a very definite point of view. But I know there may have been a lot of insecurity or certainly shyness there…

J: You might have appeared a little shy, but you really seemed solid in terms of who you knew you were, or so it appeared to me as someone who was covering that world.

K: I think I just felt really lucky that I wasn’t in Croydon. So I thought that even if everything goes horribly wrong, I’m not losing anything. It was like, ‘Even if I don’t end up working, I’m still having fun and I’m doing something and I’m seeing the world!’ I wasn’t massively ambitious but I did always want to do the best I could do. So I was never lazy at work or about getting jobs, but I wasn’t bothered if I didn’t get them either really. I was just always having fun.

J: You certainly never had any attitude either. Every photographer I’ve ever interviewed about you, every designer who’s looked at you as a muse, every editor…. they all just love working with Kate. It speaks volumes about your professionalism and the way you see the business.

K: I mean I get that it’s work and I want to get the picture. And I’m a perfectionist in a way. I would never leave a job at five because that’s the time I can leave. I stay to make sure that it’s perfect because I want to do the best job really.

J: Being the face of a big international brand, like Decorte, sounds like a weighty thing. There’s a lot of responsibility in that isn’t there?

K: No, it’s great! And it’s a brand that I really believe in. And because it’s new to North America, it’s exciting to be able to launch it here, or in places where they’ve never heard of it. It’s a challenge…

J: Is talking about something like skincare and the way we feel about ourselves as women as we creep up there in age something that really resonates with you?

K: Yeah… I mean I now use night cream, and I never did! There are things that I never use to even think about that I now realize are part of life. You want to take care of what you’ve got….

J: Feeling comfortable in your own skin as well is something that’s so important. How long did it take you to do that?

K: I’ve always felt comfortable in my own skin really. I always knew who I was, so I didn’t really try and be anybody else. And I think that’s probably half the reason I still work.

J: When we think back to those old glory days of fashion, when the supermodels ruled the runways—almost a golden age—how nostalgic do you get?

K: I was just saying, ‘Those were the days weren’t they?!’ It was so much fun!

J: What about now? Still as much fun?

K: Yeah, I still have fun when I do shoots. I don’t do fashion shows, obviously, because the last time I went to a fashion show, I asked for a glass of champagne and they didn’t have any!

K: But it’s just a completely different world now. The girls get up and go swimming at six in the morning… but actually I don’t really know what it’s like because I have done the shows in a while. But I think we were really lucky to have been there when it was so exciting.

J: But to still be working so actively as you are, and just being signed to be the face of this brand… well, that must give you a kind of a lift.

K: Every season, I’m like, ‘Who knows if I’m going to get another job?! But I’ve had a really good run…’ And then people start calling, and I’m like, ‘Wow! I’ve still got it!’
I’m always thinking, ‘My goodness, I got booked again!’ So I am really happy to still be working.

J: It’s wonderful to think that you’ve managed to maintain that humility when you’ve been lionized to such a degree, really put on this major pedestal, for better or worse.

K: I don’t really listen to all that.

J: What about your idea of beauty? How has that changed over the years?

J: You recently posed for the cover of Vogue Italia with your 13-year-old daughter Lila Grace, and I know you have a very close relationship with her. What would you say is the most precious lesson that you hope to teach her?

K: To be yourself and not to fit in with the pack. And I think she’s at that! She was kind of born with that. So I don’t really worry about her in that way.

J: I’ve heard you say that she doesn’t really want to be a model.

K: Yet! She’ll come with me to work because she thinks it’s funny that we’re working together, and she really shows me up in front of everyone. So she enjoys that. But who knows? She’s only little. She’s only thirteen.

J: I always told my daughters never to follow in my footsteps. I think that’s a good rule of thumb.