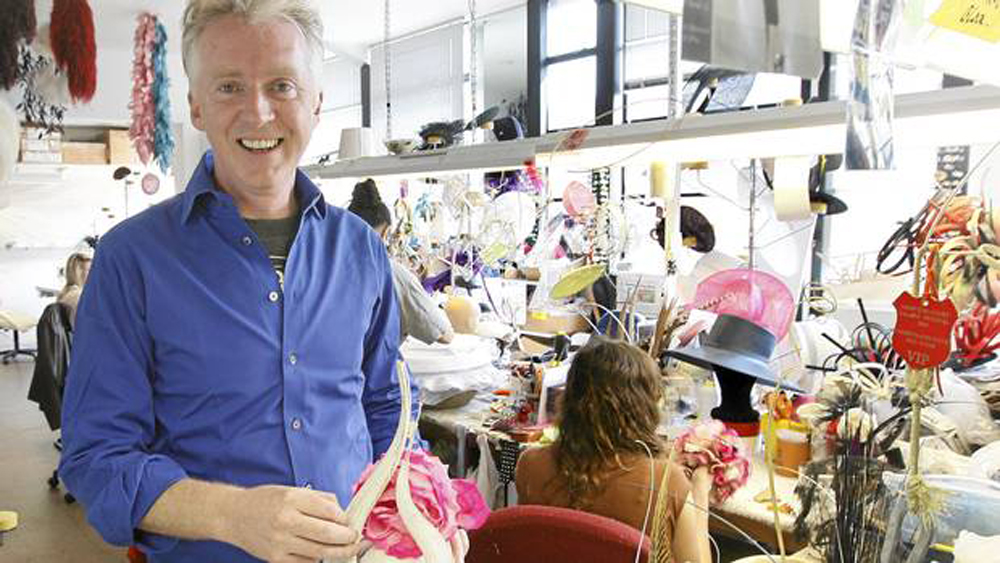 The impending royal wedding will be a heady affair – and no one’s more aware of that than Irish-born Philip Treacy, commissioned to create the headwear for the royal wedding party.

One of Europe’s top hat makers since his discovery by the late fashion editor Isabella Blow in the 1990s, Mr. Treacy is a long-time favourite of Camilla Parker Bowles, who wore one of his hats for her 2005 wedding to Prince Charles; he has also made several toppers for Kate Middleton in the past.

More related to this story

Although the future princess will likely wear a tiara during the wedding ceremony on April 29, she could well cap off her reception outfit with one of Mr. Treacy’s dramatic little fascinators.

During a recent interview in his colourful London studio, where a tiny team was busily at work on some of the fantastical headpieces that will surface at Westminster Abbey, the designer was keeping his creative cards (and his client list) close to his chest, saying only that it’s “fun for us to have a queen, two princesses and a duchess in the same day.” But he did promise full-on “glamour and excitement.”

You have managed, almost single-handedly, to revitalize the hat. And you’ve worked with numerous celebrities in the past. The royal wedding, though, is in a league of its own. Have you felt any extra pressure?

Hats are the epitome of Englishness and a royal wedding is the penultimate moment for a hat designer. I’m Irish, but I am a royalist and I believe in fantasy. Royalty is completely different than celebrity. Royalty has a magic all its own. You read in the newspaper that 70 per cent of the population dreams about meeting the Queen. They may want to meet Madonna too, but they dream about meeting the Queen – and the Queen is among the ultimate hat wearers in the world.

Because image is so important to the Royal Family, is it hard dealing with them?

Of course. It’s show business. But, basically, they are the nicest people.

Do they always know what they want?

No. It involves a kind of trust thing. Fortunately, I’ve worked with these people for years and basically we all want the same things: They want to look good, I want them to look good and I want everyone to be happy.

Do you feel that one has to have a particular attitude to pull off a certain type of hat?

No, absolutely not. There is no attitude required. The hat brings the attitude. And when people try on a hat they like, it is a bit of fun. It makes them laugh. You don’t laugh when you put on a pair of shoes, but you do with a hat.

In addition to hats, you’re also known for your headpieces or fascinators, which Kate Middleton has popularized to such a great degree lately.

Who? (Laughs.) Well, she has been here with us and she is more beautiful in real life than she is in photographs. And she’s a lovely person. England will benefit from her.

So what is she going to be wearing on April 29?

But what kinds of headwear will we be seeing at the wedding? Extremely colourful? Is it going to be all about feathers? Flowers?

It will be interesting. Let’s just say that people will be expressing their excitement [over]the royal wedding on their heads. [The key words]are glamour and excitement.

There is a lot of activity in here today.

Yesterday, [my assistant]said to me, “It’s a lot like Alice in Wonderland here!” And I said, “Yes, isn’t it fun for us to have a queen, two princesses and a duchess in the same day?” We just want to make everybody look the best they can, whether they’re a queen or not.

How does it make you feel to know that the eyes of the world will be on your hats?

Well, I won’t be sitting back and going, “Aren’t I fantastic!” For me, it’s just good for hats. When I started out as a student in London, my other classmates gave me the impression that hats were for old ladies. But hats will always be around, and hats are the ultimate glamour accessories. My aim is to change people’s perceptions of what a hat can look like in the 21st century.