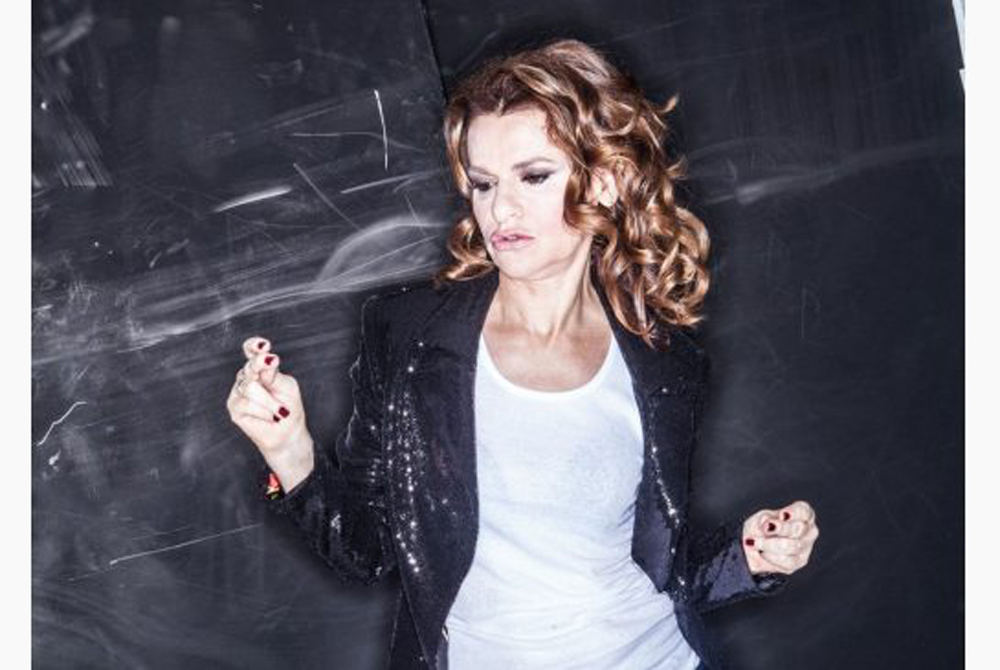 Brash, irreverent, oddly beautiful, and outrageously hilarious, Sandra Bernhard has been tickling funny bones for decades with her astute insights and unbridled chutzpah. The Flint, Michigan native moved to LA at the age of 19, and went from filing nails at a swish salon to becoming a regular at the Comedy Store. Her first big break came in the early ‘80s, playing an obsessed fan-turned-kidnapper in Martin Scorcese’s King of Comedy. A brilliant stand-up comic, writer, and songstress, Bernhard’s 1988 appearance on the David Letterman show with Madonna is legendary. Throughout the early nineties, Bernhard co-starred in the hit series “Roseanne”, continuing to develop and perform a string of memorable one-woman shows. An advocate of gay rights, with an acerbic analytical eye, Bernard’s latest show is called “I Love Being Me, Don’t You?”, and this Friday, she brings her act to the stage of the Winter Garden Theatre, as part of the Canadian International Comedy Fest. She’ll warm up the night before by hosting the Canadian Music and Broadcast Industry Awards. I spoke to the funny and fashionable 57-year-old on the phone from New York recently, and found her to be in rather fabulous form.

Jeanne Beker: You’re one of those performers that crosses all bounds—from your work in film, on stage, as a comedienne, as a songstress… I remember you doing a great rendition of “Georgia on My Mind” on stage at Massey Hall a few years back.

Sandra Bernhard: Oh wow! Thank you, honey. Yeah. It’s because I’m so steeped in musical history and comedic history. I’m just sort of a sponge of culture, so it makes sense that they would want me to host this special night. And of course I’m delighted that they want me. These days, to be wanted by anybody is always promising! But people are getting lost with so much social media and the Internet. So many people claim to be experts at all these things, but few really are. And unless you’ve really been there, at the graduate level for many years, doing what you do, how can you be good at it really?

JB: You’re right. So many people are casting themselves in these roles of experts via the Internet… But it’s interesting to think that there is still a reverence for the voice of experience, though sometimes I worry about that. Like, where have all the real die-hard experts gone?

SB: I think they’re still around. You know, I have a really good friend, Jim Bessman, who used to be a big writer for Billboard magazine, but they just axed him. And now he’s free floating, but he doesn’t really have an anchor place to write about music. And he’s one of these people who really knows music. To me it’s heart breaking, because I don’t want to read some crappy blog. You know, you go to a portal you find on Twitter, and it’s like going down a rabbit hole! I like it when you knew where you were going. I mean, thank God there’s still the New York Times or the Toronto Star, the papers that matter, that have accessibility…. But these dreamy places where people are supposedly reinventing the wheel… I don’t care about those things. I want to go to my source.

JB: How much do you think comedy has changed over the past decade, with the advent of new media? How has that affected what’s funny?

SB: This is really the million-dollar question. I mean, when you go on Twitter and see literally thousands of people who are saying the same thing in almost the same snarky way… It’s cynicism… like reins free! It’s this weird subculture of faux bitchiness. But the people aren’t even witty or funny! It just seems like everybody behind the veils of twitter and the Internet can be bitchy. And I find it disheartening at best.

JB: In terms of hosting these music awards, is this the kind of thing that you’ve done a lot of?

SB: Well, I just came off hosting the Billboard Awards here in New York a few months ago. Over the years I’ve hosted some fashion awards, like the CFDAs. I’ve jumped around a bit. But I like things that are a little more eclectic than just a straight comedy award show—something that really envelops a lot of different takes on the arts. Then you can go in many different directions. I’ve done a little bit of it. Enough to know how to do it for sure.

JB: And do you know what you’re wearing? The most important question, of course…

SB: I’m actually wearing a dress by this duo here in New York called TOME. It’s very wearable and very comfortable, but very fashion forward. I’m wearing something that they’ve actually made for me.

SB: (laughs) Yeah, I mean you’re on stage, so you don’t want to be a prisoner to some dress or a pair of pants that you can’t move in. I like to mix the best of both worlds, high fashion glamour and comfort. When you watch award shows like the Oscars and the Golden Globes, you see these women arriving on the red carpet, and you’re like “ Wow, you look so out of your realm! Wouldn’t it have been better to just choose something super simple, chic, and beautiful, as opposed to being in a dress that feels like you’re in a foreign country?!” You just can’t move. Some of these girls look totally out of place.

JB: Certainly some realizations come with aging. It’s a matter of being comfortable in your own skin first and foremost, which is something that you have never had a problem with it seems.

SB: I’ve definitely become more comfortable as a person; I’ve gotten to know myself better. But I’ve always been very reverential towards fashion, and have been very lucky to be able to wear a lot of great designers. And when you’re on stage and trying to tell your story, you want to wear something that’s chic, but that also isn’t disruptive from what you’re trying to say. So I think designers have always liked what I’ve done and then they’ve designed around that notion.

JB: Well you certainly have a perfect body for strutting that stuff!

SB: Thank you, honey. I’ve managed to maintain it without too much sacrifice, so that’s the good news.

JB: You’re doing your one-woman show Friday night as part of the comedy festival. What can we expect?

SB: Well it covers a wide variety of topics. Obviously, because I’m a mother now and my daughter’s fourteen, there’s a section about her. But again, it’s not cliché. She has her moments that are challenging, but there’s some funny stuff about her, and then there’s funny stuff about the world at large, and social media, and a little bit of politics, but never in a way where its like, “ Oh God, I’m going to fall of my chair from exhaustion hearing this!” I mean I do some funny stuff about Michelle Obama, coming from more of a women’s fashion-oriented kind of place. And then I’ll open with my songs. Mitch Kaplan, who’s been playing with me for years, put together a band and two of the other two musicians are Toronto-based. So we’ll be using local talent as well.

JB: Do you take yourself more lightly the older you get, or is there more of a sense of gravitas towards the way you see the world?

SB: I think it’s a combination. I think I’ve always been able to take myself kind of lightly, because that’s sort of what my work is about—like the irony in being fabulous and hanging out with this person and that person, but still being able to step back from it and say, “Hey at the end of the day, I’m like everybody else… maybe even funkier than everybody else. Cause this is what I do.” But you can’t live in this place. And if you live in that place, it’s a very lonely place to be. So my work has always been a reflection of dipping into fabulosity, and stepping out of it, back into the real world.

JB: Well I just think you are fabulosity personified. I just can’t believe that baby of yours is fourteen!

SB: You’ll probably see her at my show, running around, helping me sell merchandise and everything. She likes to be behind the scenes, doing the fun stuff.

JB: What do you think she’s learning from life with mom?

SB: I think she actually steps back and observes the whole thing. I don’t think she’s so enamored by it. Because I’m her mother and I’m also the person who tells her to do the things she needs to do in life. I think she gets a little sidetracked. She appreciates other people’s comedy more than mine right now. Hopefully she’ll come back around to it. But we have a lot of fun. I think she knows what’s important in life and that to me, of course, is the best part.

Sandra Bernhard performs in Toronto at the Winter Garden Theatre on Friday night. Go to www.canadiancomedyfest.com for ticket information.