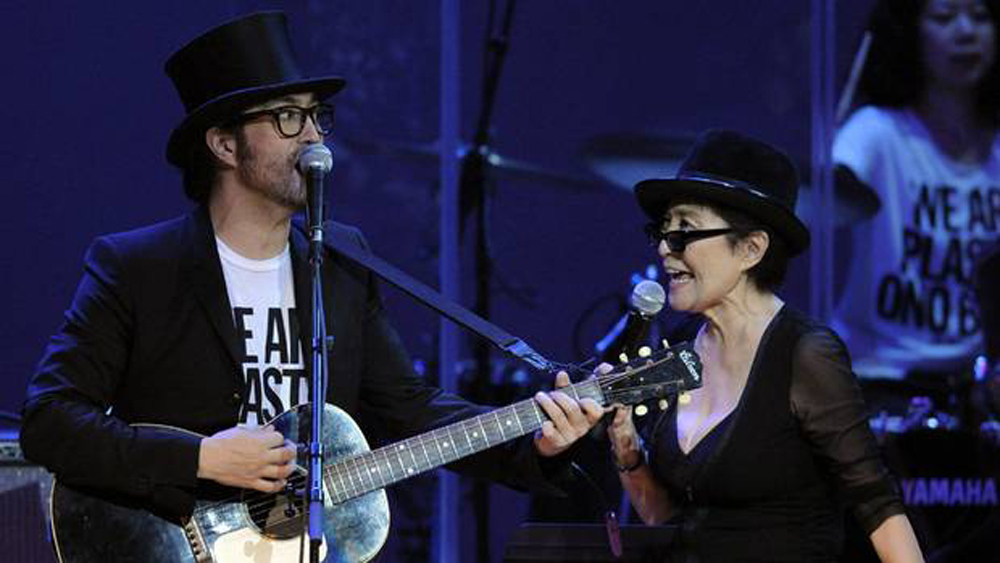 Sean Lennon is no stranger to style circles, so it wasn’t surprising to see him recently at a fashion-magazine launch in Paris, where he was about to perform onstage with a host of other musicians, including his model girlfriend, Charlotte Kemp Muhl, and his close buddy, Montreal supermodel Irina Lazareanu.

I have been running into the 35-year-old son of John Lennon and Yoko Ono on the fashion circuit for years, most memorably during New York Fashion Week, when he often accompanies his avant-garde mom.

He recently produced an album, entitled Between My Head and the Sky, for the 76-year-old Ono. And he’s been busy posing, too. A 50-page coffee-table book, Sean + Kemp by photographer Alex Freund, features the decided It couple in all their stylish, free-spirited splendour. A few nights after he had played a major L.A. concert with the Yoko Ono Plastic Ono Band, Iggy Pop and Lady Gaga, I caught up with Lennon at the Paris brasserie La Fidélité, where he was gearing up to perform a mean rendition of Twist and Shout.

JEANNE BEKER: You’re very prolific in a variety of fields. And I know you have a passion for what you do. But what is it that really hauls you out of bed every morning?

SEAN LENNON: My girlfriend. She tends to kick me in the face. That usually works.

JB: You have people from all these different walks of life playing and collaborating with you – different kinds of musicians and artists, people from the fashion world. Do you think this crisscrossing of cultural influences is really what’s taking over?

SL: I do, in fact. I think society is a reflection of our technology, which is spawning a time of great diversity – and a great deal of attention-deficit disorder. I think that art is reflecting that. Music is a lot of collage work and it’s sort of a mix of different genres and people are collaborating a lot more than they used to in the nineties. It’s kind of an interesting time, but it’s also a strange and disturbing time, I think.

JB: We are seeing a lot of forced optimism in fashion.

SL: Yeah, well, it’s not easy. But I think the world was sort of living in a bubble for a while anyway. And I think – at least in the Western world – that it’s probably good for us to be forced to pay attention and work a little harder.

JB: I remember interviewing you at fashion shows with your mom in New York a million years ago. You were there, just hanging out, observing.

SL: I’ve always liked nice-looking things. I’m not one of those people who thinks that fashion is superficial and that it’s all surface and there’s nothing beneath the surface. I actually think that beauty and nice things and clothing is as valid a way of expressing yourself and who you are as music or painting.

JB: It’s certainly a great way to express oneself. The bowler that you’re wearing, for instance, is quite fabulous.

SL: Thank you. The older I get, the more sartorial I become. And my girlfriend found these turkey feathers up in my country house in upstate New York. There’s a lot of turkey up there.

JB: I’ve seen you in some pretty amazing things. But you’re pretty comfortable in your own skin, aren’t you? Have you always been like that or is that an acquired thing?

SL: I think it’s acquired. I was an awkward teenager. I did see this Karl Lagerfeld documentary on CNN when I was 25. He said that dressing sloppily was okay if you’re a teenager, but you should “present” yourself if you’re over 30. That was when I decided that, by the time I was 30, I would be dressing in suits everyday, which I don’t really adhere to very well, but it was a reflection of my desire to please Karl.

JB: Well, you’ve turned into a fine young man. I know that Karl would approve.