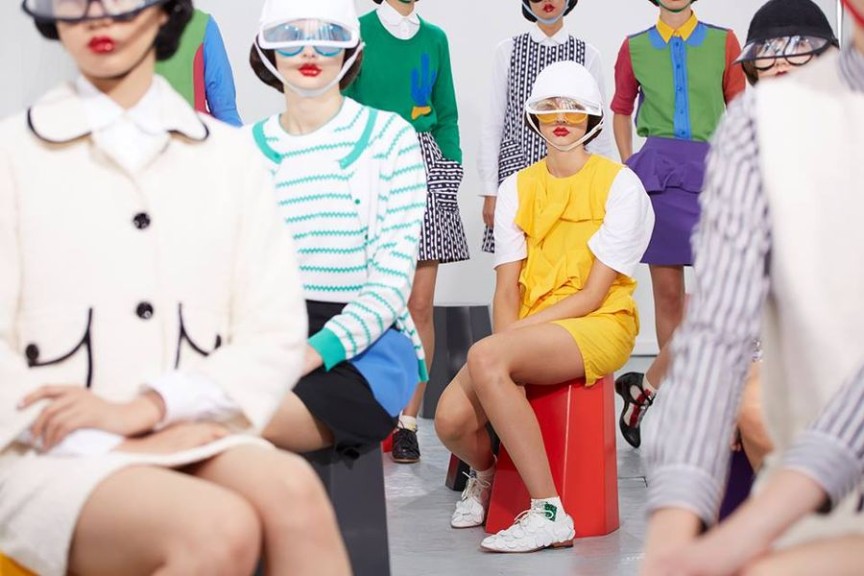 At this frenzied time in fashion, when eclecticism rules supreme, the role wardrobe mix masters play has taken on new gravitas: Designers, editors, and celebrities alike depend on a stylist’s astute eye to bring unique looks together and inspire us all to new sartorial heights. Enter Shirley Kurata, a spirited young Japanese American stylist from L.A. who’s become iconic in style circles for her “mod secretary”, mid-century references, her cinematic sensibility, and her keen attention to detail. Beloved by her ultra cool clients from Lena Dunham and Zooey Deschanel to Beck and Pharrel, her simple, whimsical approach to mixing unexpected, carefully curated pieces is regarded as both cheeky and compelling. Kurata has styled collections for the celebrated, LA-based Rodarte sisters since they first showed over 10 years ago, and regularly styles collections for Danish-born, London-based men’s and womenswear designer Peter Jensen. For his spring 2016 collection, Kurata was cited as Jensen’s muse. I spoke with Shirley Kurata from LA recently about her 60s and 70s esthetic, dubbed “futuristic folky”, her celebration of individuality, and why she thinks people should take more risks.

SHIRLEY: From the age of ten, I wanted to be a fashion designer and I actually went to fashion school for that. But being from LA, I felt like LA wasn’t really the place at that time to start my own line and be a fashion designer. And there was something about working on TV and films and commercials and styling for print and editorials that appealed to me. That world seemed to be a little bit more what I was interested in. So it wasn’t a direct path. I went from studying fashion design to going into costuming on TV and film and learned the ropes that way. Because I became more experienced, I branched off on my own and got into that editorial print and commercial word. That’s where I’m at now. I do some celebrity work, some editorial work, some commercial work… and I like that variety.

J: You had some great styling adventures with the Rodarte sisters and were instrumental in terms of pushing them and celebrating what they were doing. I imagine a great kind of synergy goes on there.

S: They’re very talented, intelligent girls, and they’re pretty clued into what they want to do in terms of the direction of their clothing line. I think because of that, we get along. I understand that. I’m not like one of those usual stylists that will try to direct them into something that they’re not comfortable with. Sometimes there is a power play where a stylist comes in and pushes a direction that a designer might not always be comfortable with. I think that the Rodarte sisters already have that idea of what they want to do. And we all think outside the box. We’re kind of the outsiders of the industry because we came from LA, which didn’t have a big fashion scene. So we were all a little separate from the mainstream world.

J: There’s a sense of playfulness and whimsy and unexpected mixing and matching in your work. You’re style is so distinctive. Is that something that takes a long time to cultivate? Is it hard to stick to your guns and develop a unique style for yourself?

S: I think it just sort of comes naturally. You have something already within that you’re drawn too. And yes you can cultivate that. But there’s also something innate or intuitive about it too. I like try to work with things that I enjoy and work well together. I don’t know if it’s always so deliberate. It just sort of falls into place for me. It’s hard to explain because it’s an abstract thing. A lot of styling is about what your natural aesthetic inclinations are, and working off of that.

J: You’ve got a great love of contemporary design but certainly a wonderful penchant for vintage as well and the way you play with vintage great. In your heart of hearts, what excites you more?

S: I have to say it’s equal. Maybe I’m a little more drawn towards vintage, which I absolutely do love. But things coming out of the collections during fashion week excite me just as much.

J: How good do you think people have become at styling themselves? And what about the risks people take when it comes to mixing it up?

S: I wish people would take risks a little more. I know it’s hard do when people are so prone to criticize you on the Internet or in magazines… So I can understand that caution because it comes to a point where you can only hear so many personal attacks on the way you’re dressed from strangers. And I find that unfortunate because you have to take risks. And I admire the people that want to do that and aren’t so bothered by all the negative comments that might come out of it. Sometimes in the ‘What Was She Thinking?’ section of magazines, I actually like the outfits being criticized! At least it’s fun as opposed to a very safe gown that you’ve seen a million times before.

J: Well the red carpet has, in some ways, watered down individual fashion statements. There’s an air of propriety and good taste that prevails that wasn’t there when I was a kid growing up. What are your feelings about the red carpet?

S: I agree. Like as crazy as that like Björk swan dress was, it was so much Björk’s character that I loved it. And I’m not saying we should all wear a swan dress on the red carpet, but sometimes you need to express something fun. I think people are just too scared to do that now on the red carpet. There are a few people that take the risk and that’s great, but it would be great to see a little more spirit.

J: You’ve done some great work with celebrities. Lena Dunham is cool and seems to be a risk taker. When you work with her, how collaborative is that?

S: With Lena, it’s very collaborative. She’ll send me pictures of things and I’ll send her pictures and we’ll respond to each other’s thoughts. There are certain things that she’ll be really drawn too and I’ll tell her yes or no. Or it kind of goes both ways. And I think it’s great because she’s willing to take some risks and that’s always fun.

J: We’ve been seeing a lot of irreverent, unexpected mixing going on. Take Gucci’s last collection for example. Do you see that as a trend that is just going to keep on growing, with people embracing it more and more, or do you see a nod towards minimalism creeping into the fray?

S: It’s sort of like a yin and yang. I think there’s going to be both—that’s the way the world runs. I love what Gucci’s doing because it’s my world. But I also appreciate the minimalism of Calvin Klein or what Helmut Lang did. Not everyone’s going to be able to pull off a Gucci head to toe ensemble, but then there are people like me that would love to wear it…

J: Well it’s great that we’re living at a time when anything goes. But does that threaten the role of the stylist? If anything goes, why do we need an expert eye to put it together?

S: I wouldn’t say anything goes. There is a limit to what looks good together. I think stylists are needed but I think that there’s room to play around with things. There’s also a need to make sure that it’s done tastefully or appropriately I guess.

J: Well your vision serves as a source of inspiration for many. You were even a muse for Peter Jensen’s recent collection…

S: Yes I was very honoured and flattered especially because his past muses have been women that I’ve been a huge fan of, like (photographer) Cindy Sherman and (actress) Shelley Duvall. It was definitely a great honour to be one of his muses and I was very excited to see what kind of collection he would come up with with me in mind.

J: What did that make you feel like to see all these looks that you inspired come down a runway?

S: It was exciting and I loved it! I’ve always been a big fan of his work and to see a Shirley collection was definitely a big treat for me. It struck me as maybe ‘Shirley-on-the-go’…. but I know it’s always hard to describe your own style. I like to say, ‘If Harold and Maude had a child, maybe she’d be dressed like me.’

J: Were you always confident about your style sense when you were growing up?

S: I went to a school with school uniforms all the way from kindergarten through twelfth grade, so I think when you’re stuck wearing uniforms you want to get out of that and start experimenting with your own outfits. I think that kind of started the path for me.

J: Maybe your feistiness and fearlessness when it comes to style was a rebellion for you in a way. After all, wasn’t there a bit of a repressed feeling to have to wear a uniform every day?

S: Part of it was kind of nice to not have to worry about what to wear every morning. Sometimes you’re half asleep. So I actually didn’t mind that so much, but after a while though, you start thinking that it would be nice to wear something fun and different. There was definitely more of a desire to wear something interesting. But I also loved the aspect of wearing a uniform growing up because I think it’ something you don’t have to worry about.

J: Do you ever project about fashion in the future and the way we’ll be dressing? There was a time when people speculated that we would all embrace a uniform because it would take up less time….