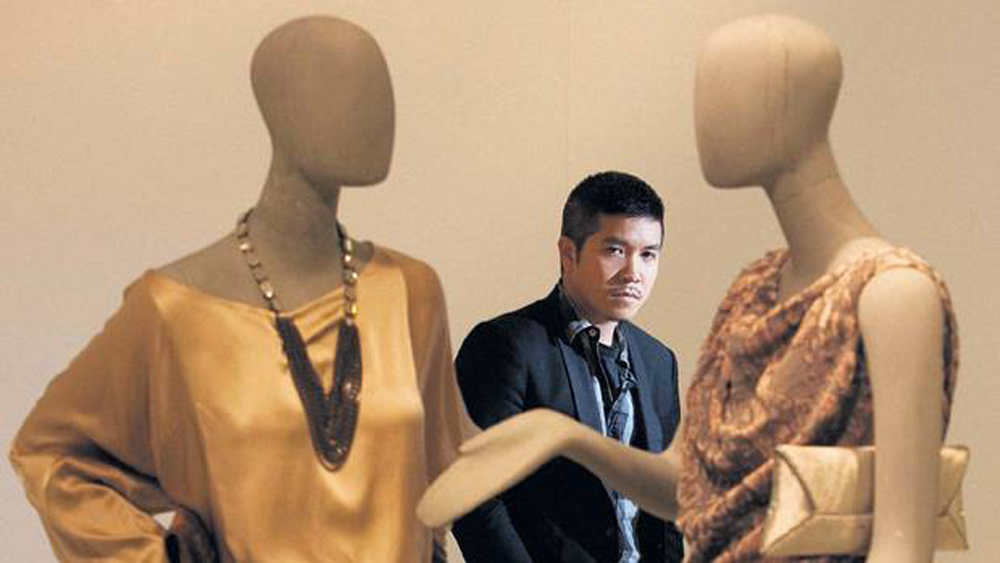 The fashion arena is verging on overload when it comes to ambitious young designers with a point of view and a passion to succeed. But every once in a while, one does manage to break through the din of excess and not only get noticed by those who matter, but woo the world with a sartorial sensibility that’s both arresting and right for the times. Case in point: Thakoon Panichgul, the Thai-born American design dynamo whose star skyrocketed back in August 2008, when Michelle Obama chose to wear a red, black and blue abstract-print kimono dress from the designer’s spring 2009 collection on the night her husband accepted the Democratic presidential nomination.

Panichgul, who graduated from Boston University in 1997 with a business degree, worked as a fashion journalist and then studied design at Parsons in New York, showed promise when he launched his first collection back in 2004. By 2007, he was producing a line for the Gap after Vogue’s Anna Wintour took him under her powerful wing. (You might remember seeing Thakoon in the 2009 Vogue documentary The September Issue.) These days, he is on the vanguard of American fashion, charming contemporary women (including such celebrities as Julianne Moore, Natalie Portman, Demi Moore, Sienna Miller and Sarah Jessica Parker) with his modern, innovative, slightly offbeat approach.

Recently, Panichgul paid a visit to the Room in Toronto, where I spoke with him about culture shock, his creative process and a couple of his very famous admirers.

JEANNE BEKER: You moved from Thailand to Nebraska at the age of 11. Why did your family choose Omaha? How did that happen?

THAKOON PANICHGUL: I have family members who married into the [U.S.]military because of the Vietnam War.

JB: I can’t imagine how difficult it must have been for you to be catapulted into this whole other culture. Were you fluent in English at the time?

TP: I didn’t know a lick of English. I had no friends. And I was coming from Bangkok, which is a huge, huge city and [where]my brother and I were running around by ourselves and knew everyone and were like the life of the party and having fun. And then we get to Omaha and there was really nothing to do. So I think it forced me to kind of dig within myself to survive. But I think that helped foster my creativity.

JB: But why fashion? What was it about that arena that captivated you?

TP: I was always drawn to it. My mom was a seamstress for a very long time – 20 years – for a wool company that made coats. So it was always in the family, but it wasn’t glamorous. It was just a way for her to put food on the table. But I always loved it. And then I started to look at fashion magazines in Omaha. That was the only way to escape. I would go to a newsstand that was 30 minutes away. It was the only newsstand that had international editions of Vogue. And I started to pore over these fashion stories and the work of photographers like Steven Meisel and Patrick Demarchelier. That’s how it began.

JB: Did your family nurture this passion?

TP: They didn’t. It was a quiet kind of fascination that I had. I excelled in business when I was in high school and got a scholarship to go to business school in Boston, and they wanted to push me toward something that was more corporate and saw success in that. I did a lot of art when I was in school as well – it was a hobby. But they didn’t think that fashion or art was anything that I should pursue, so I kept it quiet until I moved to New York.

JB: And then you blossomed.

TP: After college in Boston, I moved to New York because I had a lot of friends there and I knew that was the only place to be. I found a job right away at J.Crew doing production and was then promoted to merchandising. That was when I got the taste for [design] I’d work with the design team and I dreamed of being in their office and looking at the mood boards and finding inspiration and looking at colours. I just really wanted more of it.

JB: So you decided to actively pursue it?

TP: Absolutely. In a way, it was like I had to prove to myself [that I could do it]

JB: You have a degree in business, an understanding of the business world that makes you unique in fashion. That’s the missing ingredient, I think, among a lot of young, passionate designers. They love the artistry, but they don’t know how to focus.

TP: I was also a journalist for a little bit, working at Harper’s Bazaar magazine, and I would go and cover stories about young designers, many of whom would come and go so quickly. They had so much talent, but they didn’t have the means or the know-how to keep it afloat. So part of why I wanted to start my own collection was a) I couldn’t get a job as a designer for anybody else because I didn’t have a background but b) I thought of fashion as a creative outlet but also as a business. At the end of the day, you’re selling clothes. So you have to nurture the business as well as the creative side of it.

JB: One of your great champions is Anna Wintour, whose support has really served you well. Tell me about the kind of power that you feel she honestly has in making or breaking a designer.

TP: Growing up, I looked up to her. I read Vogue all the time. When I first started doing the collection, I just really wanted to tell her about my passion and about the designs that I was doing. From the get-go she responded because she understood, and she paid attention. She’s the kind of person who will follow through with anything that she promises. In this industry, there are a lot of fickle people. And people make promises all the time and don’t really follow through. But she really does. And she really respects young designers because she knows that they’re ultimately going to be the next generation of design stars and she needs to nurture them.

JB: What’s the biggest lesson you have learned from her?

TP: She said in the first meeting in her office to take it slow. It’s so simple, but it’s so true.

JB: Don’t get carried away with things?

JB: The support of Michelle Obama has also been phenomenal for you. How did you feel when she started wearing your clothes?

TP: She has been shopping at a store in Chicago called Ikram for a very long time and she discovered my collection there. That’s how I dress her, basically, through the store. She’s just a breath of fresh air. I think it’s nice in fashion to have somebody who’s so commanding and so powerful and not just an actress or a model: It’s actually the first lady, who has kids and responsibilities and a different kind of standard she has to dress for. It’s really refreshing.

JB: What keeps you passionate about what you do?

It’s that energy that I love. That’s what I feed on.