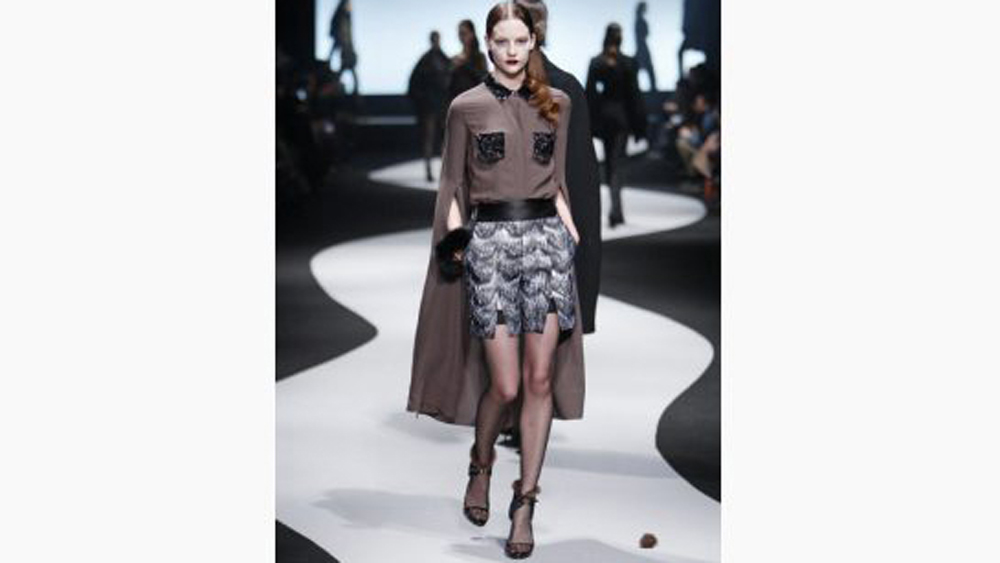 Once upon a time, the fashion that really made the world go ‘round—got people talking and dreaming and just plain excited—was the over-the-top fare that was presented in sensationally theatrically ways, by creative souls that were as much story-tellers as they were dressmakers. 20 years ago, when Dutch duo Viktor Horsting and Rolf Snoeren burst onto the scene, the notion of fashion as art was really bubbling up, and the two friends, who met at design school in Amsterdam, decided to show Paris their version of this blurred new reality. More comfortable in gallery spaces than catwalks, they challenged staid perceptions of clothing by presenting a collection based on reconstruction, layering, and distortion—themes they would continue to toy with for the next two decades. But while Viktor and Rolf’s initial offerings were considered Haute Couture, by 2000, they entered the realm of ready-to-wear, using their creative skills to build a brand that would be synonymous with artistry in fashion, while putting out clothes that could be wearable.

Luckily for these artful designers, commerce is not a dirty word: In 2005, Viktor and Rolf launched their Flower Bomb fragrance with great success, and the following year, they popularized their brand further by doing a collaboration with H&M. In 2008, Renzo Rosso, who owns Diesel Jeans and has an interest in Martin Margiela and D-Squared (among others) partnered with Viktor and Rolf, helping them perfect their art/commerce juggling act with aplomb. While their collections have always been far from pedestrian, with many odd and elaborate garments often a part of the mix, Viktor and Rolf have indeed established themselves as a coveted label for women with a strong sense of themselves. Tilda Swinton was a long-time muse, and now Jessica Chastain has been embraced by the duo, inspiring a fresh and playful new attitude. Viktor and Rolf’s past presentations have become legendary, with an emphasis on bold, witty theatrics. Their visions have been inspired by both bedrooms and ballrooms; they’ve painted their models’ faces completely black and completely red; they’ve used chroma-key techniques to project moving images onto garments; and they’ve featured live performances as part of their shows, with star musicians like Tori Amos and Rufus Wainwright.

This June, a retrospective of Viktor and Rolf’s work, displayed on dolls, will be featured at the ROM as part of the Luminato Festival. And this past week, the designers were in Toronto for a swank reception at The Room, where I had the chance to chat with them about their vision, and fashion’s changing face.

J: You walk a fine line between maintaining artistic integrity and yet making things that women want to wear. Do you feel you’ve have worked hard at trying to meld those two sensibilities?

V: I think at the moment, we’re in a place where we really like to work on something that’s a bit more real. We’re moving away from very theatrical performances in our shows. We’ve done that for a long time, because we loved it. We still love it. But we feel the need to present ready-to-wear really more as ready-to-wear—still with all the signature elements of our style obviously, but really working on the garments. It has always been there, but sometimes, it got overshadowed by the performance of the show. And I think especially for our last collection (fall 2013), we were in the mood to do something that was a bit younger. And probably because it’s our twentieth anniversary this year, instead of wanting to look back, we’re much more in the mood to look towards the future. So that’s why we wanted to do something very young and upbeat and light.

J: Is that something that you have to play into because of the dictates of business, or is this just really a natural evolution?

V: It’s also a feeling we have with the ready-to-wear system in general. With so many designers and so many shows, we feel that the message needs to be more and more concentrated.

J: One of the things that I miss about the old days of fashion is the amazing shows that we saw. But I don’t think it will ever be again like that again. Like you say, there’s a system in place that people have to play into…

V: But don’t you think that part of the drama was also the whole notion of the revelation? The fact that you were seeing something that you had not seen before? A show was really the moment where the collection would be shown to the world. Nowadays it’s different. Backstage is equally as important as the show itself, so all of this is blending into one. People want to know about everything—not just the clothes…they want to know about what is happening backstage, who the models are, who is the designer. The times are just so different now.

J: It’s sort of a shame though, because you two who are the master showmen. You gave us some of fashion’s most memorable moments. How do you feel about it?

R: It’s something that belongs to us, so maybe it will come again.

V: We’re evolving, we’re growing, we’re getting older. It’s not stagnant, so this is where we are at the moment. But I agree with you that one of the reasons why we wanted to be fashion designers in the first place was that fashion had an aura of mystery and that is I think still very important to maintain that in some way.

J: Do you worry about maintaining that aura of mystery at a time when everything’s so public and accessible? With the incredible success of “Flower Bomb”, your brand is pretty out there now…

V: As a matter of fact I think that everything we do is still very exclusive and not that available, so lets say at the moment we’re not worrying too much about being too accessible. And it’s actually great that you mention Flowerbomb because the image that represents Flowerbomb, the woman with the veil, is the perfect icon of how we feel about fashion.

J: Does it become more challenging, the bigger your brand gets, to keep it not only interesting for the people out there, but for yourselves, as a creative team.

R: Somehow, it all gets lighter.

V: Yeah. I wouldn’t say easier, but it’s funny to think that in the beginning we did two collections a year, and we would agonize over every dress and we’d think that it was a lot of work and now, we do so much more, and see that’s possible as well. So I think there’s certain lightheartedness and certain speed to working. Maybe it’s also experience. At a certain point you get into a flow.

J: Because your clothes are often so dramatic, what type of woman do you like to see them on?

V: We like to think that it’s more about what a woman’s mindset is. We call it “mindstyle”. So it’s really about trying to dress a woman who gets it on an intellectual level, who gets the wit.

J: Can you tell us a little bit about your doll exhibit that’s coming to Luminato? What we can expect to see?

V: There will be an installation of our collection of dolls. Basically, every collection we make, we also make a doll that is dressed in one or two iconic looks from the collection. These are not cutesy, sweet dolls. They’re antique Victorian dolls, and they’re all made up to look like the look of the show. So they have the makeup, the hair, and the clothes of the show. They’re wearing couture clothes basically. So yes… Go see it! (laughs)