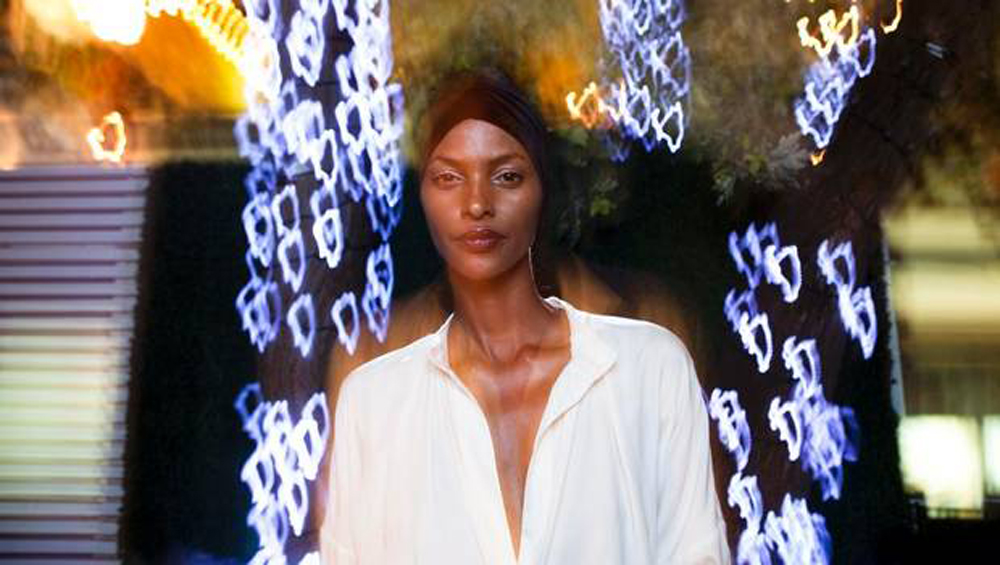 As much as the dark side of fashion’s underbelly has been exposed in recent years, with tales of the pressures of the business putting some players over the edge, other use the industry spotlight as a platform for awareness, and end up shining far brighter, and imparting more inspiration than any glossy style image could ever hope to. Toronto’s Yasmin Warsame is one breathtakingly beautiful example. The veteran Somalian-born high fashion model has not only cultivated a stellar career for herself since immigrating here at the age of 15, via Kenya, Zambia, and London, but she’s also always been adamant about giving back and bringing the notion of true beauty to a much higher, humanitarian ground. The 5’11” Yasmin entered the fashion world somewhat reluctantly at first, due to the fact that she was raised a Muslim, and this was a highly controversial arena to be entrenched in. When I first met her, in the late ‘90s, she told me that she still hadn’t told her family back home about her new work. But, with her haute look, she was just finding her footing back then, and had just a new baby to support. By 2002, she’d conquered Paris, walking the runway for Tom Ford, and shooting for Vogue with legendary photographer. Steven Meisel. Now, almost a decade later, Yasmin is still at the top of her game, yet remains as humble, grounded, and genuine as the day I first met her. We sat on the judging panel for 2 seasons of Canada’s Next Top Model, and I had the opportunity to see the real woman behind the glam supermodel. She never failed to move me with her sensitivity, spirituality, and savvy. Recently, Yasmin hosted a fundraising event at Yorkdale’s new “7 for all Mankind” store, showing off her remarkable frame, and chatting up a cause she’s most passionate about. I talked with her about life beyond fashion, from the spirit of giving, to the true meaning of beauty.

J: Looking good baby! But obviously it’s more than just the jeans that you’re really here to celebrate. There’s a wonderful African charity tie into this. So tell me just a little bit about that, Yasmin.

Y: Its called The African Future (www.theafricanfuture.org) Originally we were focusing more on working with hospitals and equipping them. But ever since the draught, and the famine that has been going on in the Horn of Africa, we’ve been setting up mobile clinics in rural areas all across the boarder. That’s why we need all the funds we can get. But one of the fascinating things about The African Future Organization is that they focus on penetrating places that big organizations are not able to get to within Somalia. And they’ve now what they do is they basically take the refugees that decided to stay in Somalia, and feed them where they want to stay. And then if they also want to get from one camp to another, we give them enough food for them to be able to travel with their family. And if they decide to stay, than we feed them where they are. Most of the people that are affected are farmers. Their forefathers have been farmers for hundreds of years– they don’t really want to desert everything. It’s just the fact that this problem with the weather, as we’ve all been experience all over the world, has happened. They don’t want to leave so we’re trying to help them sustain until something changes, until the weather changes or until at least it rains, until they can get back to their place.

J: You know, from the very first time I met you, I always sensed that you had such a heart, such a generous spirit, such a socially aware consciousness. It’s been an inspiration to me personally…

Y: Thank you. Coming from you that’s sweet

J: But you really touch a lot of people because when you speak, you really speak from the heart. You are aware of the world around you. How do you feel about using your platform as a model in the fashion world, to really reach that kind of higher ground?

Y: Everyday I thank the Lord. I am very, very grateful. I don’t take a minute for granted. And over the years, and all the interviews that we’ve done together you and I, one thing has always been consistent: the awareness that it could have been me. I mean I could easily have been just one of those kids, my child could have just easily been one of those kids there. I am very aware of the opportunities that I have, very aware of the opportunities that are available to me. And so therefore if I am one of the voices from that small village that I was born in Somalia—just one little voice—if I could be that, than I would.

J: I know that you get a lot of joy creatively from your work as a model in the industry, but how does it compare to the joy that you get from doing work for the world in this important way?

Y: I think one of the greatest things in life, if we’re able to, is to give. Even though you put a smile on the other person’s face, what it does for you is priceless. So that feeling itself is amazing and that is where I’m coming from. Giving is a pleasure and speaking for people who right now might not have voices is a wonderful feeling.

J: How have your attitudes towards the business of modeling and the whole fashion industry in general changed over the years since you first set foot in it?

Y: I think we both watched it change. I think it’s become work. It’s a little less fun and more work I think. Which is a little contradictory because fashion is about dressing up: We should be laughing. We should be having fun. We should be having a good time. But it is work, as you know. But my perception of the industry still remains the same, believe it or not. I still think it’s a pool of the most incredible personalities on the planet, the talent, um…

Y: Egos! (Laughs) How could you forget that? Egos, definitely. But I think deep down, there’s an artist within each person. And they express that in their own way. And I’m very grateful to be even exposed to that, to be able to know these great designers and to work with them and to be around these great personalities. The business is larger than life itself.

J: And it’s incredible but you’re still busier than ever

Y: I know! Can you believe it?

J: What do you attribute that to? Seriously, the older you get the better you get, which is such a blessing.

Y: Thank you, that’s sweet. Yeah, you know we will keep going. But I’m still myself… I’m surprised, but it’s a blessing. As far as my views, my values—I attribute that to my mom and dad. And growing up in Somalia. We’re blessed with that, so fortunately I don’t have to do much work on that area!

J: When I first met you 12 years ago, you had a tiny little baby. Now your kid has really grown up… How does that make you feel? To juggle as much as you’ve juggled as a single working mom, because it couldn’t have been easy sometimes. I’m sure you were torn in two. But so far so good?

Y: Absolutely, so far so good. I look at him and everyday. I’m so blessed and I have so much admiration for the young man that he’s turned into. And he’s a very conscience individual, very sensitive and very aware of everything that’s happening within the world and within ourselves and he’s my voice of reason at times—many times actually. I’m just so proud that he chooses to come into life through me. He has such an amazing soul.

J: How do you think he perceives your work as, not only as a spokeswoman for this great global charity, but even in the fashion business—to see his mom as this glamazon working in the trenches of the fashion world. What do you think he’s thinking about this?

Y: He’s twelve years old, so right now, he’s not that interested in my modeling. Just not into it. But he is a very conscience, very aware young child, so he does understand some of the work that I do. He’s definitely proud of me. He’s told me a few times. I’m very, very lucky to have him in my life.

J: And finally Yasmin, how has your idea of beauty changed over the years, as you’ve blossomed into the amazing woman that you are? What do you think really great beauty is comprised of at this point?

Y: Great beauty? That light within. Turn it on and shine it. I mean of course we women want to dress up, and we want to look good, but I think it’s time we moved from thinking that beauty is something that you purchase in a store versus something that you should have within, that you should carry with you every single day and everywhere you go. I think that’s the way that I’m leaning as I get older, as I grow, as I experience life, as my perceptions change. I think beauty is definitely one of the greatest gifts God gave us, and it’s within each and every one of us. And it’s right there for you to dip into that pool anytime you want. That’s kind of where I’m at.