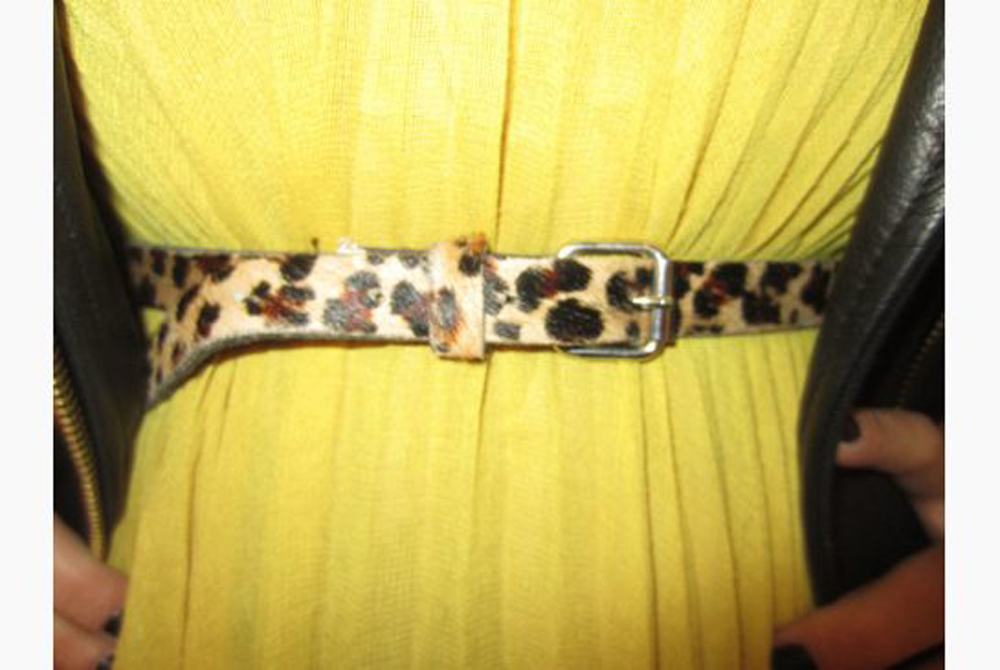 I work in an image-obsessed business where those in front of the camera often take great pains to try and always look their best. We have to. People expect it. Besides, our livelihoods depend on it. And there are certainly a lot of fashionable people who work in the television spotlight. But over the years, I’ve met a handful of uber stylish people in TV’s trenches who work exclusively behind the scenes, and who embrace fashion wholeheartedly simply because they love it—not because they’re compelled to dress up for their jobs. Meet Caleigh Rykiss, a stunning 28-year-old segment producer on CTV’s Etalk, who inspires her co-workers daily with her eclectic repertoire of funky outfits, and whose fearlessness when it comes to fashion has brought her much personal joy. “Growing up, I was always interested in fashion,” shares Rykiss. “My mom is very glamourous and style savvy, so I was constantly surrounded by beautiful clothes and make-up. I remember always having ideas about what I wanted to wear, but I didn’t really fall in love with style until I found the freedom from caring about what everyone else thought,” she says. Rykiss claims that when you dress for other people, it can come off looking contrived. Besides, she says it can be exhausting. “Now I dress without fear, without limits, without rules,” she proudly states. There’s only one rule she lives by: Never to wear drop-crotch pants in front of her boyfriend. “He’s pretty accepting of my style eccentricities, but that’s his only request!” she laughs.

Rykiss, who was born and raised in Winnipeg, has lived in Toronto for the past decade, and has been with Etalk almost 8 years ago, starting out an eager intern who, as she confides, “basically refused to leave”. Her passion for her job is paralleled only by her passion for sartorial self-expression. “I like to indulge in all parts of my personality, dressing like a different version of myself every day,” she tells me. True enough, she’s in skinny jeans, a funky T-shirt, and a bandana on her head one day, and then shows up looking like Star Trek’s Princess Leia the next. The only constant is that her make-up is always impeccable, and changes with each different outfit. “My less than extensive budget also plays a role,” explains Rykiss. “I enjoy the challenge of taking my existing closet and turning it into something fresh with each wear. Just changing the smallest detail—even lipstick colour—can make an ensemble look completely different,” she says.

Rykiss loves shopping her grandmother’s closet. “She’s much cooler than me,” she admits. And she swears by Zara, for both clothes and accessories, though she cites Chanel, Alexander Wang, and Stella McCartney as her favourite design labels. She also has a penchant for vintage dressing , but realizes that having the time to sift through vintage shops to find those hidden gems is a luxury. “It also requires a calm state of mind,” she maintains. “There’s no better way to spend a Sunday in the fall, but I’m mostly relegated to quicker shopping trips. That’s given me a largely contemporary wardrobe with some vintage accents,” she says.

The focus and feistiness that Rykiss possesses when it comes to dressing up is a big part of who she is, and it’s an attitude that’s evident in her approach to fitness as well. She used to be a competitive boxer, and while she doesn’t fight anymore, she says she still trains as intensely as she would if she had a match tomorrow—at least 6 days a week! A self-admitted hair extension enthusiast, Rykiss religiously went to Chiggy’s Touch, near Yorkville, for years, until the owner packed up and moved to Barrie. Rykiss is still auditioning for a replacement. In the meantime, she has a blast letting things get to her head in the form of turbans—one of her signature looks. She wasn’t wearing one when we worked together earlier this week, shooting a segment at the Joe Fresh headquarters, but the outfit she wore definitely smacked of Rykiss’s own brand of funky chic. The “dress” she sported was actually a BCBG maxi skirt, that she decided to hike up and belt. Her jacket was from Zara, and she bought her boots four years ago at TopShop in London. She loves accenting with animal prints, but doesn’t remember where she picked up the little leopard belt she was wearing, though she says it old, and cheap. And her gold citrine and diamond ring was her grandmother’s. “It was given to her by an ex-boyfriend. She offered it to me after they broke up,” she shares, and then adds, “Oops. I hope he’s not reading this!”

Define your personal style in 3 words.

I don’t know if I believe in faux pas per say… I appreciate anyone who has an idea and commits to it – even if it doesn’t look “good”. Having said that, I do believe that dresses should never be worn with pants underneath, and there is no excuse for wearing pants that are too short.

There are so many risk takers over the years that I admire so much: Diane Keaton. Cher. Sarah Jessica Parker (naturally). These days, Rihanna has been blowing my mind. You literally never know what you’re going to get. Soft and glam. Hard and edgy. Sporty. Flower child. Long hair. Short hair. Red. Black. Curly. Straight. She’s obviously the most gorgeous, which doesn’t hurt, but she doesn’t pick her wardrobe based on what is THE MOST FLATTERING. She picks it based on a mood she wants to convey. I admire that. I aspire to that.

Where do you get your style inspiration?

Everywhere – literally. Most recent sources of inspiration: The Jungle Book, Justin Bieber, Axyl Rose, private school uniforms, my boyfriend’s closet. I pull little bits from everywhere I go and everyone I see. The trick for me is to take a theme I love and “Cal-ify” it.

If you’re truly confident in your fashion choice, everyone else will believe you.