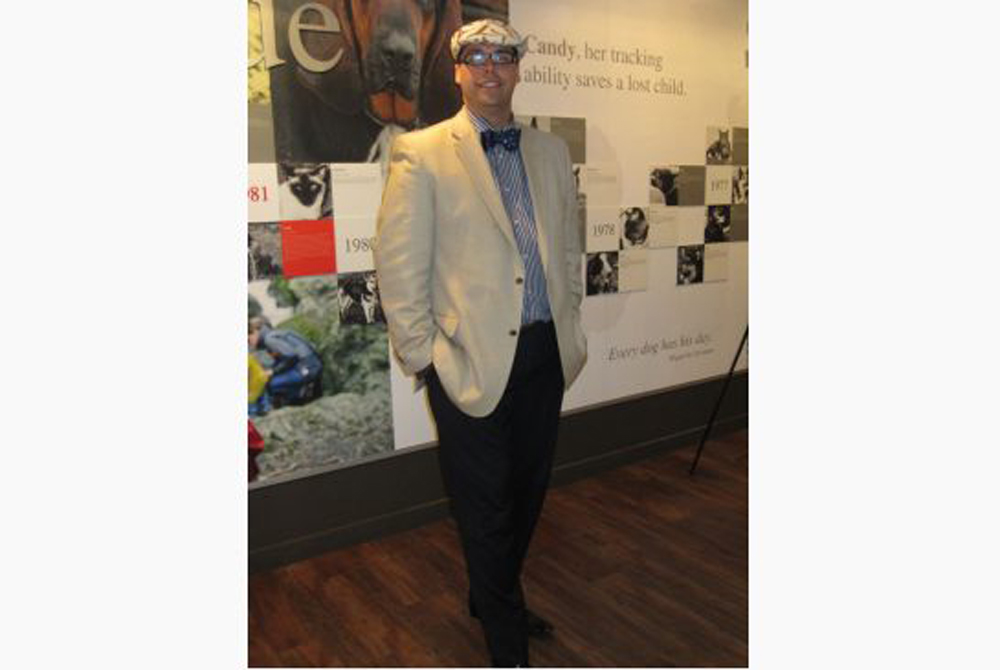 The first time I met David Dunkley was at a swish little cocktail party at the Windsor Arms Hotel. Besides his warm charisma, I was most disarmed by the top hat he wore—an unusually grand fashion statement for a mere ‘after five’ event. Yet Dunkley, one of Canada’s most outstanding milliners, sported the lofty chapeau with such natural aplomb that I began to wish that more modern men would let that degree of style go to their heads. And just a couple of weeks ago, I caught up with Dunkley wearing another, very different top hat, at the Warkworth Lilac Festival’s Mad Hatter luncheon. The heady affair inspired our friendly milliner to concoct a beige, feather-adorned, sky-high number for himself out of sinamay, a natural fibre produced from the banana plant. The over-the-top headpiece was at once ridiculous and sublime—the perfect accoutrement for the occasion. And once again, Dunkley wore it with such ease that it simply made everybody smile.

Dunkley, who studied couture millinery in London, England with the Queen Mother’s former hatmaker Rose Cory, was once a health policy administrator whose passion for headwear took over about a decade ago when he first took a hat-making course. Today, his millinery label, KC’s Hats (located at 998 Bathurst St.), is one of Toronto’s most prestigious, and the designer himself turns heads wherever he goes with his charming chapeaux. I ran into Dunkley again recently at Toronto’s Paws Way for Pet S.O.S., a fund-raiser to assist those who can’t afford to pay their emergency vet bills. Dunkley, who’d lost his own beloved dog not that long ago, came out to lend his support in a jaunty cap he’d fashioned out of vintage, cork-bead embroidered fabric. While he does make some of the most gorgeous contemporary hats around, Dunkley has a penchant for vintage hats, as well as vintage suit jackets. He describes his personal style as “classic, with a twist”, and claims his style trademarks are his hats, of course, and his bow ties. “My new collection included ball caps made of silks and brocades and matching bow ties,” he enthuses.

Dunkley cites Fred Astaire ‘in top hat and tails’ as his biggest style inspiration. And when it comes to the question of whether it’s better to be underdressed or overdressed, he advocates overdressing all the way. “I learned years ago that in my business, it’s best to be ready for any social situation,” says Dunkley. “When I first opened KC’s Hats, I dressed casually when I was working in the studio. One day, I had a five-minute warning that Cheryl Tiegs (the former supermodel) was dropping by. I very quickly change out of my casual attire and vowed always to be ‘at the ready’ in appropriate attire.” The night I ran into Dunkley at the Pet S.O.S. fundraiser, he was wearing a jacket he got from Cunningham and Poupore in Kingston, Ontario, that cost $495.00, teamed with a Egyptian cotton shirt he got at The Bay for $49.00. “That’s my fashion secret,” Dunkley confides. I get these beautifully cut shirts—and the cotton is sublime—and I pop off the cuffs, replacing them with contrasting silk French cuffs.” Dunkley also loves his cufflinks, and that night, was wearing a chic pair created by “Luxurious Links by GG”, which he sells at his shop for $65.00. The silk bow tie he wore was a gift.

As a milliner, I always try to wear a hat that completes my look for the day.  As a creative artist, my personal style has to accommodate the physical needs of my work.  One moment I might have my hands in millinery glue and the next I might be fitting a hat on a client who is off to meet with the Queen – therefore my style has to be extremely versatile.  Bowties create a fashionable pop of colour while not being in the way of my actual work.  Bespoke shirt cuffs and cufflinks complete the look.

Isabella Blow. She wore any damn hat that made her happy!

Wear a hat – it completes an outfit and separates you from the pack.  Your hat doesn’t need to match your garments – let it match your mood!