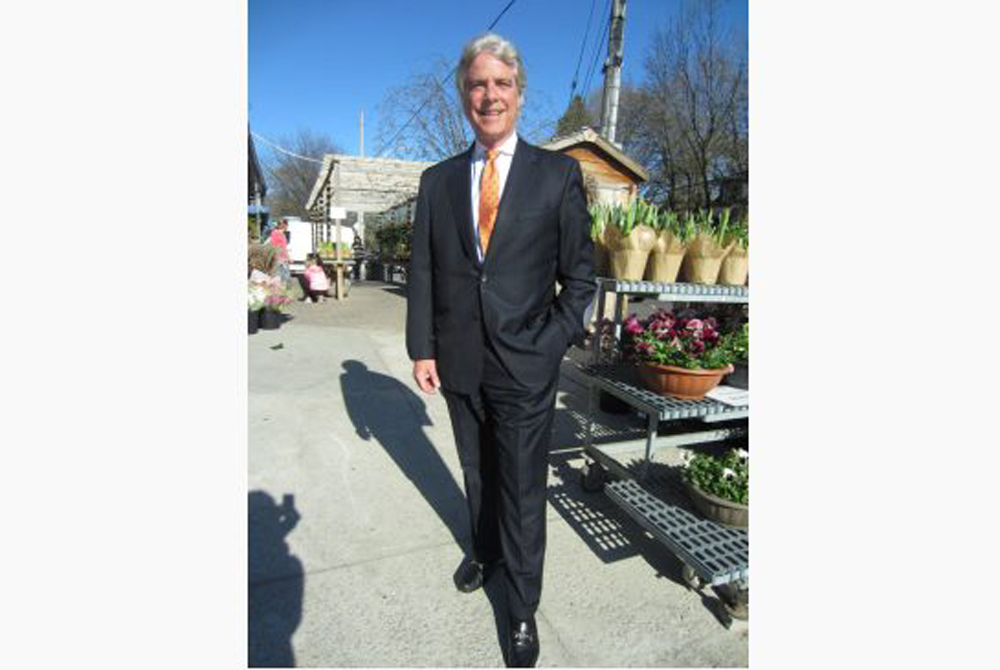 It may sound like an old cliché, but I do love a man in a uniform—especially when that ‘uniform’ is a contemporary, slick sartorial statement that speaks of professionalism and success, with just a hint of whimsy thrown in for good measure. Meet David Townley, a strapping 56 year-old chartered accountant, who specializes in mergers and acquisitions, and whose classic good taste and sharp eye for detail has resulted in a personal style that oozes chic confidence. Townley, the father of three handsome boys in their early ‘20s, was born and raised in Rosedale, where he still resides. He recently caught my eye doing some late afternoon shopping at Summerhill Market. Now I’m sure most women would agree that there’s always something very appealing about seeing a well-dressed man wearing a business suit in a supermarket—the personification of dapper domesticity you might say. But it was David’s elegant aura and conservative, polished, yet understated style that really impressed me most. As British novelist William Somerset Maugham once said: “The well-dressed man is he whose clothes you never notice.” It’s should always be about the man wearing the clothes, not the other way around. Still, smart, quality garments and accessories sure are a bonus.

“I always just want to look clean and well-groomed, happy and healthy,” says David, attributing his no-nonsense approach to his late parents. Describing his style as classic, yet preppy, David cites both Cary Grant and Ralph Lauren as his personal style icons. “Cary Grant for a classic look—Ralph Lauren for fabulous casual,” he explains. When it comes to the question of style over comfort, he admits going for style first, though he firmly believes it’s possible to be both stylish and comfortable at once. David’s favourite places to shop include Brooks Brothers, Harry Rosen, Holt Renfrew, Hermes, and Jos. A. Banks in the States. He has a penchant for vintage, and evidently appreciates fine accessories, owning several classic watches, an eclectic stash of wonderful cufflinks, and “racks” of Hermes ties—which he admits are his weakness. “My great collection of Hermes ties represents various eras of my life, from my teens to now,” he offers. But David’s also adamant about the fact that he’s not one to be driven by designer labels. Still, his biggest piece of fashion advice? “Buy the best that you can afford. Classics are timeless,” he reminds us. David keeps in great shape by doing lots of walking, “and just plain good living”. There’s also something to be said for his great sense of loyalty: He’s been blessed with a good head of hair, and has had it cut by the same barber for over 35 years—Jim Kano at Concepts Hair Salon (Bay and Bloor).

On the day I ran into him, David Townley was wearing a blue pin stripe suit that he purchased at Jos. A. Banks for $1,000; a French white cuff, white collar, light blue chambray Brooks Brothers shirt that cost $150; black Cole Hahn loafers with gold metal bridles that cost $250; Tiffany knotted cufflinks, and a Rolex Submariner watch. What I particularly admired was his whimsical, orange silk, $225 Hermes tie, which featured a subtle print of tiny seals and rabbits. These luxe Hermes ties, which come is a wide variety of motifs, are wonderfully distinctive, and add a great dash of subtle humour and personality to even the most staid and serious suits.

What’s a fashion faux pas in your stylebooks?

Scuffed and unpolished shoes. And shirt tails hanging out.

If you had to, would you rather be over-dressed or under-dressed?

Always over-dressed. You can always say you just came from, or are going to, the office.

What’s your style when you’re at home?