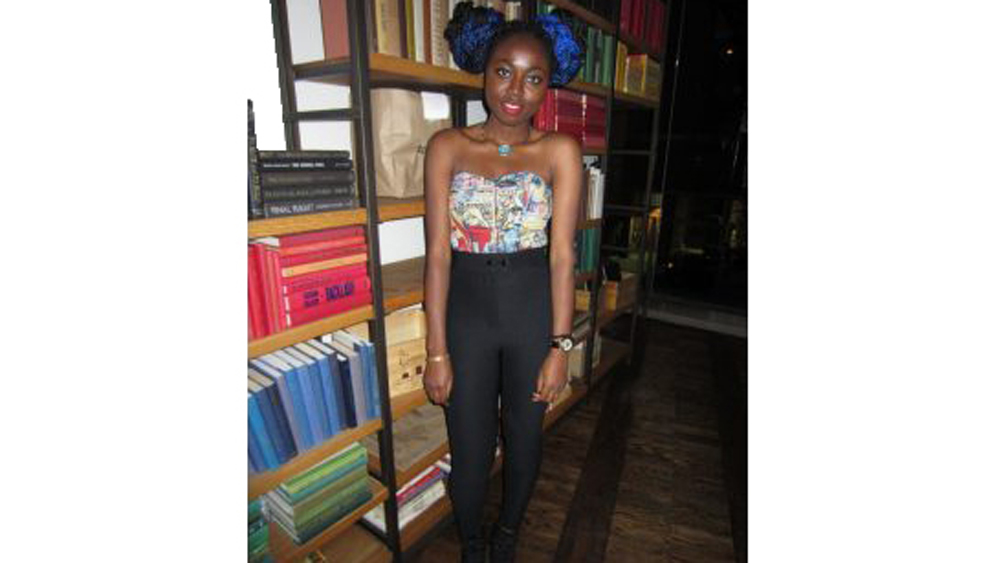 While certain jobs may seem forthright, there are often aspects to them that have a secret appeal. For example, back in 1974, I was engaged as a hostess at Toronto’s Old Spaghetti Factory. As a performer by nature, and an aspiring broadcaster, one of the greatest joys of my job was having the privilege of announcing over the PA system, in my booming voice, things like: “Birenblatt, party of five!!” It may have not been the most creative job in theory, but I worked it in a way that it was, at least for me. And so it is with the delightful Igho Diana Itebu, a striking hostess I recently met at the hip Terroni restaurant, who loves her job because, among other things, it allows her to express herself through her outfits. “As far as my aspirations go, I hope to become a writer, with an emphasis on the spoken word. But whatever career path I do end up choosing, my ultimate goal is to inspire others to always strive to be the best version of themselves they possibly can be,” says 21-year-old Itebu. It’s obvious that this is one young woman who enjoys pulling out all the stops. I was initially bowled over by her wondrous hairstyle, which she prides in having done herself. “My co-workers have gotten too used to me changing my hairstyles now,” she laughs. “They’ve started questioning me if I still wear the same hairstyle for more than a month at a time.”

Born in Nigeria, Itebu moved to Toronto from Vancouver a couple of years ago. But her love of fashion didn’t really start to surface until she reached her teens. “It was in 11th grade,” she recalls. “Before that, I was a huge tomboy and would literally wear my dad’s clothes and shoes to school. But first term of grade 11, I met a guy who complimented me on the one day I felt really ugly. I was wearing a Run DMC hoodie, Bermuda shorts, and Nike high tops. It was an effortless outfit, but he appreciated my style—or lack thereof!! After that day, I started to pay attention to what I wore and how I presented myself.” Itebu says she gradually became more comfortable with who she was. And now, it looks like the sky’s the limit when it comes to her joyful sartorial expression. “I’m an artist in every sense of the word, and my hair is my favourite medium,” she says.

Because she was born in ’91, Itebu says she’s a true ‘90s baby and is obsessed by the decade. “Growing up, I loved everything the women in my family wore, especially my mom and Aunty Beauty… They both seemed like they were in the business of looking good at all times,” she explains. Itebu is also fiercely proud of her African heritage, and adamant about being true to herself first and foremost. “Never dress to impress anyone but yourself,” she states. “If you’re not comfortable with what you’re wearing, everyone can tell.” She can’t afford designer clothing, and is savvy, budget-conscious shopper, who frequents thrift stores—Value Village is one of her favourites—as well as Urban Outfitters, American Apparel, Aldo, independent vintage stores, and a shopping site with an exotic vibe called nakimuli.com.

The night I met the lovely Ms. Itebu, she was wearing a printed bustier she got at Value Village for $5, black riding pants from American Apparel that cost $92, $20 wedge shoes and a $10 necklace she bought at Urban Outfitters, a watch that was a gift, purchased at Aldo, a gold cuff, that was also a gift, assorted rings from H&M, and mismatched heart earrings—the big red one from Aldo, and the small gold one, a gift from her dad, from Nigeria.

It’s definitely a tie between Solange Knowles and Rihanna. They both have very unique and organic styles but at the same time can pull off so many different looks.

Top three accessories of all time?

My hair is definitely #1 it always changes. Next are my earrings–even though I end up loosing one of each pair (which is why I almost never wear two of the same earrings). And lastly, my shoes! I have big feet and I’m extremely flat footed so if/when I do find shoes that fit and are comfortable it’s like Christmas morning for me.

What is the most important or beloved item in your closet?

Mosheta on Queen St. W. A little pricey, but they have the best customer service!
Where do you get your style inspiration?

Mostly on my everyday commute, web interactions or just how I feel when I wake up in the morning. I’m an emotional dresser–if that’s even a ‘thing’!
Jeanne Beker is a contributing editor to the Star and host of FashionTelevision Channel. Email Jeanne@ctv.ca, follow @jeanne_beker, and watch her on CTV, E!, and FashionTelevisionChannel.